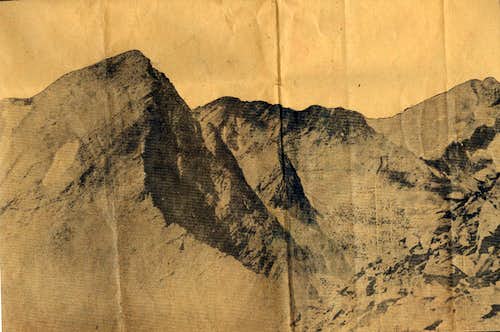 Up at the top of Idaho, supreme among Gem state giants of massive rock, rules Mount William Edgar Borah, mantled now with robes of gleaming snow, defying the elements to cutaway its towering battlements. Pounded by millions of years’ geological transformation, ground under the heel of a mighty, rolling glacier, the lofty peak stands bold and tremendous, Idaho's challenge to the majestic Tetons, the Alps of America.

Not favored by the scenic beauty of thick timber, blue mountain lakes, and long vistas of granite crags rising abruptly from green forests that makes the Sawtooth Range and Lost River mountains an inspiring wonderland, Mount Borah commands a little traveled and only slightly explored area of east central Idaho. Though higher by nearly 600 feet than its closest rival, Mount Hyndman, the dean of state mountains is not spectacular in its soaring glory. Surrounding area is of itself so high that the peak juts out unobtrusively and fails to attract the attention it would if its broad, steep sides of shale were cut in sharp relief in lower ground.

The mountain, named for Idaho's senior senator, is 12,655 feet above sea level at its crest. It is located six miles east of Dickey, a junction point near Willow Creek on the Mackay-Challis highway. Plainly visible to all persons who pass over the road on clear days, winter and summer, the peak is seldom noted by scenery seekers, expecting to find something towering like a church steeple above a city street as the greatest of all crags within the state. From the Snake River valley more than 100 miles to the southeast the crest is occasionally glimpsed as a faint outline of dazzling white fading into deep blue of the lower ridges, marking the Pahsimeroi range, the least known territory of Idaho.

Several other points in the lofty ridge between Big Lost Rive rand the Pahsimeroi valley are only slightly lower than Mount Borah. For some years it was believed that a peak to the south, not named, was the zenith, but since observations and measurements have been taken from Borah's cloud-wreathed brow, it has been determined that the senator's name sake is the king, the lord of altitude.

When the peak was first scaled by a government party in 1912 a bronze tablet was fixed at the top and the latitude and longitude were determined and inscribed. For survey purposes the point was designated at Beauty triangulation station, the name which is found on most old forestry and other government maps. The peak lies within the Lemhi national forest.

During the summer of 1929 while mapping the Bayhorse quadrangle, an area north and east of Mount Borah, a party of three engineers and geologists of the Idaho bureau of mines and geology made several special Sunday trips to investigate the Pahsimeroi giant. Thomas H. Hite, assistant geologist, and John T. Carpenter, field assistant scaled the peak and tramped through surrounding ledges and crests gathering information on rock compositions. Triangulation and determination of altitude was done by Lee Morrison, topographer of the United States geological survey. Many bearings and readings of angles were required from previously located altitudes known as"bench marks" and "triangulation stations." Figures were sent in to the United States department of the interior, geological survey department, and in December of the same year the mountain was christened, one of the oldest points in the state in geological respects, and the newest among named peaks, being less than three years old.

Ascent of Mount Borah is not particularly difficult, and not to be compared with scaling attempts on Castle Peak, Cathedral rock (Heyburn peak) or the hazardous climb up the Grand Teton, Wyoming's pride and the toast of Jackson's Hole. Access to the summit of Borah is not readily gained from the west slope but a fairly good hiker should have little trouble making the trip. Because of snow which lingers long at the summit on the north side the best time to scale the peak is in August or September. Even then patches covering two or three acres remain unmelted. On a climbing trip in September 1929, Hite, Morrison, T.T. Smith, and Bert Buchanan, members of the Morrison topographic party outlined the route now generally taken.

The party left Challis in an auto, driving to Dickey and over Double Springs pass where two large cold springs merge a few feet apart. From the pass the engineers continued to the east and then south to Mahogany ranger station which has an elevation of nearly 9000 feet. After following the road until it became little more than a trail they were forced to leave the car at a sheep camp and start out on foot. A trail up Leatherman pass leads to the rugged ridge on which Borah has its throne. By working up the rugged ridge, a gradual slope, the summit was reached within a few hours. On either side, sheer cliffs drop away hundreds of feet and gigantic slopes of shale rock stretch away miles and miles down into the canyon to the west. To the east the country is more wooded and sharp, giving way in the distance to the Pahsimeroi valley and the typical frontier town of May, where the old west lives on as glamorous as ever.

Comparatively few people have been to the top of Mount Borah but the peak is becoming more popular. The view commanded is magnificent. Craters of the Moon are 50 miles to the south east, nearer lie rough mountains, high valleys, glacial lakes unexplored, and some of the most remarkable geological wonders in the state. Rolling mounds of glacial gravel,Paleozoic strata composed of quartzite and limestone are said to be hundreds of millions of years old, an inconceivable period. The formations were folded in to a great arch or anticline in comparatively recent (tertiary) geologic time. A"v" shaped valley, clearly gouged from mountain peaks by forces of nature, and plainly visible from Mount Borah and nearby points, was carved by the Great Ice Age. Glacial moraine is noticeable in all directions.

Three thousand feet below the top, straggly timber gains a foothold and there are patches of forest here and there a little lower down.Swift streams pour down the sharp declivities, and bright eyed rock conies frisk among the shale near their icy banks. Off to the southwest looms Mount Hyndman, 12,078 feet, for many years thought to be the highest peak in the state. Each peak is visible from other.

On clear days from the summit of Borah the sharp spire of Castle Peak may also be seen. This peak, owing to its cone shape and visibility from a great distance is among the more prominent crags of the state. It is very difficult, if not impossible to scale. Castle Peak, like Borah, lies in Custer County. Rivals of greater charm than ancient Borah Peak are found in the Sawtooth range where Decker peak and Cathedral stand out like gigantic teeth of a cross-cut saw against an azure skyline and catch each glint of a gorgeous crimson sunset. Yet Borah stands triumphant, unbowed by time's crushing blows, guarding the wild Pahsimeroi, holding the secrets of eons in its scarred, proud shoulders -- E-da-how's most successful thrust toward the infinite blue of unattainable heaven.

This article was clipped and tucked away in an envelope in 1932 by Margaret Nelson, my late mother-in-law. - Bob

The Many Faces of Mt Borah