The pride of Idaho! At 12,662 ft Borah Peak is the monarch of the Lost River Range, highest mountain in Idaho.  Known locally as Mount Borah rather than Borah Peak, this mountain boasts nearly 6000 feet of prominence, making it one of the rare prized ultra-prominence peaks. The standard route, aptly named Chickenout Ridge, is a semi-exposed third class scramble in late summer, but early in the season it can be an all-out mountaineering adventure including a narrow snow knife-edge ridge walk. Below the mountain on eastern and western flanks are low rolling grayish green valleys, beyond which rise more snow-covered peaks.

The peak itself consists of bare grey limestone and many of the adjoining peaks carry a similar grey appearance.  Borah was first climbed in 1912 by T. M. Bannon, a USGS surveyor. In 1934 it was named for state senator William Borah aka "The Lion of Idaho" who ran in the presidential election of 1936. On October 28, 1983 a massive earthquake caused the summit to rise 7 feet. For this reason the true elevation of the peak may be higher than what is indicated on maps. The current fastest ascent/descent was done by Luke Nelson on October 22, 2010. His round-trip time was 2 hours 21 minutes and 11 seconds. Fastest Known Time

The standard route which begins in Birch Springs involves ascending 5,262 vertical feet from the trailhead to the summit in 4.1 miles. Most people do the climb in a single day. The scramble on Chickenout Ridge is the most famous route feature in all of Idaho. Many a hiker has returned home with the unfortunate story of how they had to turn around at the crux of the route. But it is important to listen to your gut and know when to turn around.  There are also numerous technical routes on several sides of the mountain.  See the routes section for more information. 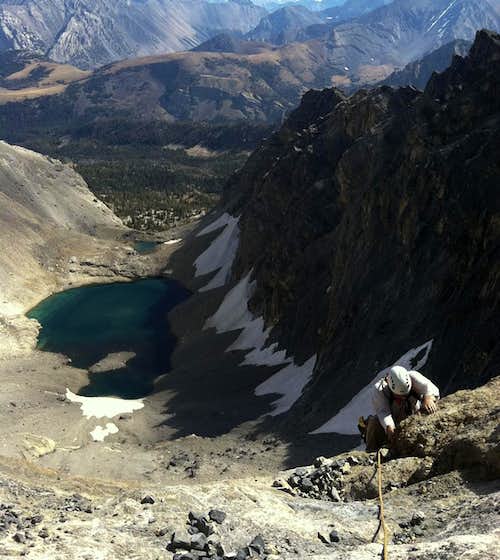 A Technical Route on the East Face

The truth about Chickenout Ridge is that it's not as difficult or exposed as all the hype makes it out to be. If the average hiker who has never ventured beyond a trail, or felt the thrill of exposure, attempts Chickenout Ridge, they might be scared out of their wits. But if the seasoned mountaineer comes to climb Borah he will likely end up scratching his head, wondering if that was Chickenout Ridge or if it is still yet to come on the remaining distance to the summit.

Beginning at Birch Springs follow the trail east through pine forest and sage brush. There are a few minor switchbacks but the grade remains steep. The trail gains the crest of the southwest ridge at 8600 feet. Trees thin out and are no more above 9500 feet. At 11,200 feet you will reach the scramble section which is the crux. People who don't like exposure should turn around here. 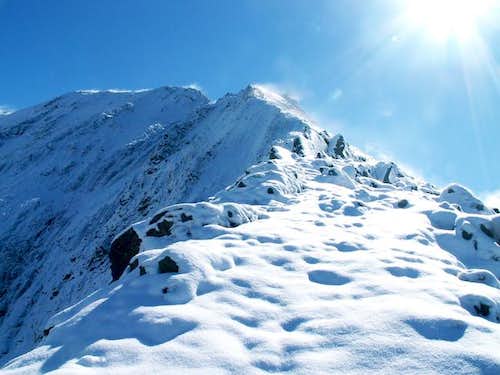 Pick the line of least resistance. There are options on the left side of the ridge, the right side and on the spine, as well as various combinations. Generally speaking the rock is solid and trustworthy, considering how many thousands of people have been through it. 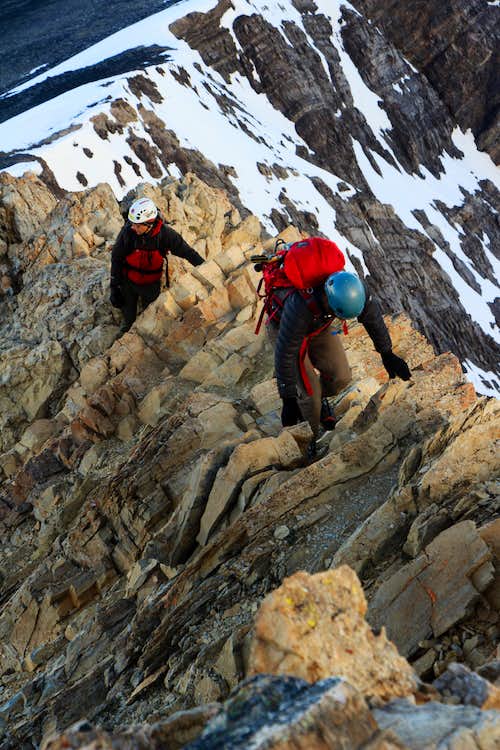 At the far end of the scramble section there is a steep step to scramble down. The next part of the ridge is narrow and this is where the snow knife-edge exists in early season. Many trip reports call this a "snow bridge", but it should not be confused with the natural formation which spans a crevasse on a glacier. Exercise caution here. 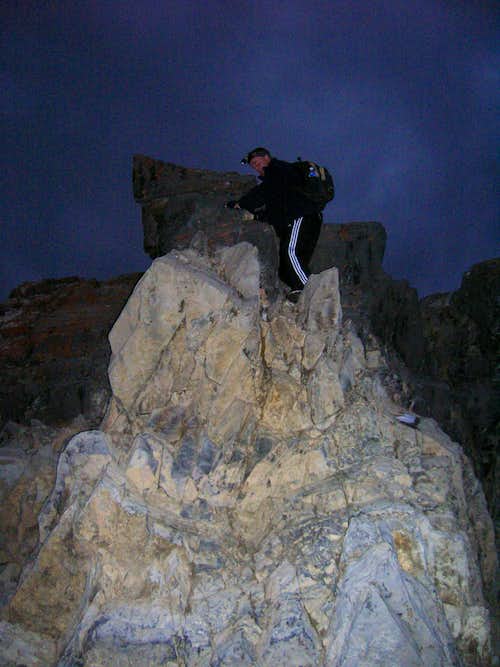 Another View of the Crux Section

Beyond the narrow section you will come to the continuance of the trail as it traverses slightly down and turns north to bypass a high point on the ridge. At 11,750 feet the trail will regain the crest of the ridge and point you in the right direction for the remaining scramble to the summit. 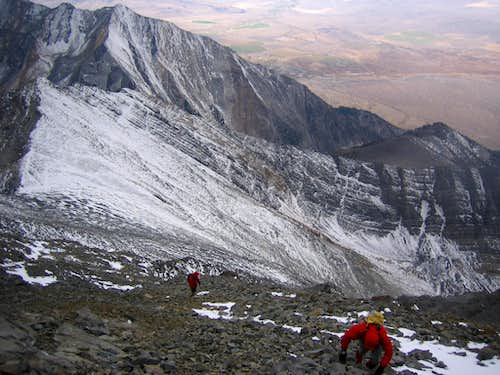 The remaining southwest slope consists of bare slabs, ledges, scree and talus. Once again pick the line of least resistance and ascend in a northerly direction while being careful not to knock loose rocks down onto your partners. As of June 2014, there was a register on the summit. Please do not leave trash anywhere on the route and that includes trinkets or flags on the summit. 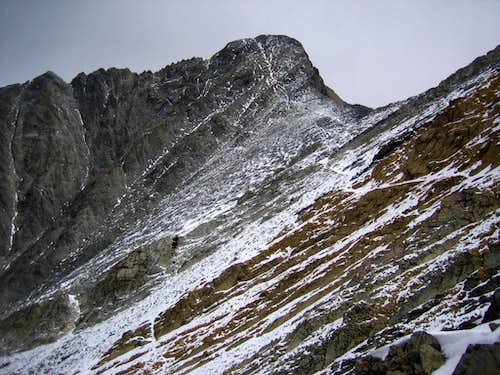 From Mackay Take U.S. Highway 93 21 miles north of Mackay to the Borah Peak Access Road (Birch Springs Road). This is between mileposts 129 and 130. Follow this road east for 3 miles to the trailhead. 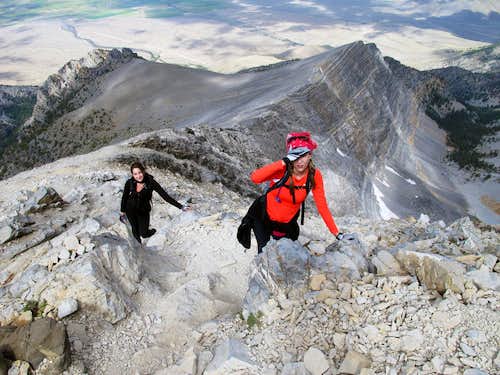 Scrambling On Chickenout Ridge
From Challis Take U.S. Highway 93 south of Challis 33 miles to the Borah Peak Access Road. This is between mileposts 129 and 130. Follow this road east for 3 miles to the trailhead. In good weather, the road is fine for most passenger cars. Reach a flat parking area and a climber's trailhead. The trailhead is unmarked, but is obvious from the parking area. The trail leaves from the uphill side (east) of the parking lot.
From Ketchum/Sun Valley (Highway 75)
Trail Creek road is one of the most scenic backcountry roads in Idaho that can be negotiated in a passenger vehicle and it's only a 50 mile drive to the bottom of Mt Borah from Ketchum or Sun Valley, Idaho. This breathtaking drive starts on pavement and ends on pavement but in-between it's gravel and narrows to a (white-knuckle) single lane road as it climbs nearly 1000' to Trail Creek summit. The gravel section can be pretty smooth after the road is freshly graded but later can turn into a tooth-rattling, dirt-eating, tire-flattening experience if washboard conditions develop. This is a seasonal road that closes in late fall and does not open until it's been plowed in the spring. If you watch the map closely you can cut about five miles off this drive by turning north on the Chilly shortcut before you get to Highway 93.

The mountain is located in the Challis National Forest. To camp in the campground at the trailhead requires a $5 fee.
There are several nice camp sites near the trailhead. A toilet is available, but unfortunately there is no water. The elevation here is 7,200 feet so it gets cold at night.
The Joe T. Fallini Campground (formerly Mackay Reservoir Recreation Site) is the only recreational site in Challis that offers full RV hookups and features a diversity of other facilities.

When to climb Mt Borah 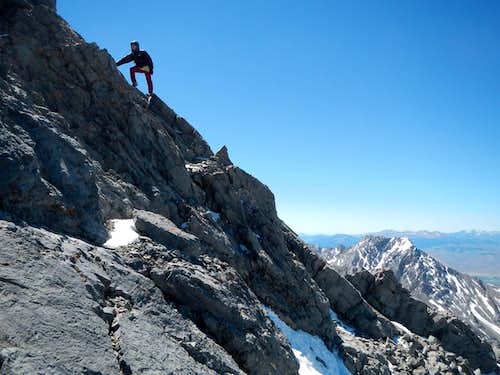 Idaho A Climbing Guide The site contains a detailed guide to Borah's standard route as well as information on climbing throughout Idaho.
Lost River Camera
NOAA 7-Day Point Forecast for 11,103'

Get up-to-date conditions or find partners by posting on the Idaho Outdoors Forum.

Before climbing Borah Peak, I spent a lot of time researching the climb. Most of the posts mentioned Chicken-out Ridge but only briefly described the final section of the climb--the last approximately 800 feet leading to the summit. I found this section much more challenging than Chicken-out Ridge. Despite it's reputation, Chicken-out Ridge consists of fairly stable, secure rock. The last 800 feet of climb beyond Chicken-out Ridge, however, is very steep, covered in loose rock, and, at times, doesn't have a lot of good foot holds. If you take your time, climb carefully, and exercise caution, you'll be fine. But don't underestimate this last section.

The ice mass on the north slope of Mount Borah was officially named Borah Glacier in Feb 2021 by the Salmon-Challis National Forest. It is the only glacier in the state of Idaho. https://idahonews.com/news/local/idahos-only-active-glacier-officially-has-a-name-borah-glacier

Thank you for sharing this news and link.