Funny thing was, my backpack custom loaded with just the right gear was already in the car. A week ago, I'd rushed downstairs at 3 am with the pack, hopped in the car, and only realized that the day would be rain-soaked after driving a few miles. Darn it! Drove home, crawled into bed and regretted my "carbo-loading" meal of the night before.

Therefore, when the weekend came and the weather forecast was good, it was time to once again consider: The Wieder Route!

This route is also called the "kleine Ostwand" or more fully, the "kleine Watzmann Ostwand," by which people mean the little version of the (neat! famous!) Watzmann East Face. It doesn't climb to the true summit, but rather the middle summit. The difficulties are less sustained than the famous Ostwand, and the route-finding easier. Hilariously, there is a peak called the Kleiner Watzmann right next door, so it's easy to confuse people. "Wait, are you talking about the little-climbed and unremarkable east face of the Kleiner Watzmann or are you referring to the miniature version of the Watzmann East Face on the Middle Summit of the Watzmann massif?" 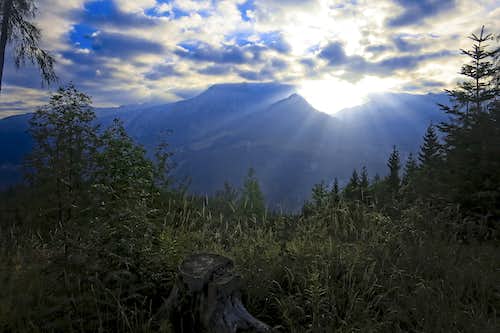 This time I mean it

I was walking from a parking lot (~620 meters) near Königsee at about 6:20. A steep switchbacking road under the Grünstein, then turning south and up through quiet forest to the plateau below the Kühroint Hütte (1420 meters). They offered an incredible buffet breakfast with coffee for 10 euros. Amazing. Working toaster and lots of butter, yes!

Many parties taking photos here and marching off to the Watzmann. A beautiful little chapel dedicated to Mary and Jesus, down from the cross and in her arms. I continued on a muddy trail which circled slowly around the forested slopes of the valley draining from between the Watzmann and his children, the Watzmannkar. A side trail led me up into this valley. I wasn't sure exactly when to leave the trail, but tantalizing glimpses of the great wall of Watzmann propelled me higher, and ever on the lookout for the distinctive long ramp which is the signifier of the Wieder Route. Apparently it can be walked, but one is tempted to use hands. At times, sliding snow blocks make the ascent more interesting. Almost like a cheap video game conception of mountain climbing...dodging icy chunks of snow! 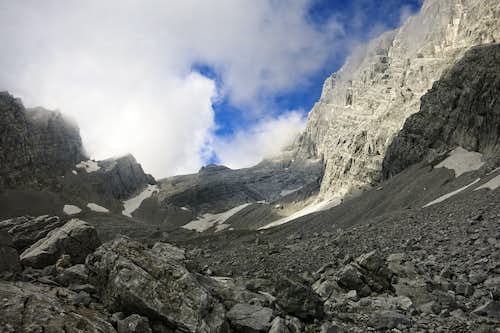 I lost patience with the trail, and exited for scree and boulder-hopping rather too early. I climbed over a moraine then saw there was still a long way to go across morainal slopes before it made sense to head up for the start of the route, which is under the middle of the distinctive ramp. Without an ice axe, and wearing running shoes, I was poorly outfit for real firn-arbeit. (that means hard-snow work. I just kept one word in german because it sounds cool, amirite?)

I presented a herd of mountain deer with a problem, but they solved it in their usual way. Maintain maximal possible distance from the strange loping figure. I then hiked snow, then scree up to the start of the route. There were about 8 people milling around. Some below me, some above and starting the climb. I met two German guys from Kiel at the start of the route. They were funny. One of them put on his climbing harness, which was of the lightweight-ski-harness style. Very skimpy, rather colorful and reminiscent of lingerie. Noticing my gaze, he said "and this works well in the bedroom!"

I told him I had the same harness exactly, and that I chose it for precisely that reason. Chuckle!

Being alone however, I left this sexy harness at home. I tightened my shoes and started up. The initial gully is nice, despite looking loose and unattractive below. At the end is a belay station and a short but fun grade III- section. I had to concentrate sufficiently in my shoes that I resolved to use my rock shoes at higher cruxes. It's just more fun! 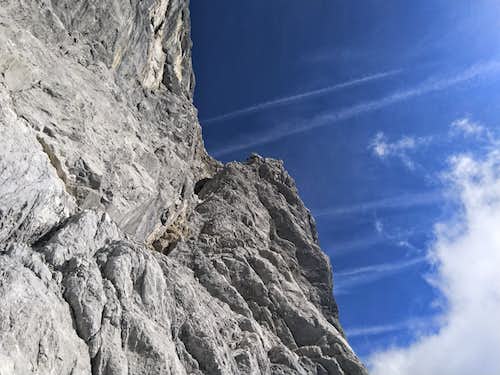 Little steinmänner (cairns) marked the way on a descending ledge for some 100 meters until the famous ramp could be gained. This ramp was quite fun. You can venture onto the smoothest looking rock where you may want to use your hands climbing the slab. You can then veer back into deep runnels that approach steep hiking in tone. At the midpoint is a small snowfield threatening to slide down in a dramatic swan song. Somewhere along the way was a short vertical step where holds are nonetheless abundant. It's just a fun time in here. Above, climbers scrambled through the notch between a tooth of rock and the main face, seeming to move in slow motion purely for my benefit. "Wow," I thought dutifully. 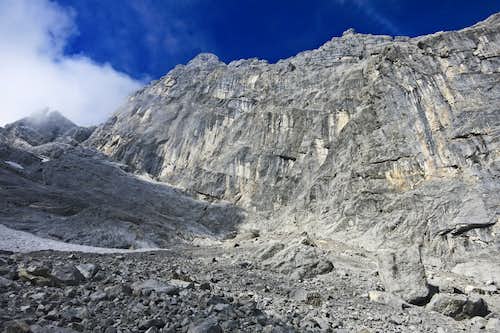 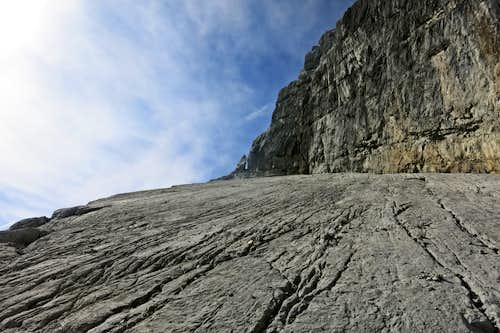 I'd love to see a car here. 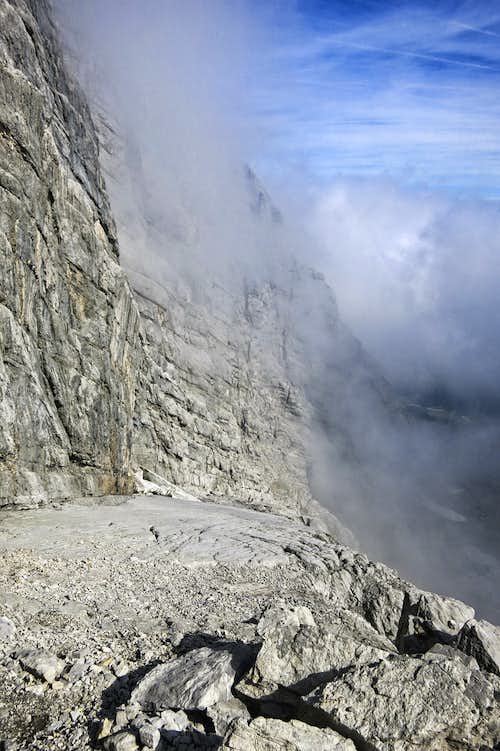 Life on the face

Life settled into a rythym, as it does. At the top of the ramp, a cairn. Slightly around the corner, then up another grade III- chimney/gully. Wonderful climbing here. Clouds below, birds and sun. I had the place to myself. Another enjoyable scramble up and right, then a ramp walk around to a point where a long but compact gully continues up as far as can be seen.

I climbed variations in here, enjoying the way I could feel where others went and where they didn't by the relative cleanliness of the rock, by the absence of lichen. It was very silent here, and I never heard any rockfall.

Higher, a ridge decorated with cairns came up, and it was necessary to climb another steeper (but very compact) step. Here, I got a bit confused and ended up unecessarily climbing a wonderful chimney to a compact buttress. "Hmm, that might be grade III above me, but it could also be V or VI!" I thought. This is usually a sign that what you are looking at is wildly wrong. See, I always imagine myself slightly inadequate to the situation at hand, and this leads to a habitual under-rating of whatever I'm looking at. I'm usually sure that it scares me far more than it should scare anyone. So I might call a grade VII a V+, thinking that I'm just lacking in intestinal fortitude. This trait can get you in trouble if you are lost! 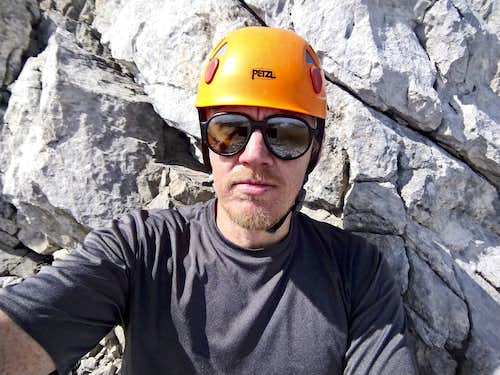 Anyway, I was pretty sure I was lost. I saw a cairn around the corner and below me that I could easily reach. I also heard voices that seemed to come from that direction. So I climbed down an easier way to the cairn and walked around the corner. Sure enough, there was much easier ground over here, and a couple of fellows scrambling together.

Life is like that! You think it is what it is, it's hard, just deal with it. But people have it so much easier. I think the problem is not that I don't know where to go, it's that I don't know how to be satisfied with the simple. I seem to need a problem. Are you like this? Maybe this is a climber trait? After all, we insist on climbing grungy and forgotten routes.

Ah well. So I followed these nice fellows easily around and up. On the final ridge, they climbed a steep slabby buttress. Wow! I went up to it, realized it was easy enough and started up. It was very exposed, and I think, the highlight of the long and easy route. Looking down, I saw snatches of the Königsee, and the great gulf of space below the full Ostwand route. Step, step, hand. Done!

Peeking over the ridge I was immediately cold in a chill wind. Nice people with via ferrata gear wandered to and fro, the Middle Summit being a rest station between the true summit and the north summit, called Hocheck. I admired the fresh snow in the Hohe Tauern to the south. Clouds filled the basin below me and over the Königsee. But the ridges were clear, sharp and wonderful. 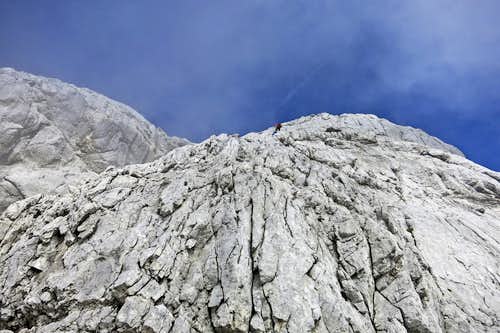 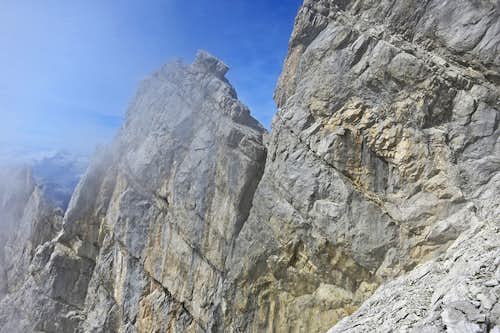 Well, down and then back up to Hocheck. A poor woman napped on wooden boards before the small emergency hut at this summit. By poor I mean, perhaps, miserable. She was probably waiting for a star-struck friend who went to bag the true summit and promised to pick her up on the return trip? I don't like these arrangements very much. Waiting for hours up high is just bad mojo I think.

Having cast my judgments, I could descent, ego newly enlivened by the activity. Ah. Gosh though, it's a long way down from Hocheck to the Watzmannhaus. About 700 meters of descent, and all of it intolerably stoney. I see why British climbers of the 19th century seemed to avoid these eastern lands. You've really got to do some climbing in order to find the endless boulder-wrangling worthwhile.

Even as I say that I know it's not true. I've learned to enjoy "normal routes," with their long forest walks, endless scree fields, etc. You just need to approach them differently. More meditative, more in tune with the forces that built these structures. Where do they rest now, after their labors? 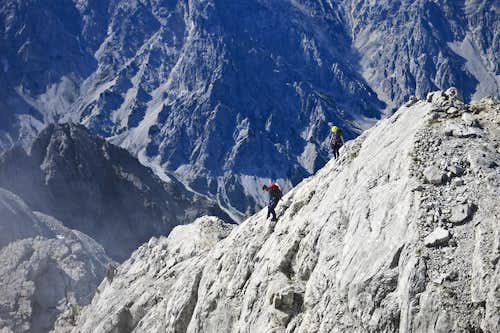 People on the ridge 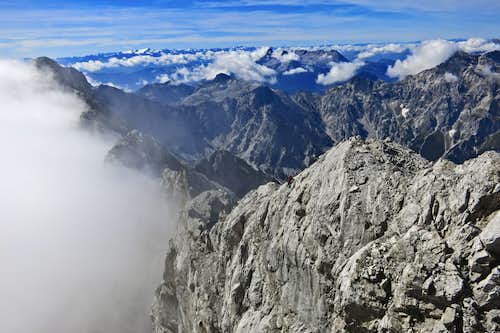 Ridge to the main summit

I descended to the Falzalm, turning right to get below the Watzmannkar again. I followed the muddy, slippery trail past my earlier exit point to the Kühroint Hütte, where I enjoyed Bier and Apfelstruedel. Then I started down the final 800 meters to the car, enlivened by a wonderful conversation between David Lynch and Russell Brand (link). I reached it at 17:30, 11 hours after I started, with 2200 meters gain and loss under my feet.

Thanks Watzmann. Thanks world, it was fun, yet again. 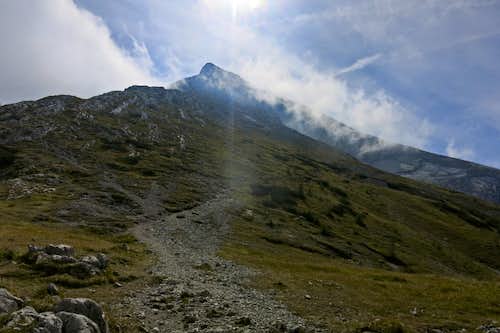 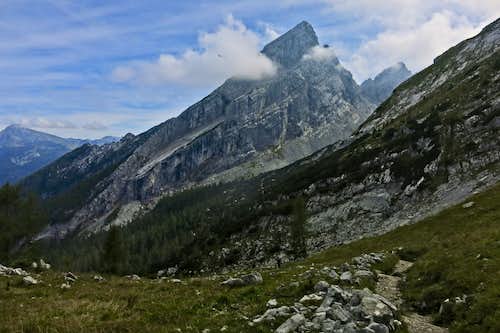