The 1509m summit stands on the main ridge of the Giant Mountains (Karkonosze/Krkonoše/Riesengebirge), which forms part of the southwest boundary of the historic province of Silesia. Before 1938 through the summit ran the border between Germany and Czechoslovakia, and after 1945 between Poland and Czechoslovakia. Since 1993 this border has separated Poland from the Czech Republic. In Poland the summit is known as Wielki Szyszak (Great Helmet), but this name is actually the result of a mistake made by Polish cartographers just after World War II. The Czech name of the mountain, Vysoké Kolo, and the German name, Hohes Rad, both translate as High Wheel. The original Great Helmet, that is to say Velky Šišak/Große Sturmhaube, sits just east of Vysoké Kolo/Hohes Rad, at 1424m. Its Polish name is Śmielec. Wielki Szyszak/Vysoké Kolo/Hohes Rad is the fourth highest and the highest granite summit in the Giant Mountains (and in all of the Sudetes). It is the highpoint of the Western Giant Mountains, which extend west from the pass named Karkonoska Przełęcz/Slezské sedlo. The prominence of the summit is 331m. Its top as well as its eastern and northern slopes are covered with a superb blockfield. The mountain looks best when viewed from the northeast. Seen from the west the summit appears to be just a low, elongated knob, rising a mere few metres above the broad, slightly undulating surface of the main ridge of the mountains. On the very top of Wielki Szyszak/Vysoké Kolo/Hohes Rad stands a structure which may appear to be a cairn. In fact, this is the vestige of a monument to William I, emperor of Germany. The monument was erected in 1888 and demolished after World War II. What it looked like can be seen here.

The Karkonosze range rises on the south outskirts of the city of Jelenia Góra. My favourite trailhead for Wielki Szyszak and Śnieżne Kotły is at the bus stop/car park called "Dom Hauptmanna" (Hauptmann's House), in front of the house in which Gerhart Hauptman, a renowned German writer and Nobel Prize winner spent the last few years of his life. You can get there on a number 15 bus. (A ride from the main railway station takes less than forty minutes.) From Hauptmann's House it takes about three hours to get to the top of Wielki Szyszak/Śnieżne Kotły. The total elevation gain will be nearly 1000m. If you leave the blue trail at the first trail junction and follow the black trail, you will soon hike along a pleasurable path along Wrzosówka brook leading to Czarny Kocioł Jagniątkowski. Another convenient starting point will be either near the centre of the resort of Szklarska Poręba or at Szklarka Falls (an enclave of the national park), between Szklarska Poręba and Piechowice. However, ascending Wielki Szyszak from the west is nowhere near as fun as an easterly ascent.  If you are staying in the hut northwest of Łabski Szczyt (Schronisko pod Łabskim Szczytem), the hike will take just about one hour.

You will probably start your hike in the resort of Špindlerův Mlýn. To get there, leave Road I/14 at the town of Vrchlabí and drive north up Road 295 for about ten miles. If you are staying in the hut southeast of Łabski Szczyt (Martinova bouda), the hike will take just about one hour.

You can make use of this route planner. Just copy and paste "Śnieżne Kotły" instead of Wielki Szyszak/Vysoké Kolo. And here is the glossary for the route planner: z – from do – to dodaj punkt pośredni – add a point en route odwróć trasę – reverse the route

If you do not go in winter, it is a really good idea to combine an ascent of Wielki Szyszak with a visit (via the green trail called “Ścieżka nad Reglami”, i.e. Path Above The Forest Zone) to all three corries nearby. Czarny Kocioł Jagniątkowski can be visited all year round, but the trail running through Śnieżne Kotły is closed until 31 May. At present no waymarked trail leads to the very top of Wielki Szyszak, which means that you are not allowed to get there since the Giant Mountains are a national park. The top of the mountain is protected due to its being a nesting place of some rare species of little birds. The waymarked trail, which is closed for winter, traverses the northern, Polish side of the mountain well below its summit. In winter, you are supposed to follow the traverse of the southern, Czech side of the mountain, which is marked with wooden poles. It is not clear if it is still illegal to summit under winter conditions. The most reasonable way of doing this is to ascend from the east, from the pass between Wielki Szyszak/Vysoké Kolo and Śmielec/Velky Šišak, first along the winter, Czech route, then more or less along the border – most likely along someone else's track. If there is not much snow the zigzagging old trail, laid towards the end of the 19th century, may show in places.

The area is part of a national park (or rather two parks: Karkonoski Park Narodowy in Poland and Krkonošský národní park in the Czech Republic; in Poland there is an entrance fee - an equivalent of approx. 1.2 euros for a day pass in 2014). You are not allowed to camp/bivouac or stray from the waymarked trails. The trails traverse the sides of the mountain, whose top is specially protected. The main reason seems to be the importance of the site for the breeding of some rare bird species. In winter and early spring the following trails are closed: 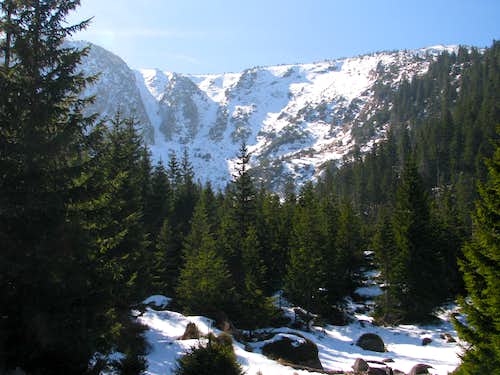 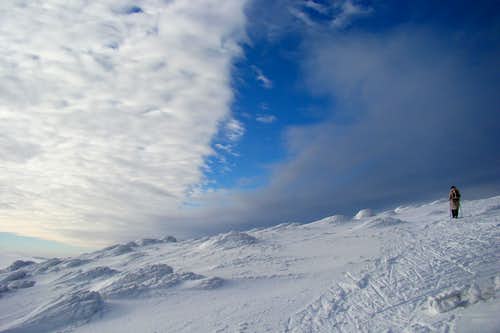 On the winter traverse (photo by jandamart)