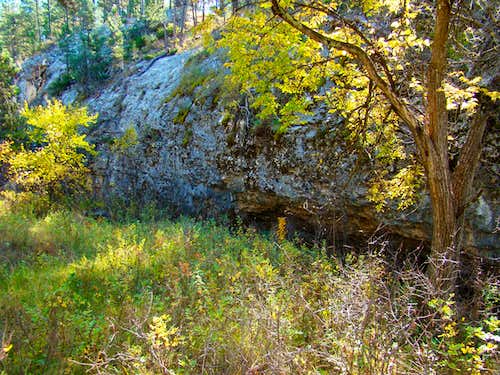 Wildcat Canyon is a beautiful little canyon northwest of Hot Springs that has been seeing increasing interest from Black Hills canyon explorers. For those who like to explore, opportunities exist to find ancient dinosaur tracks in the canyon, view wildlife or explore one of the many caves in the limestone walls. Those caves are one of the remarkable characteristics of Wildcat Canyon. Perhaps the most remarkable of these caves is Onyx Cave, frequently visited by area cavers. Most of the canyon walls are less than 100 feet high, though there are a few places the walls approach 200 feet. The canyon portion of the watershed runs about 4.5 miles from Song Dog Road to the mouth of the canyon in the west side of Cold Brook Canyon on the old Lady C Ranch, dropping nearly 500 feet in altitude in that distance. There is no regular stream flow in the canyon, but there are springs in various places – generally at the bottom of the highest limestone walls in bends of the canyon. The canyon can be a dangerous place to be during flash floods. 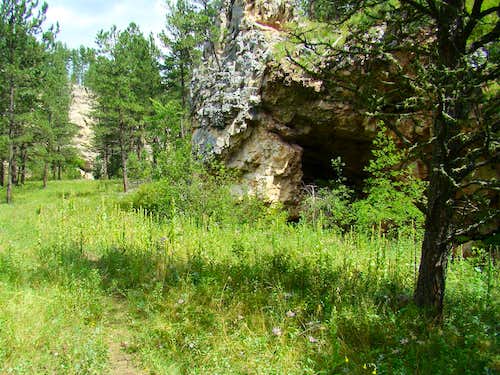 The entire length of the canyon portion of Wildcat Creek is now on public lands since the addition of the Lady C Ranch lands. A century ago, when this was all private ranch land, there were numerous roads through the forests and meadows. Most are only traces at best now, but some still provide routes for side excursions out of the canyon, particularly to the south where another sizable canyon system begs to be explored. However, if you choose to do that, be sure to study good topo, terrain and satellite maps before your explorations. A good compass and a dependable GPS are also advisable. 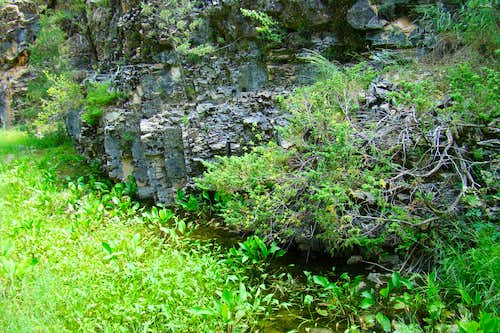 Ponderosa pine, ash, cottonwood and aspen are found in and along the canyon. The forest is managed by the Black Hills National Forest (605) 673-9200. Deer and elk are abundant in the area, though the elk remain somewhat reclusive. These are the same elk that migrate to and from Wind Cave National Park to the north and east. Pronghorns may be seen here, though less frequently. There is a mountain lion population around the canyon and though rarely seen, they leave evidence in the form of tracks and scat. Most of the snakes seen in the canyon are harmless, but some rattlesnakes do reside in the area, so caution is warranted. The large number and variety of birds seen and heard in the canyon would seem to make this a great location for bird watchers. Sometimes cattle are seen grazing in various parts of the area, but there is no way to tell when or where you will encounter them.

There are no official trails in the canyon. The lower part of the canyon at one time had a 2-track road through it, originating at the Lady C Ranch. But there are only faint traces of that old road left. The grade for that old roadbed is mostly still intact, though overgrown with grasses. Mountain bikers often visit the canyon and have left a mostly narrow trail that can be followed through the upper half of the canyon. At one time, there was a mountain bike race that centered on the Wildcat Canyon area. 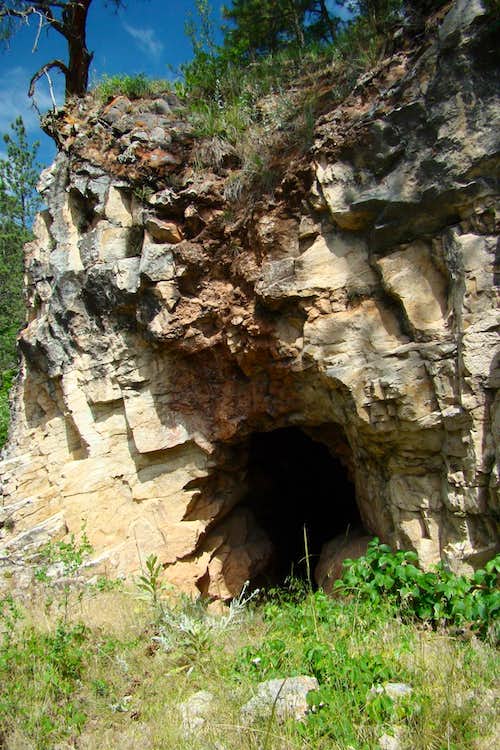 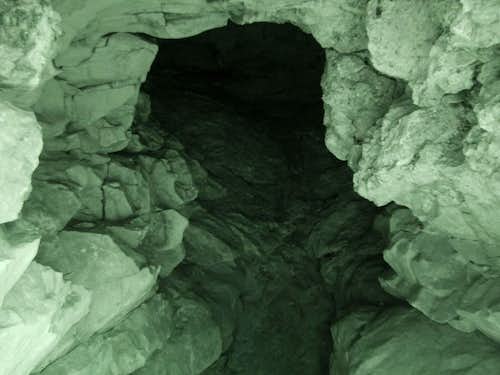 Onyx Cave lies in the upper half of Wildcat Canyon and is probably the only cave in the canyon that sees visitors every year. Long ago, there were buildings on site by the cave. Onyx Cave was a regular tourist attraction in the early days of Hot Springs, more than a century ago when Hot Springs was the premier tourist spot in the Black Hills. One report in 1897 stated Onyx Cave rivaled Wind Cave in everything but size. Part 5 of “The Black Hills Illustrated” reported in 1903, “Onyx Cave is also well worthy of a visit and is very unique in its formations of pillars and columns, stalactites and stalagmites.” The cave’s name was derived from onyx deposits in the area. Agates were also found to be plentiful in the area. Both stones are varieties of chalcedony. The Digital Library of South Dakota provides this link to a copyrighted old photo of the cave’s stalactites: 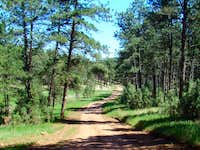 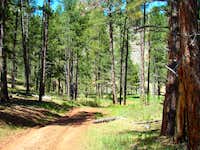 Forest Service Road 682.2N will take visitors close to the mid-point of the canyon floor. This allows hikers and explorers to do several “out-and-back” options for the upper and lower portions of the canyon. To get to FSR682.2N, travel approximately 1.5 miles north of Hot Springs on Highway 385 to Argyle Road and turn west. Follow Argyle Road for 6 miles, then turn north on Song Dog Road and go .8 mile to FSR 682.2N. It is .4 mile to the fork in the road, with FSR682.2N going to the right and FSR682.2Q going to the left. 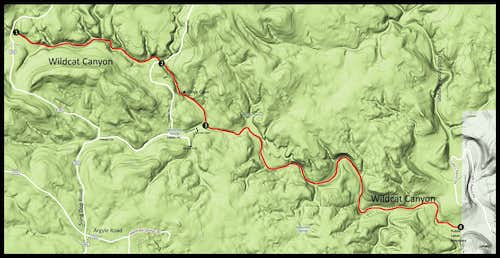 Perhaps the best way to reference route options is from the current access points. The map above will show four access points from which hikers could make exploration route choices, though the fourth would require property owner permission. 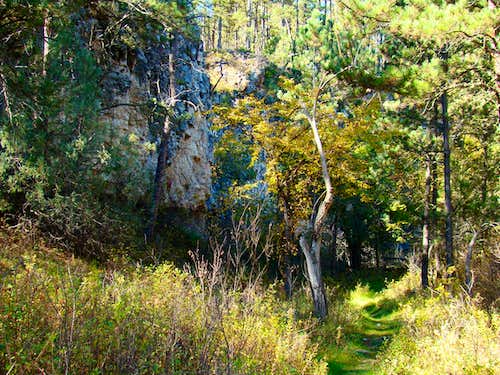 Access Point 1 - The head of the canyon at song Dog Road:
For a 4.5-mile (one-way) out-and-back from the west, you can travel one mile north past FSR682.2N and park alongside the road there. This is just above where the watershed turns into a canyon. Following the canyon 4.5 miles downstream will take you to the mouth of the canyon where it joins Cold Brook Canyon. You will encounter “no trespassing” private property less than a quarter-mile from where Wildcat Creek joins Cold Brook Canyon. Of course, you can also do an out-and-back of any shorter length you wish from this access point too.


Access Point 2 - FSR682.2Q through the floor in the upper half of the canyon:
Out-and-back options from here would be to Song Dog Road for a one-way hike of 1.4 miles; or a 3.1 miles (one-way) hike to the canyon mouth and back. You could do the second loop route described above, but starting your hike from this point instead. If you just want to do a short loop to see Onyx Cave and a short section of the canyon, you can hike over to Access Point 3, then up to the junction of FSR682.2N & FSR682.2Q, then back to Access Point 2 for a 1.7-mile loop. 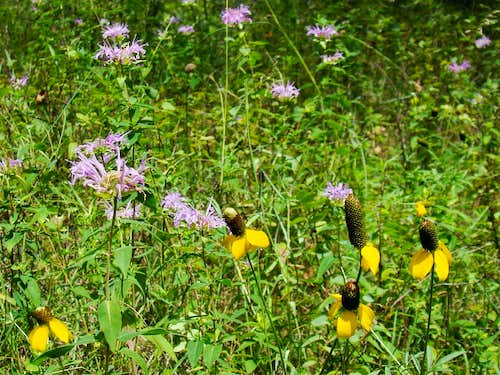 Access Point 3 - The end of FSR682.2N plus an old unmarked road into the canyon:
An out-and-back from here to Song Dog Road is 1.9 miles (one-way), and an out-and-back from here to the canyon mouth is 2.6 miles (one-way). You can also do any of the loop routes listed above that include Access Point 3. There is generally very little traffic on Song Dog Road and even less on FSR682.2N and FSR682.2Q. So, it’s very possible that if you choose to do any loop hike, you will have these roads to yourself.

Since this is national forest land, the canyon can be accessed year-around without any permits. It is when people want to use firearms or build campfires where potential problems could arise. Fossils and unusual rocks are abundant in the area, but removal of fossils and rocks from public lands is illegal. Carrying guns is legal, but if you carry a rifle that is specific for use in a particular hunting season that is in progress, and you have no license to hunt, you could wind up with a huge fine. If you are concerned about the mountain lions in the area, pepper spray is legal year-around. 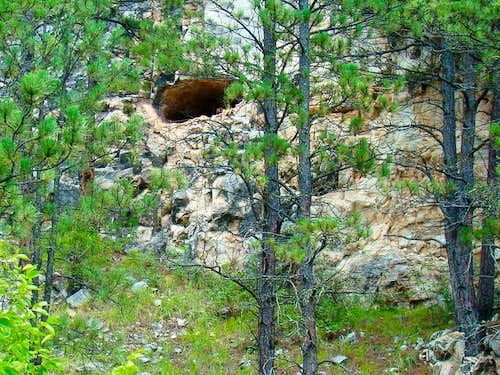 Curious marmot peaks out of a cave in Wildcat Canyon 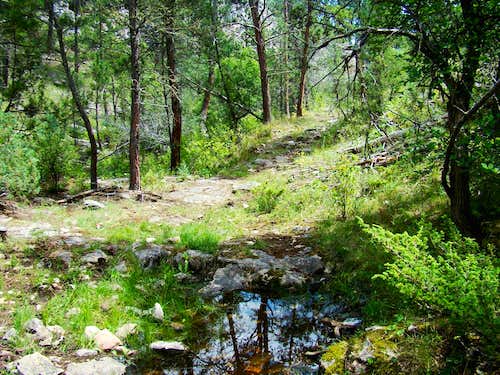 A small spring along the trail in Wildcat Canyon

The area can be explored year-around, weather permitting. Blizzards and heavy snow can make the canyon floor almost impassable, and summer heat will require plenty of hydration for your health. You cannot count on the canyon springs to be bacteria-free, so bring plenty of water. Because of flash flood potential, you will want to stay up-to-date on the weather. You can find out more by clicking here:


Hunting seasons do impact visits to the canyon. For more information on South Dakota hunting seasons and regulations, check out this link: Black Hills Hunting Seasons 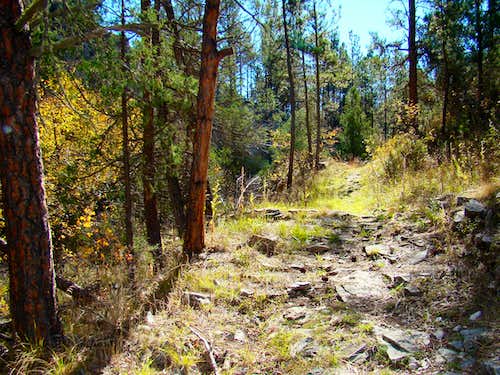 Camping in the National Forest portions of Wildcat Canyon is regulated by:

For other nearby camping options, check out the links below: