Add your best shot of the Death Valley area

Ok, it's been hazy and hot around here for a while with summer temps and massive fires blazing up for weeks in the hills and Cache Creek Wilderness off to the east of Clear Lake.
So here's another "best shot" album of a popular National Park. Let's see if it gets any legs.

It can be your favorite regardless of votes. I go by hits much more than votes since only a fraction of SPers usually vote. 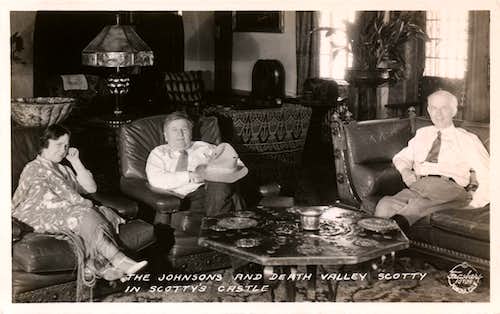 The Johnsons and Death Valley Scotty (center)
The high in Death Valley today is 119 degrees. Aug 19 '15, a pretty hot summer day. They have 30 to 50 a year 120 or over.
Highest recorded temp there is 134 on July 10 2013 which is the highest ever recorded on earth.
Sometimes when it gets to rain the heat rising off the valley blows the rain back into the sky before it hits the ground.
Death Valley has a scarp relief elevation of over 20,000 ' from the top of Telescope Peak (11,049') to the east side of Death Valley. This is because the rock continues down another 10,000' from the east slope of Telescope Peak as the valley is full of sediment.
Some of the big ridges coming down to Death Valley from the Black Mountains are ancient exposed rock called Turtlebacks. They date back over 2 bill. about the time the atmosphere became breathable.
Dozens of scenes from Star Wars were filmed in Death Valley.
Charles Manson and Co. were hold up on the Barker Ranch in Death Valley after the infamous murders.
Lowest place in western hemisphere  -282' sea level.
Death Valley is the largest National Park in the US.
Death Valley Days was a popular TV series that ran from 1952 to 1970.  The 40th President of the United Snakes Ronald Reagan was a frequent actor and Boraxo salesman on the commercials of the show.
Scotty's Castle is a lavish mansion built in the remote northeast part of Death Valley named for legendary and colorful Death Valley Scotty who was a trick rider for Buffalo Bill Cody and set the record for the fastest coast to coast train ride to date. Scotty could tell such a good story his biggest fan was Albert Johnson. Johnson was a millionaire who Scotty had scammed but later forgave him and funded the construction of the Castle! Johnson didn't care about the money. He just wanted to hang out with Scotty.