Oregon, United States, North America
quillaja
Add photos See all photos
Due to the dramatically rising temperatures over the weekend and concerns of wet loose avalanche and poor snow conditions, we elected to scout the route (with binoculars), hike in, and camp on Saturday, and start climbing at 4am on Sunday 5/1/16. This proved to be a wise choice and made for an enjoyable day.
The hike in from Narada falls was shorter and easier than expected. As expected, the road was snow free, but not open yet. Walked the road from Narada to the curve where you cut off to Lane. Went by fast. Ran into some people we knew walking out around 1 or 2pm. They said they didn't climb because it was a post-holing slush fest, but those guys arrived at Narada at 9am and didn't get to the route until 12.
My partner and I set up camp, tried to scout the route a little, but couldn't get a great view in from below without going all the way up the debris fan. Woke up 3am, headed out of camp at 4am. Reached the bottom of the Zipper (up the ~1000ft debris fan) at 5am, then topped out of the Zipper (~1000ft) at 6am. Decided to go take a look at the 4th class summit block. Arrived bottom of summit block at 6:30, reached summit at 7am, and were headed down to camp at 7:30am. Got back to camp at 8am, packed, left camp at 9am. That was just in time to run into a club climb, which was composed of mostly people we knew. They had a successful climb because we saw them top out of the Zipper when we were started driving home.
Even in the morning, snow at base of debris fan was soft, but got better as we went up. Snow in Zipper was excellent. Could kick nice steps, bomber self belay piolets with the 2 tools. We both just soloed up. Angle is not "steep" actually. Was type 1 fun all the way. I was the perfect temp in my long sleeve t-shirt. Only "interesting" part was about 3/4 up, some large horizontal crack in the snow that was very deep, almost like a bergshrund-esque feature. Definitely over a person's head in depth. Really no opportunity for rock pro in the Zipper, plus moats on both sides.
Snow on the backside was getting slushy as the top had seen sun for a little bit. The summit scramble was kinda sketchy in mountaineering boots, but not difficult. From where the snow ended, it was probably a full 60m to the actual top. There were a few trees with rap stations, and we added another sling to the top one. We used my rope to rap exactly 30m down to the top of the snow where we left our ice axes. The rock section would be longer once the snow melts farther. It was nice to have the rope, as the downclimb would be doable but not fun.
The descent valley was still mostly in shade when we descended. Snow wasn't too bad. We saw lots of debris fields from recent wet loose avy all over the mountain. One place even had a couple refrigerator sized snow chunks from up on the rock slopes of Lane Pk. The best descent path through the "cliff out" part was skier's left. Might be steeper without snow.
Hike out was probably the hardest part of the climb, just cause of having heavy packs again (mine weighed in at 45lbs, with rope and rack). 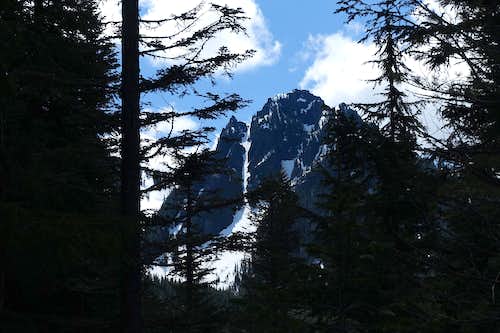 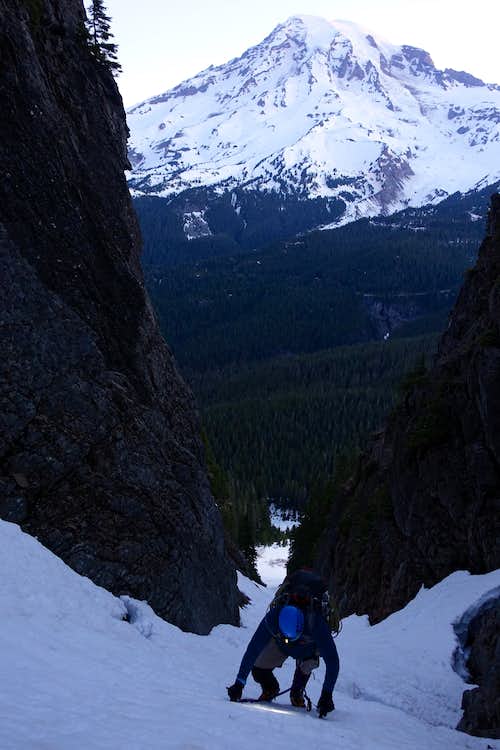 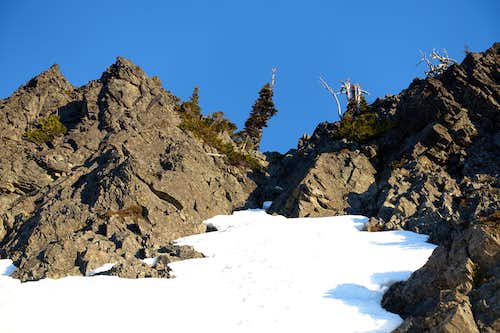 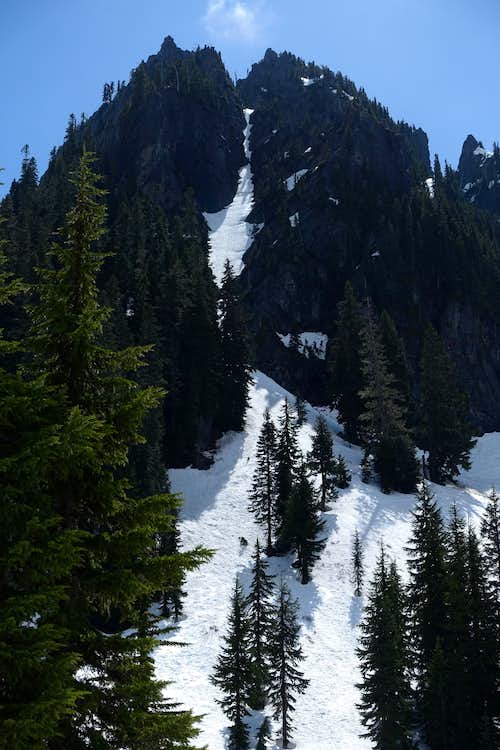