Everytime I smacked the tent, switching my slanted body from one fetal position side to the other, it seemed to snow inside and onto my head. Disoriented, fatigued, confused and frustrated at 12:30 a.m., I only mentally documented the odd occurrence and decided to completely seal myself up inside of the “Everest-Rated” Eddie Bauer salmon sleeping bag that was purchased by my father in 1980 so he could camp outside for the Lake Placid Winter Olympics.

A half hour later, around 1 a.m., I could feel urine beginning to swell against the bladder wall. I’ll wait it out. See what happens and get up to piss later if I need to. Craig Connolly advised keeping a piss bottle in the tent. It won’t be that cold, I remember thinking while driving from Northern Ohio to New York’s Adirondack region.  It was.

On the morning of Nov. 30, 2013 (unseasonably and oddly) record low temperatures for that date were recorded in some of the higher-latitude-lying areas surrounding Mt. Marcy.

When our minds were accepting dawn at 6 a.m., the temperature was negative nine in Lake Placid, we were later told, and had dropped to negative 19 around Saranac Lake. And up 3.5 miles on the VanHoevenberg Trail, we were unaware of the exact (lack of) degrees Mt. Marky* was throwing at us. But I knew at 1 a.m. I couldn’t go outside of the tent to piss. Our body heat and exhales frosted the inside of our enclosure, eventually causing a clean layer of sheet flakes, which fell everytime we moved, creating a thin ice layer over the top of our bags. An extremely cute mountain-dirty-blond that feared a big smile due to insecurities about the bottom row of her teeth would later say at the trailhead, “Ya we were out the last four nights but last night was the worst. The whole inside of out tent was covered in snow.” A bearded man and the blond had been hunting white tail deer in the wild. I can only imagine the frozen desire in those nights.

The cold wasn’t the only scare; we almost died of smoke inhalation. Since we ran into the tents at 5:30 p.m. shortly after sundown the night before, we had 12 hours to kill ‘till sunrise on summit day. So my cousin decided to smoke. But it didn’t move or dissipate. The grey n silver smoke streaks sank to the tent floor, like a comic or cartoon cloud. After a coughing fit and feeling like being on the top floor of a building with a basement fire, we sacrificed the warmth we’d accumulated for fresh dry air. 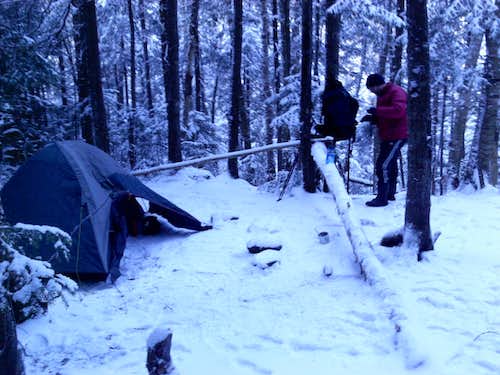 *(Side note: arriving in Lake Placid I thought it would be funny to tell the locals that my cousin and I planned on climbing “Mt. Marky,” just to gauge the level of “gaper” tolerance in the area. The result was 50/50. Ya see, old time mountain people had procreated and settled and cared for the land and lived off it harmoniously in the Adirondacks for centuries. But the Olympics brought activity, notoriety and worst of all, money to Lake Placid. So the residents found themselves, from 1932 on, split—those serving the tourist boom & industry influx [who slowly became bourgeois, in attitude if nothing else, themselves] and the rest of Lake Placid that would approach every human the same, devoid of class or car emblem.)

After much tom-foolery (and a 5-hour-piss-hold-release), we were on the Van Hoeven trail at 7:15 a.m. (I would not recommend pan-fishing water out of a river with your glove still attached to your wrist. Thank you back up pair. We also were on the last day you had to legally have a bear can, so we just bear-bagged it (not to be confused with bare-backin’ it), which required actually re-locating the hanging squirrel snacks in the morning, causing further delay.)

Now I understand, the locals reading this are saying, “Brah,why did you camp? You can do that 15-mile sic roundtrip summit bid in a day, easy, especially at the end of November, dude.” And I’m like, “Brah dude, you got like two feet of snow the week before, and I’m like from Oh-hi-hoe, so I thought it’d be snowshoes and crampons and a slow assent, my honkey.” And you respond, “Gaper, you see that bluebird sky, brah? We ain’t gettin’ ‘the dump.’ Either way, why did you hike in 3.5 miles with extremely ridiculously-heavy packs? Camp around Marcy Dam, brah!”

The first mile in the morning from basecamp (4.5 up Van H.) was a nice steady riverbed step by step rise. Normally at that time it would be a half-frozen slushy floor, but due to the drop it was nice and ice-laden.

“Well, I feel better about only having crampons now, since I’ve only seen micro tracks around,” I told my cousin.

“Everest is just around the bend,” he said sarcastically, hopping freely in his microspikes.

We kept trucking until the 5.4 mile mark, 2 miles from the summit (consistently rising but nothing technical), where you get that clear view of your ridgeline approach and summit cone. In February, we tackled the White Mountains of New Hampshire and old “Mt. Wishington,” but a little of Hunter’s “The Fear” began to creep in upon gazing at the peak. Humans had written little love notes in the snow as it was a common stopping-point-vista. Our quest for permanence. Carve your name in a tree, gravestone, book or family album… 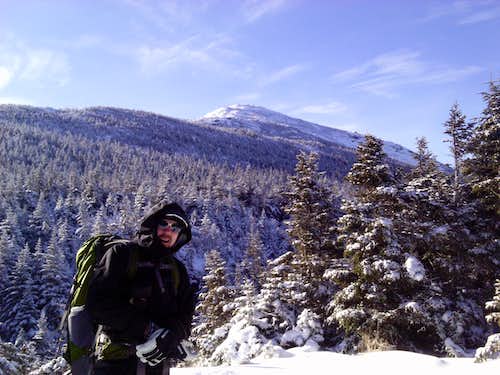 With a half-mile to go we butted up against the “shoulder”of Mt. Marky and the bare rock summit cone. Balaclavas, neoprene face masks and goggles. Summit forecast was around 5 degrees with windchill just in the negatives, and sunny. We stashed our packs to continue in the “light and fast” mountaineering mentality, and started to ascend. Now I really was glad I had my crampons on, and decided to go poles over mountaineering axe or technical tool. On “Mt.Wishington” in NH you need an axe, and they are better for self-arresting, but the grade on Mt. Marky wasn’t bad and four legs are better than three.

The wind was real on the summit and so was the above-the-clouds-and-trees-and-humanity view. Ten seconds for the iced-over summit-plague-pic and a couple of minutes of staring through the blue, and then we started heading down. The wind had blown over our footprints (yes, for the first time we were first up on a busy mountain, which when you cheat and start 3.5 miles in, that will happen), and I began instantly leading us off the side of the summit cone. I stopped at a severe overhang and instantly blamed my cousin.

“Where you taking us?” I yelled, in the lead.

He couldn’t hear me with the wind but pointed back and down. We changed course, and easily found our descent path with the help of several frosted over cairns and yellow trial blazes that would appear obvious to most.

Back down the ridge and to the viewing area again, 2 miles off the summit. The first team we’d seen all day was just passing us.

“Tons of naked ladies at the top,” I told them. They smiled and I’m pretty sure one of the four men increased his pace.

We returned to base camp at 12:30 p.m., satisfied. Our original plan was to camp a second night but after sleeping in the snow globe we decided to hike it out with our 70-pound packs. It was a grueling 12-mile successful summit day, and we were at the trailhead talking to the beard & the blond at 3:30 p.m. And at the Leaf Motel in Lake Placid at 5 p.m., sipping “Mountain Merlot” and chugging exaggerated tales of glory. 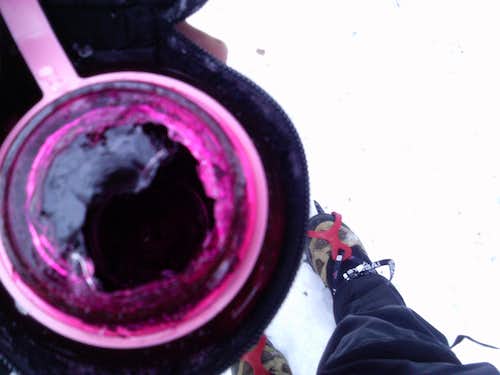 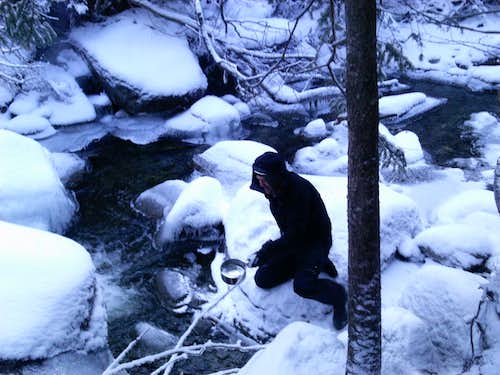 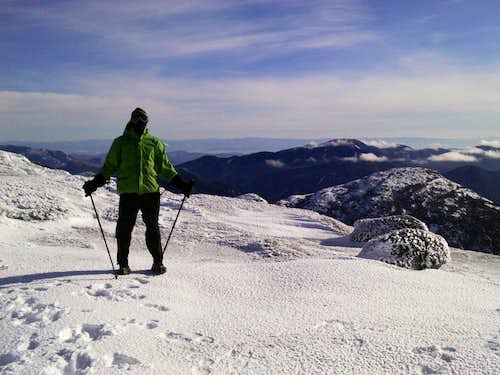 thanks brah, you were right! when you gettin' alaska?!