Free camping, free parking, but a lot of ground to cover up Mount Marcy

The trip to upstate New York

Hiking Mount Marcy is a long journey. It was a harder hike than Mount Washington in New Hampshire, because it is such a long hike, and you need a lot of endurance to get to the top. To park at the Adirondak Loj is $9 for non-members. To camp in the wilderness is tough in the summer because there are only so many available sites, and bears and mice may become a problem.

I arrived at Marcy in early July, during "black fly" season. Black flies swarm around in groups, but in all honesty, it was still the mosquitos or gnats, or whatever the hell it was biting me on the early part of the trail. We started our journey on Saturday, on the Appalachian trail, trying to find the right trail to the high point of New Jersey. When he headed down to the road to find an alternate route, we asked a guy in a beard if the summit could be reached by the road. He said no, and that we should go back up the AT. Well, the summit was less than 10 minutes from the road, so if I see him again, I am going to kick his ass...and then shave his stupid beard off too! Highpoint #25 was in the bag, but the challenge now was Marcy.

We drove up the Taconic Parkway, with views to the Catskills and the verdant New York countryside along the way. When we hit I-87 the mountains got bigger and more impressive, particularly after we passed Lake George.

In total, we drove up for about 4 hours or so until we reached Adironak Loj. We settled there for a little bit just to make sure of the directions we were going to take on Sunday morning, and to use the bathroom.

The plan was to park at the end of South Meadow road, and take the ~2.8 mile trail to Marcy Dam, which would then lead us to the summit. We spent the night at the South Meadow road and I spent some time talking with some hikers also camping out and drinking some beers. I also took a look at the trail we would take the next day, by walking down there for about 1/4 mile.

The next day we began the hike. The whole trail amounts to about 8 miles to the summit, instead of the 7.4 from the Loj. However, it is worth it. For one thing it is free to camp, with plenty of camping spots. In addition, the South Meadow trail is wide and flat and only gains 100' to Marcy Dam. It is pretty easy hiking and overall, it probably only adds 20 minutes to the main trail from the Loj. We made it in less than 50 minutes. (On the way back it took us 40 minutes.) From Marcy Dam, we saw our first decent views of the mountains. We had 5.1 miles to go to the summit, with over 3,150' to climb. 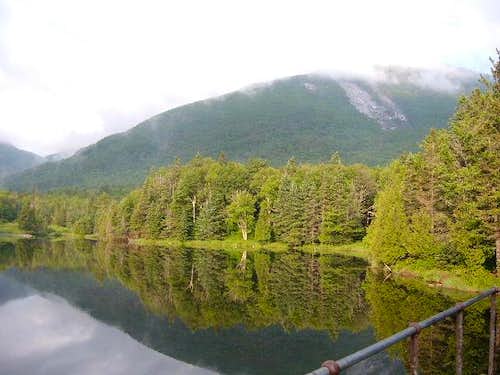 We treaded up a wet and rocky trail, gaining little elevation in the first mile and a half. The trail was more rock than trail, and was a gradual steepness that started to wear me out. For over two miles we prodded up steep hills, and meandered around wet rocks, until we saw a sign indicating 2.9 miles to go. I felt a little more energized realizing it had only taken only a little more than 2 hours to get this far, and we only had a little over an hour left. The hills started to level off. The area got more flat as we were apparently hiking a pass or ridge that went straight across to the start of the final climb. At about 9:00 we saw a sign that said 1.2 miles to the summit. The trees were thinning out, and we only had 900' to climb. Marcy was in view for the first time, but the final 300' were covered in fog. The trail climbed little in the next 1/2 mile. We were met by a young guy who worked for the park. He urged us to stay along the yellow markers due to the rare vegitation above tree line. He said that only 85 acres of the park was alpine, and the vegitation was rare, and they were hoping it would keep growing. Of course we complied on the way up. About .6 miles to go, there was a sign pointing to the summit. It was here that the real climbing started. We were probably about 4600' here, and happy for some alpine views. We treaded up wet rock, energized and pumped up with every step. Closer and closer, the summit was in reach, and our long hike up was almost done. The last part is steep and rocky, so it is tough to really churn up. When we reached the summit, it was covered in fog, but the fog eased up a little so we could see some of the surrounding areas.

On the way back, I took advantage of clearing fog, and took some more photos. The next two miles, after leaving the alpine area, SUCKED! It was steep and wet, and took nearly an hour and a half to get to the 2.9 miles to go sign. Of course, we now had about 5.1 miles to go to the car, and home. (We had a ten hour drive ahead of us to Washington DC.) My hiking partner and I basically walked alone. Sometimes he was way in front of me, sometimes I was way in front of him. Basically, it was not too safe, and we wanted to be careful to make sure we saw where we were going. He fell a couple times coming down from the summit, just below treeline, and cut his hand pretty bad. The bugs got worse as we descended, but they weren't really bad until the South Meadow trail, which we took after we finally reached Marcy Dam. It had taken us 2 hours and 40 minutes to climb down what it had taken us 2 hours and 25 minutes to climb up. We stampeded back to the car on the South Meadow trail, as the bugs got worse and worse. I put bug spray all over my arms, legs, face, and ears. No problem for them, they simply attacked my hair! The whole trip was over 7 hours, and pretty challenging, and long, and did I mention, it was LONG! This was highpoint #26. I have done 30 state highpoints now, since I began in August of 2001 at Harney Peak, South Dakota.

Hey there!
I would want to do this hike too! But i can't find any information on how it works for the camping, where it is exactly and other precisions like this... Can you help me on this one? Thank you so much

Re: Camping and hiking

We camped for free by the side of the road to Marcy Dam. Just follow directions on the route page. It is before you get to the Adirondak Lodge