A Two Day Hike up Mt. Marcy via South Meadows 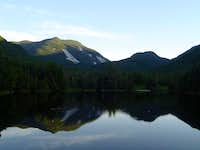 We had left Washington, DC two days before on my first trip to the Adirondacks. This was the third day of our trip, and the first day of our overnighter up Mt. Marcy, the highest point in the state of New York.

Following a drive through Lake Placid and a stroll down the main street, as the afternoon was rapidly disappearing we decided we better drive to the starting location for our hike. The plan was to begin the hike from South Meadows, where we would leave the car, and backpack 2.8 miles along an old fire road to Marcy Dam. At Marcy Dam we would camp, and then pick up the classic VanHoevenberg Trail to the peak the next morning. The advantage of starting at South Meadow as compared to the VanHoevenberg Trailhead at Adirondac Loj is that we could park the car for free.

The fire road to the dam was basically flat gaining only 100ft to the dam, making the back packing relatively easy. The mosquito’s, however, made the flat walk rather unpleasant. We took it slow and made it to the dam within 1.5 hours. By the time we settled on a camping spot and set up the three tents it was dark. After a snack, we played a game of "tie the food bag up in the tree." Each of us was given two try’s to throw a 5-50 cord, with a log attached to one of it’s ends, 20-feet up and through a fork in some tree branches. All our laughing, at missed attempts, got the dog camping across from us quite excited. On the eighth throw we finally succeeded.

This was our easy day, having covered less than three miles and only 100 vertical feet. 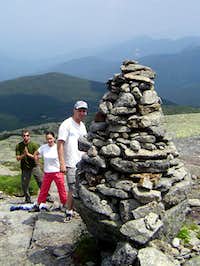 Carin near the peak of Mt. Marcy

Monday morning, 4 July 2005, we woke up early, and by 8 am were on route to the highest point in New York, via the VanHoevenberg trail. After about 1-mile the trail passed a turn off for Phelps Mountain, and another 1.5 miles further along it crossed Phelps Brook by means of the three-pole-bridge. About two miles into this second day of our hike we came to the beautiful site of Indian Falls, and since the last half mile had been quite rocky and steep we decided this was a great place to relax and take in the views. Rested, on we went up the trail that resembled a stone staircase. About a half mile from the peak the trail passed the Hopkins trail to Keene Valley, on the left, at a plateau elevation of 4,420 feet.

The last 900 feet of vertical climbing are quite steep, so we stopped on some big rocks for lunch and decided to leave our day packs there to be picked up on the descent. Near the peak we passed a large cairn, and on the peak we had some take a photograph of our group of four in front of the plaque commemorating the 100 year anniversary of the first recorded ascent in 1837. We also located the geological survey marker. It had taken us four hours, from the dam below, to cover the five miles up to the 5,344 foot peak. In those five miles we gained over 3200 vertical feet.

We were greeted on the peak by the so-called Summit Steward (some college kid who’s summer job it was to ensure no one walked on the roped-off fragile artic vegetation areas), and he informed us that we were the 16th, 17th, 18th, and 19th peak-baggers that day.

The descent to Marcy Dam required about as much time as the ascent, however we did take a much longer rest at Indian Falls where we dared a dip in the ice cold water only to be foiled by the clouds covering the sun as soon as we got in (oh the luck). While at the falls a guy and his girlfriend offered to filter some water for us. The unfortunate fellow had a big red circle on his shoulder indicating a tick was under his skin.

By the time we got back to camp we were rather tired and hungry and not looking forward to mosquito-thirty (the time of day the mosquito’s attack). Plus we realized we had another 2.8 miles of hiking to do with the added weight of our camping gear. So we ate and rested before we packed up the gear. On the bright-side, Parley had by now used up most of the 11 liters of water he had packed in; at 2.2 pounds per liter he had packed in 24 pounds of water!

Back on the fire road to South Meadows the mosquitoes were even worse then the day before. They made us forget how tired we were, as well as how heavy our packs were, and caused us to make it back to the car in less than one-hour.

It was a long day, having covered almost 13 miles, which went up over 3200 vertical feet and then came down the same amount. Tired or not, we all felt pleased having "bagged" the highest peak in New York!