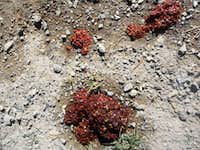 Window Mountain is, in my opinion, the most interesting of the scramble objectives near Crowsnest Pass. It truly possesses one of the more unique formations in the Canadian Rockies, an arch the size of which I have only seen via sandstone in the southern Utah desert. How an arch of this size, with the weight of limestone, can sustain the weight of itself is beyond me. The window created by the arch could fit a two story house and can be seen from at least one point along the range road and is quite vivid as you top out on the saddle of Mount Ward to the south. Allison Peak is the highest peak of this group and straddles the continental divide. It was named after a RMP officer. 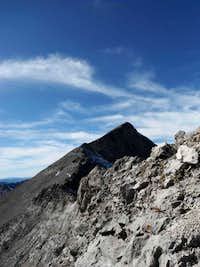 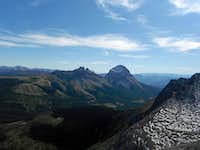 The best way to see this unique formation is to combine the trio of Mount Ward, Window Mountain and Allison Peak during a one day scramble fest. As scrambles in the Canadian Rockies go, the connecting ridges and relatively low elevation of this trio of peaks make this the easiest multi-summit day I have experienced to date in the Canadian Rockies.

Summit Mount Ward via easy terrain first, then scramble the ridge over to Allison Peak and finish by returning mid-ridge to scramble down and up the perpendicular Window Mountain ridge. Descend Window Mountain to the window itself and then descend back to tree line. This strategy makes for a true circumvention of the entire area skirting the continental divide repeating little if any ground. Allison Peak is considered a difficult objective in Kane’s guide book, but I found it on the soft side of difficult if even.

Despite all the peaks and sub peaks involved, I made this complete three peak ascent and descent in 4.5hrs from the Window Mountain Lake trailhead to my vehicle parked out on the Allison Creek Road (Range Road 52A-53A). I have read another party record 8hrs for this trip, so plan accordingly. I descended upon, within 10m, a goat and her kid at the pass between the highpoint on the Ward-Allison Ridge and the Window Mountain summit. On return to Range Road 52A-53A, I pushed a young black bear down a clear cut road (before he entered the thick regrowth) for about a km in late September during prime berry season.

From the second road on the left (west) past (north) Window Mountain and Mount Ward (read “getting there” for starting options from the Window Mountain main page), I hiked in along the road which had dips too large for the long bed truck I had with me. After passing through an open gate (2011), I veered left and then right slightly up hill onto more of a cut road than ranch road. When given an option to take a fainter cut road up and right versus sticking to the main cut trail which bent left, I took the right option heading for the treed ridge on the right. There are several items Kane has wrong in his description, one of which is identifying the large walled ridge in front of you at this point as not part of Mount Ward, when in fact it is. This right option cut road ends on the treed ridge to the right. From there I bush whacked up the ridge a short distance to regain the main cut road which shaved a km or so off my approach from this direction. Descend the cut road to the north of the treed ridge and north of Ward Mountain down to a marked (2011 with hiker signs) trail that leads left (west) and up to Window Mountain Lake.

There is a great camp site at Window Mountain Lake, complete with backcountry toilet. Circumvent the lake around the north and west shoreline. Ascend a well shaded (am) northern slope up to final tree line. Turn left and ascend mossy soft ground up several hundred meters to the scree col between the two peaks of Mount Ward. From here Window Mountain comes into full view at eye level to the southeast. Turn right and ascend Mount Ward’s southern peak to its summit and then descend the long ridge which continues to the south bypassing the unnamed peak that extends from Window Mountain on its northwest (right) side via a faint scree trail. Cross over the ridge back to the southeast after passing below the unnamed summit. Stay below the ridge line proper for faster and easier ground as you head for the summit of Allison Peak which had a summit register in 2011.

On return, tag the unnamed summit and then descend via several 5th class steps along the ridge from this summit to Window Mountain proper. It is at this col that I ran into a mountain goat and her kid. Continue up the easy flat ridge to the summit of Window Mountain. There was a summit register in 2011.

Descend Window Mountain’s ridge to the east until you are forced to down climb a short section of loose ledges on the north to gain a ramp. If covered in snow, this section is in fact the crux of the day. Once on the ramp, regain the ridge to the east until it hits an obvious scree ramp that doubles back left (west) to the base of the window itself. Enjoy the window and then descend large scree to the basin below. Turn right and descend much faster scree to a cut block road that will bend right before turning back left and out to the main range road. It is this cut block road where I encountered a medium sized black bear in late September. If returning to the Window Mountain Lake road, turn left at the base of the scree on a cut block road that ascends and then descends the treed ridge to the north back to the trailhead.

I exclusively took poles and boots for all these scrambles. Most would prefer to have a helmet on, particularly if in a larger group dropping rock on each other. There were no water opportunities after Window Mountain Lake.

Mont-Bell USA, the Lightest and Best Alpine Bags and Down Jackets in the Industry at a Reasonable Price