Alpine Goodness at the East Face of Chair

With the weekend approaching and the forecast showing clear and cold weather, I was drooling over the alpine possibilities available. It has been a long, iceless, and rainy winter in the Cascades. It would have been nice to try a bigger line like something on Stuart, Dragontail, Big Four, or Colonial, but neither Bruce or I had done a snow / alpine ice climb since last June. We decided to try the East Face of Chair Peak at Snoqualmie Pass. There is very little info out there on this route in winter conditions. I had heard from a friend that it was quite a bit harder than the Northeast Buttress or North Face. This sounded great, something challenging but easily doable in a day.

Bruce and I left the car around 7:00 in the frigid single digit temps and began the hike up the valley towards Source Lake. We reached this quickly and started up the headwall. In 2 hours from the car, we reached the basin below the East Face of Chair. The route looked good with a fair amount of ice on the lower portion, but the crux waterfall was not completely formed. 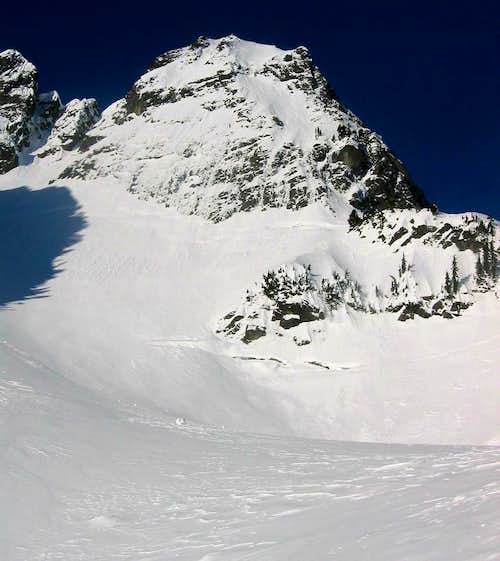 We roped up, put gear on, and began the climb up the steepening snow slope to the base of the face. It had become very windy and our faces where being pummeled by sprindrift occasionally. 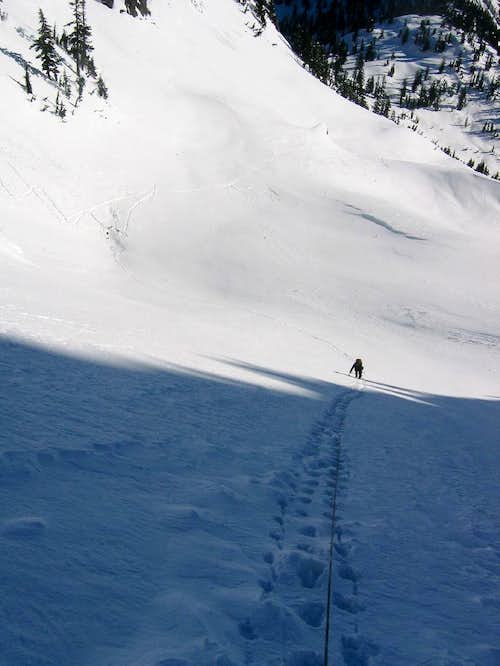 I reached the first mixed band and hunted around for a crack to set up an anchor. The rock quality on Chair Peak is fairly poor, and is quite compact yielding few good cracks. I finally found one just to the right of some really sketchy thin ice on slab. I traversed over but had no idea how I was going to hang on and excavate out the crack to get some good placements. Thankfully I found a edge on the rock to put my foot on. I brought Bruce up. Due to the thin ice over slab and the steep nature of the terrain here, this was a hanging belay.

I lead up the first pitch which started with a mixture of steep snow and alpine ice with challenging ice bulges. The angle was sustained around 65 degrees with 75 degree bulges. I placed a couple of screws, but only got about 2 inches of bite on them. The upper half of this pitch was a bit easier and consisted of 55 degree snow. I looked over to my right and noticed 2 climbers starting up the Northeast Buttress route. 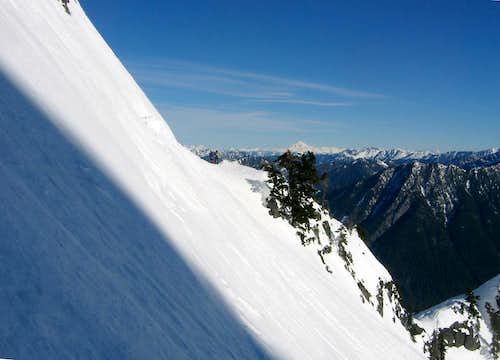 I started scouting around for an anchor knowing I didn't have much rope left. I couldn't find anything at first and was getting worried because I had no interest in simulclimbing this type of terrain with only a couple crappy screws between us. Fortuntely, after I pryed off a loose flake with my ice tool, I found a good micro crack. I stomped out a good stance then hammered in a knifeblade and a long thin bugaboo. I belayed Bruce up. 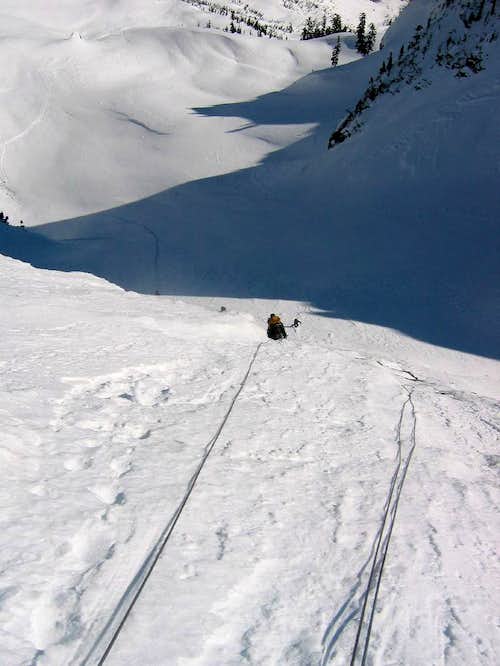 We looked up above us at the crux mixed band and things did not look good. The main waterfall was not formed and did not look climbable. There appeared to be some possibilites over to the right, so I lead up this way. I finally reached the mixed band after about 100 foot of 55 degree snow to discover that right below the band was this nasty section of thin sugar snow on smooth slab. This prevented me from getting up to climb the right waterfall. This section was very unnerving since I had zero protection in. I finally found a placement and started my traverse to the right. I placed another piece and tried to go up but it was more of the same thin snow on slab. I downclimbed to a rock outcropping and thankfully found a good anchor. I brought Bruce up and admired the fine view from my perch. 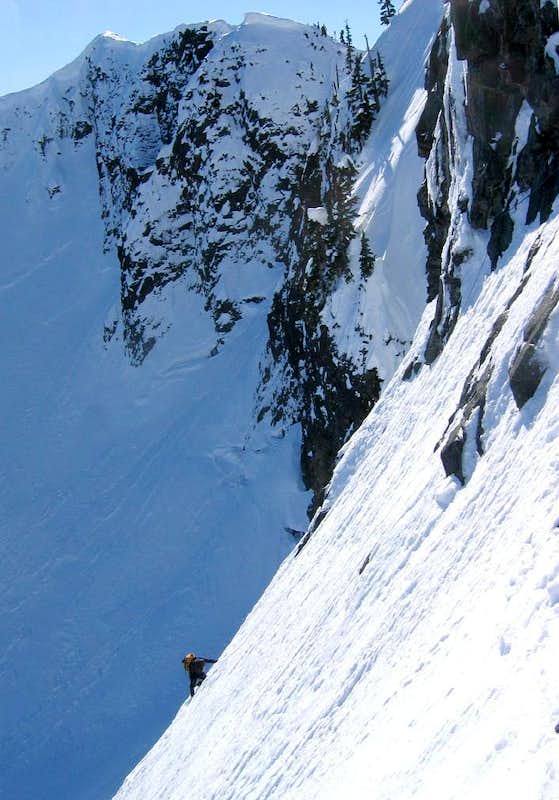 Bruce started the traverse over through the difficult thin section. 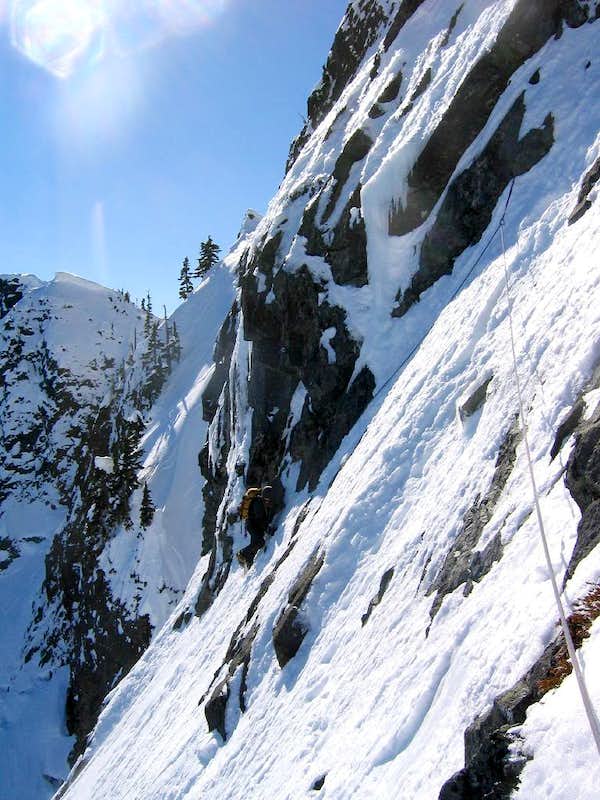 He was not too happy about having to downclimb the steep snow down to the anchor. Fortunately, the going is a bit easier there. I racked up and lead up and to the right going over a small waterfall with a good ice screw placement at the base. After that the route eases up to 40 degree snow so I stretched the rope to its end, then simulclimbed with me reaching the false summit just before Bruce reached the waterfall.

Bruce arrived to some cold and windy conditions. We chatted with another party then started the descent. The downclimb to the rap station went smoothly where we met up with the other party and tied our ropes together for a full 60 meter rap. I went first, then came Bruce... 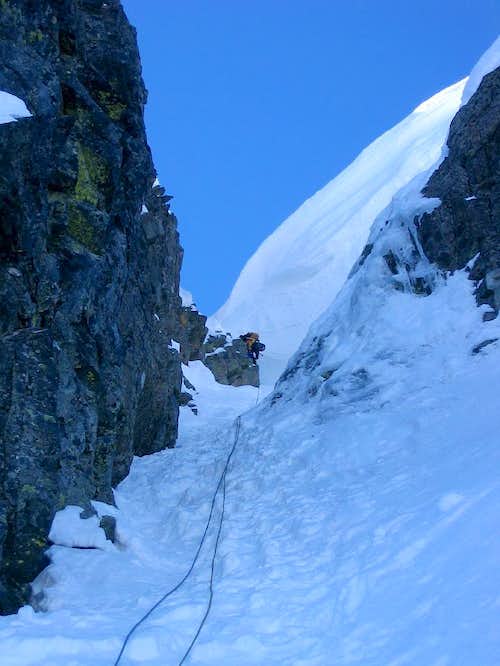 Bruce started down while waited for the other party. The descent after the rappel is fairly steep at first, about 40 degrees or so, but eases off after about 200 feet. 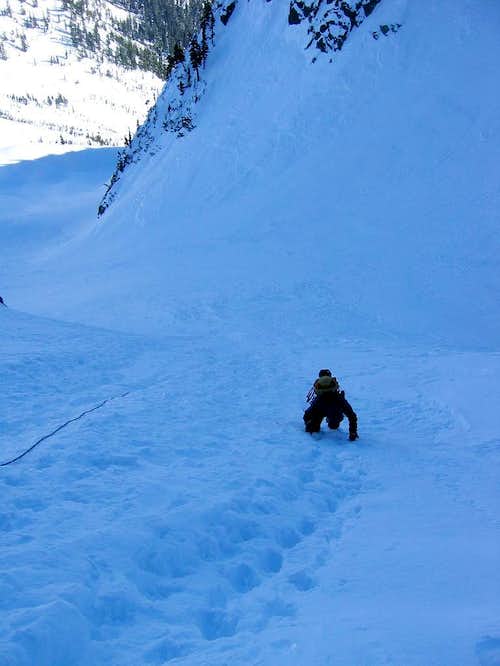 The hike out went quickly and was uneventful. What a great climb. It is so nice to have an area within an hour of my place to enjoy like this. It almost made me forget about the 2 straight months of rain we got, almost.

Thanks a lot for the nice words. A fun area to play around in so close to home.

If we ever seriously get into snow/ice, would love to do Chair (probably the easier route though :).

Thanks a lot! It's a fun place to climb in the winter with the short approach and steep terrain. Yeah, the NEB or NF have trees on them which definately eases the mind a bit when it comes to protection.

Looks like a fun trip, nice job Martin & Bruce! Clear but very cold weekend, we were in the Goat Rocks backcountry skiing and despite the sun the snow never softened, good conditions for you guys but must not be fun to follow the downhill traverse without pro...
Isn't east face of Chair an ok rock route in summer?

Thanks man. Yes, it is a rock route in the summer, rated II 5.6 I believe.

and good pics. Looks like a nice one, Martin.

Thanks a lot Brian.

Thanks a lot for the nice comments. Yeah, the rock on Chair is not exactly confidence inspiring, much better when frozen together. :-)

And as always, cool pics. Thanks!

Just saw this one, Martin. Great report and photos - way to get out there and take advantage of the clear skies (and sub-zero temps!). Nice job on the route - thanks for posting!

wonderful report martin! you really get a good feel of what it was like out there with the pics.

Nice report. Sounds like a fun climb! The photos helped tell the story.

Wish I had something like this one hour from where I live! Photos are great and really help tell the story.

Thanks a lot to everyone for their nice comments on my TR.

Thanks for the great read

Looks like it was a fun climb & a great day in the hills! Could you maybe scale down the photos the next time, though? They're great & a lot won't fit onto my screen at once, which is a bummer.

Looks like a beautiful day and an enjoyable climb. Wish it were snowing here in the southwest!