We visited Turkey and Bulgaria as part of a Colorado Mountain Club adventure travel trip. There were 8 of us: Steve, our leader, Sarah, Jon, Tom, Mike, Pat, Tara and myself. Tara had already climbed Musala, so she would be joining the rest of us for the Ararat climb only. We climbed Mount Ararat first, then flew up to Bulgaria to hike up Mount Musala. Ararat and Musala are both national highpoints. Ararat was the tougher peak, so we would spend 5 days on the mountain, going up and down. Musala would be a leisurely walk-up later on the same week.

I flew into Istanbul a few days early to see the sights: Hagia Sophia, the Blue Mosque, Topkapi Palace and the Basilica Cisterns. The Hagia Sofia and Blue Mosque are spectacular, as expected, but there was restoration going on in the Hagia Sofia, with scaffolding taking up about half of the nave.
I met up with the rest of the gang at the Istanbul airport for our flight to Van on August 16. Unfortunately, Steve and Mike's bags did not arrive in Van. (Tara and I also had luggage issues on this trip, but we were able to get them resolved before we got to Ararat). We met up with our guide, Tuna, and drove to Dogubeyazit to spend the night. We were hitting the mountain the next day, but the tour company had some extra equipment that Steve & Mike could use until their bags arrived. 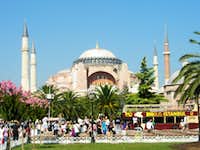 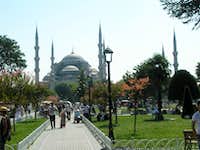 After a good night's sleep in Dogubeyazit, we drove up the dirt road to the drop-off point on August 17. We loaded all our heavy gear on the pack horses and hit the trail just before noon. 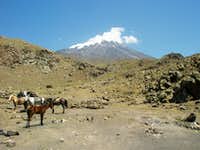 Mount Ararat from the drop-off point.
The trail, such as it is, was pretty chewed up by the horses, so everything got really dusty right away. In addition, it was a very hot day, and some of the group were still dealing with the effects of jet lag. We passed several herds of sheep and goats on the way up. 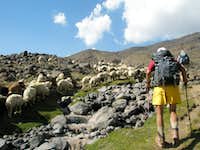 Sheep
It took over 4 hours to get to the first camp. Steve was taking it pretty slow, and he was considering sitting out summit day.
Monday, August 18 I didn't sleep all that well. The plan was to hike up to High Camp to acclimatize, then head back down to rest. Steve decided to stay at First Camp. Tom and Sarah hiked up a little way, then went back down. The rest of us climbed up to about 200 meters above high camp, then we headed back down to First Camp. It was partly cloudy and windy higher up, but not terribly cold. We ate dinner around 7PM and then went right to bed afterward.
Tuesday, August 19 Hike up to High Camp, then summit day on the 20th. There was some very light rain in the morning, and a somewhat pessimistic forecast for the summit: possible snow at higher elevations. It took about 3.5 hours to get to high camp. Everyone did well, but Steve decided to remain at high camp while the rest of us went for the summit. We could hear numerous noisy rockfalls in the canyon adjacent. It was windy and colder at High Camp. We ate an early dinner, then went to bed around 6:30. We would be up at midnight to get ready to go for the summit.

Back in August of 2012, I made an attempt on Mount Elbrus in Russia (also a CMC trip). On our first summit day, I came down with a sudden case of altitude sickness at around 16,000 and had to return to the Barrels. The weather was bad that day, so everyone went back down. The rest of the group went up the next day while I remained at camp. It was a disappointment, but such is the nature of mountain climbing. That failed ascent was on my mind as we were preparing to go for the summit.
We were up at midnight, then a quick breakfast, and we started up at 2AM. Steve was there to see us off. The pace was very slow (yavaş yavaş!), as it had been the previous days. There were other groups heading up, we could see their headlamps. The skies started out clear, and it was chilly and breezy, but not terrible. The wind began to pick up at around 15,000 feet, and clouds began to roll in as the sun came up. The wind really started moving by the time we reached the glacier. 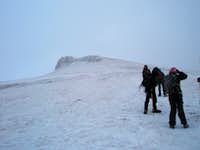 We hastily put on our crampons and continued. The wind actually died down as we neared the summit, but we were still in the clouds. After awhile we could hear people singing (always a good sign), and we could see a group of people on the summit. 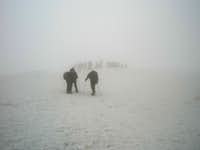 We shared the summit with a group of Armenians, but we didn't spend much time on top, for the wind rose to ferocious levels, with graupel. It took about 4.25 hours to reach the summit.
Apparently, we reached the summit just in time. As we were coming down, there was a flash of lightning, and the thunder was barely audible above the wind. We got a little spread out on the ice in near white out conditions, but we managed to regroup at the glacier's edge. The wind eventually died down, and the graupel turned to snow. We got back to high camp around 8AM. We met up with Steve and had some leftover breakfast stuff, then napped for a little bit before heading down to First Camp. We headed down on August 21st in hot and sunny conditions, and spent the night in Dogubeyazit. Steve and Mike were finally reunited with their lost luggage.

Van, then on to Bulgaria

We visited the Ishak Pasha Palace (built in the 17th & 18th centuries) east of Dogubeyazit on the August 21st, then we drove to Van on the 22nd. 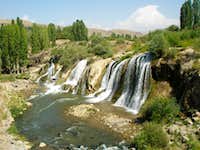 Muradiye Waterfall
We stopped at the Muradiye waterfall along the way, there was a wedding party visiting the falls. The bride didn't look all that excited. Then we took a ferry to Akdamar Island in Lake Van. We visited the Armenian Cathedral of the Holy Cross, built in the early 10th century. Pat wanted to go the high point of the island, but it was fenced off. 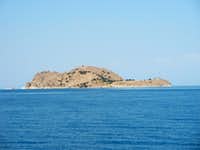 Akdamar Island
We bade Tara farewell, as she was flying back home. We spent the night in Van, then flew to Sofia via Istanbul on the 23rd. 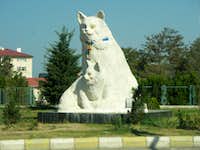 Turkish Van Cat Statue
We got into Sofia pretty late that evening, then drove up to our hotel in Borovets. We would hike up Musala on the 24th.

We left the hotel around 9:15AM to walk over to the Yastrebets Gondola and ride up to the Musala Pathway. We took a wrong turn, and wandered down the road a bit before backtracking. We asked for directions and eventually found our way to the gondola. The weather was starting to look a little iffy once we got to the top. There were dark clouds moving in, and then break up. 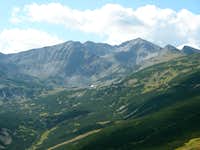 Irechek, Malka Musala, Musala
So, we followed the road to the Musala Hut, regrouped, and then continued on the rockier trail past some lakes to the upper "Everest" Hut. There were tons of hikers on the trail, it was a lot like climbing Bierstadt on a summer Saturday. The weather looked good. There is a cable route above the Everest Hut, so Pat, Sarah and I decided to go up that way, while the others stayed on the trail. 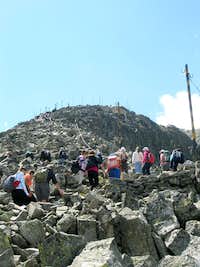 Musala Cable Route
Lots of people hanging out on the summit. We took some pictures, and I stamped my map in the summit hut. 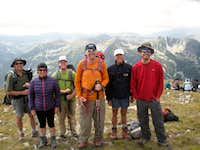 On Musala
Pat was thinking about going over to Malka Musala, but there were some dark clouds nearby, so we decided to play it safe and head back down. We stopped at the Everest Hut and got Cokes and beers, then walked back to the gondola. We headed back down to the hotel and watched The Gods Must be Crazy on Bulgarian TV.

We visited the Rila Monastery and Sofia over the next two days. The Rila Monastery church is magnificent, with icons and frescoes that must be seen to be believed. We checked out the Alexander Nevsky Cathedral and the Museum of Socialist Art in Sofia. Pat was thinking about climbing Vitosha, but the logistics of getting there were a little messy, so he joined us instead.
Sara, Jon, Mike and I headed back home on August 27, while Steve, Pat and Tom went on to Greece to climb Mt Olympus.
It was a great trip. Thanks to Middle Earth Travel in Turkey, and Odysseia-in in Bulgaria. Most importantly, thanks to Steve, Sarah, Jon, Tom, Mike, Tara and Pat. See you on the trail. 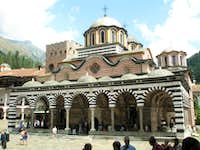 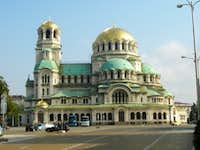 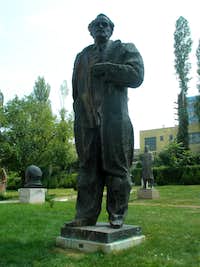