Baou des Vespres is one among the numerous limestone rock structures belonging to the wide massif named Montagne Sainte Victoire, Southern France. It is a symbol of the Provence region, like the Sainte-Baume and Mount Ventoux, the major landmark of the Aix-en-Provence region. Montagne Sainte-Victoire appears as a huge rocky bastion 18 kilometer long with a 7 kilometer long summit plateau. This charmer massif, rising from the Mediterranean plains with its immaculate rocks, exerts an extraordinary appeal even if observed from a distance. The highest point is the Pic des Mouches at 1011 m, while the well known summit called Croix de Provence (945 m), with its 19 metres high cross, although not placed at the highest point of the mountain, stands out from the ridge far more than the Pic des Mouches. It's a popular hiking destination, like several other places in the massif, which can be explored along its countless paths, also to look at the fascinating sites of religious heritage, as the Saint-Ser Hermitage, a tiny chapel surrounded by wonderful scenery, or the Sainte-Victoire Priory. 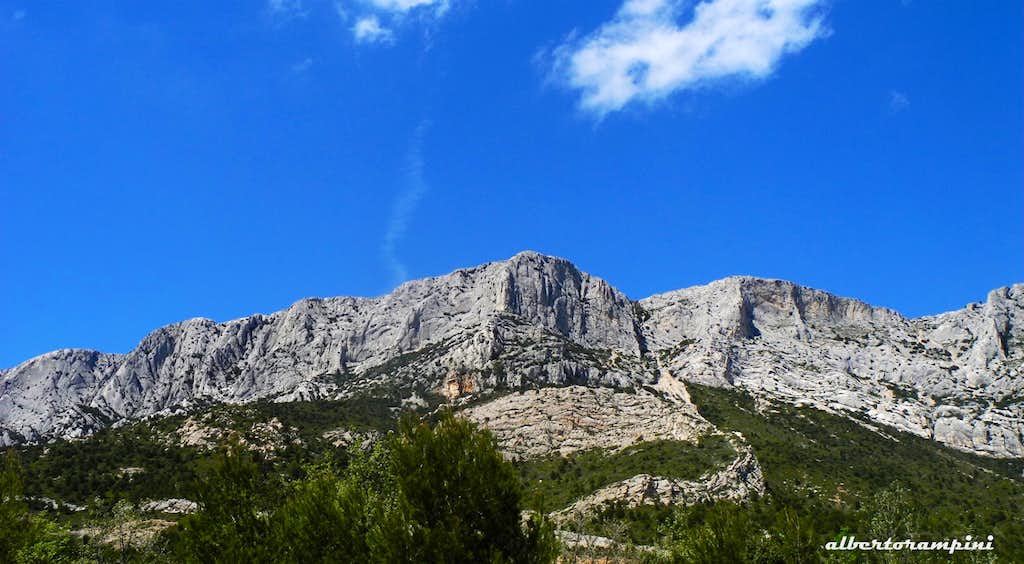 A perfect area for walking, but even more to climb. The rock climbing destination at Sainte Victoire is the South face, which counts around 1000 routes, 29 or more sectors and 7 separate parking lots, an astounding space to climb up a surprisingly sticky limestone. There are a lot of single pitch routes, but also high walls, plenty of long and adventurous climbing routes.

Baou des Vespres is one of these latter. It's situated more or less in the central part of the long rocky bastion that forms the southern side of the Montagne Sainte Victoire. With its stunning South-East wall, the Baou des Vespres constitutes one of the major walls of the Sainte Victoire massif. Although relatively short (140 meters), its routes are stiff and still nowadays remain parsimoniously equipped. 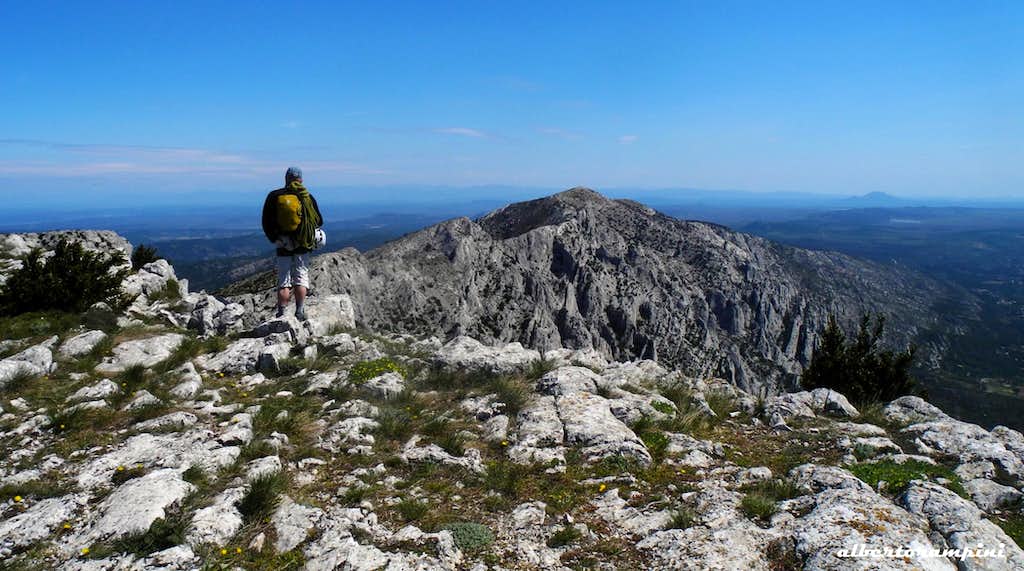 By plane - Sainte Victoire massif is situated 35 km from Marseille and 180 km from Nice, so the best option is to fly to Marseille or Nice and rent a car.

By car - The nearest town is Aix-en-Provence. The A8 autoroute runs south of Sainte Victoire and Aix-en-Provence. If coming from the Nice direction, exit the A8 onto the RN 7 in the direction of Aix. From Aix, take the "Route de Cézanne", road D17, which traverses under the south side of the massif from Les Tholonet to Puyloubier. There are several parking lots along this road, the right one to climb on Baou des Vespres is located on the left (direction Puyloubiere), about 500 metres after the Domaine de Subéroque.

A historic route, one of the first ones to be opened at Sainte-Victoire. Beautiful classic climb, pleasant and not too sustained. Remarkable the fourth pitch airy traverse. 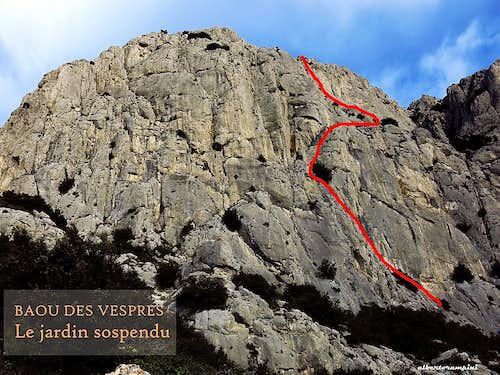 The approach to Baou des Vespres, located in the vicinity of Refuge Baudino, coincides in the first part with the access to the shelter itself. From the parking lot take a good and broad path marked in red to the Refuge Baudino, starting on the left of the parking lot. It crosses a forest road, then it continues over the road (signpost Ref. Baudino) heading at first to the right and then going back to the left (red signs) up a small valley towards the hill located behind a characteristic rocky promontory. Continue to reach the small shelter, hidden amongst the rock and the wood. Behind the shelter, take to the right the path marked with brown lines. It leads through a chaos of blocks at the foot of the face. Leave this path to reach the start of the route, common with "La Cheminée en Arc en Ciel".

L4 - Downclimb a bit, then start the air and exposed traverse about 15 meters long (pegs), reach a tree and climb 5 meters directly to belay on two solid shrubs on a confortable ledge, 5b, 25 m
L5 - Take a crack a little to the left, belay on two pegs inside the crack, 5a, 40 m
L6 - Climb the dihedral-crack on the left, then up small walls and steps to reach the summit plateau, belay to be equipped, 5b, 25 m

A great classic in the 5c/6a level, the Diédre de l'Eglantine is one of the frequently attended route of the Baou Des Vespres together withe the Jardin sospendu. Although the wall is not very high, it is one of the most impressive of the Sainte Victoire. The route is partially equipped with pegs. Take a game of excentrics and friends until size 3.

Other routes on Baou des Vespres

No fees, no permits required. There is a strict prohibition to hiking and climbing during the summer, because of the fire hazard due to the high heat and sunshine, usually between June 15 and September 15. Check in every year the exact period before embarking on a vacation, since it may undergo changes. Wild camping is prohibited.

Montagne Saint Victoire has been recognised as a Grand Site de France since 2004 and is a French jewel of natural heritage which must be preserved. Covering 35,000 hectares near Aix-en-Provence and Marseille, the Concors and Sainte-Victoire massifs form the largest single wooded area in the department of Bouches du Rhône. Climate is typically Mediterranean, characterized by a great dryness with high sunshine. The area is sometimes subject to the strong wind from the northwest, the "mistral".

In addition to being prohibited, climbing in summer is not advisable in reason of the excessive heat. You can climb also during the winter, but sometimes the weather can be cold and windy. In particular the wall of the Baou des Vespres is exposed to the east, although quite sheltered from the "Mistral", but soon enters in the shade and is not recommended for winter. Definitely the best periods on Baou des Vespres are spring and autumn months.

There are different places to stay close to Montagne Sainte Victoire. We can find equipped campsites in Puyloubier, Beaurecueuil,Rousset and Peynier: