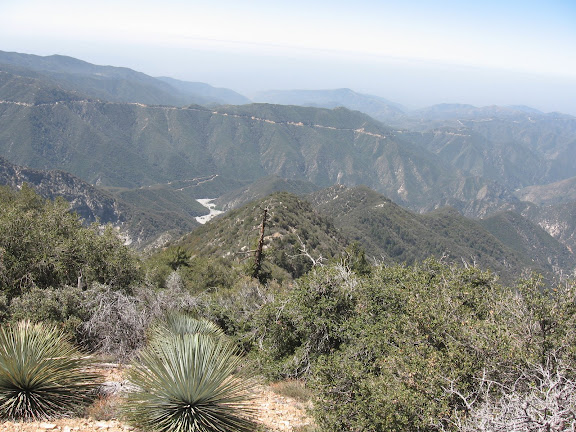 Mt. Baldy via the Bighorn Ridge at EveryTrail

Although most parties ascending Old Baldy started from San Antonio Canyon and used either the Bear Flat or Devil's Backbone route, there were also other ways to climb the mountain. Some hikers took the northeast approach from Glenn Ranch, following the old miners' road up Lytle Creek to Baldy Notch, then up the Devil's Backbone to the top. From San Gabriel Canyon, Henry Roberts led parties up the peak via the East Fork and Prairie Fork as early as 1889. In the early years of the present century, a rough trail was built up the long southwest ridge of Baldy from Weber's Camp in Coldwater Canyon. With the demise of Weber's Camp in the late 1920s, the trail fell into disuse and disappeared.

The long southwest ridge is the Big Horn Ridge (BHR), and from what we've read there hasn't been any reports of anyone climbing this path other than the fact about 100 years ago there used to be a path. The idea of trying to ascend Mt Baldy this way was brought up in this forum thread. In it some potential routes were considered, but in the end no one had checked it out.

After the build-up, the lack of resolution bothered me. So I looked over the info and added some of my own analysis, and then we decided to go check it out. There was lots of brush just getting up to the ridge, and we realized the energy expenditure to ascend Baldy would be much more than the already imposing stats (> 7000' in elevation gain) implied.

However we knew it was possible, and so after waiting for the snow to melt, we were ready to go. We originally planned on doing it the previous weekend when it was nice and cool, but the suggestion of rain/snow prevented us. Instead, we had to wait until this weekend which was at the end of a heat wave.

We met at the Baldy Village Visitor's Center, and car shuttled down to Cow Canyon saddle. We left down the boring truck trail at 5:20 am, taking us down to Cattle Canyon in ~ 5 miles, and to our initial spot for ridge ascent in 7.5 miles. So at about 8am, we started our ascent. The ascent up to Bighorn ridge requires about 1500 ft gain in 0.7 miles, all of which is covered in brush. We did a decent job of pathfinding last time - though it took a while - so this time while we still had to deal with a lot of brush, we were able to remember spots from before which to take and avoid. And bring gardening gloves! 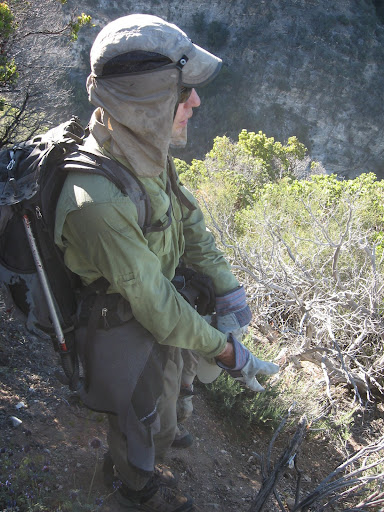 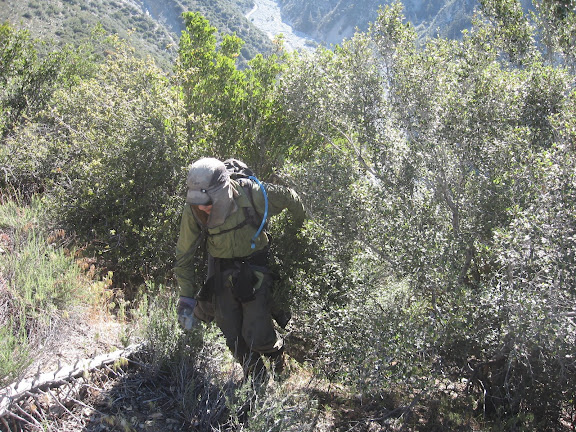 For instance, on the portion of the ascent to BHR that heads northeast, most of the top of the ridge is covered in brush that reallys slows you down. However, if you stay on the west side a little below the ridgetop, the brush is considerably less and fast-going. Still, you must find a good spot to climb back up before the ridge turns back northwest.

We were reasonably fast this time, getting up the 1500' to the BHR in 1.5 hrs. From here, the next goal is to reach the 6388' bump (6380 waypoint) which is the junction of a large ridge north of Fossil Canyon to the west. The 'best choice' path is still not clear, but it is certainly some combination of staying directly on top of the ridge, but veering off to the west side for some parts. (Key note: For practically the entire BHR, you do NOT want to try to drop down on the eastern side. Way too steep). At waypoint BHR1 (point we got on ridge), there is certainly some resemblance of an old trail on the west side of the ridge. You can follow this for a while, just below the ridge top. However, after a short distance you'll want to climb back up to the ridgetop, as you'll run into some rocks / cliffbands. 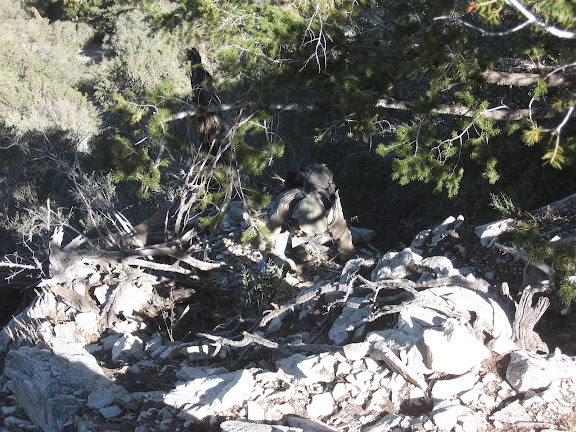 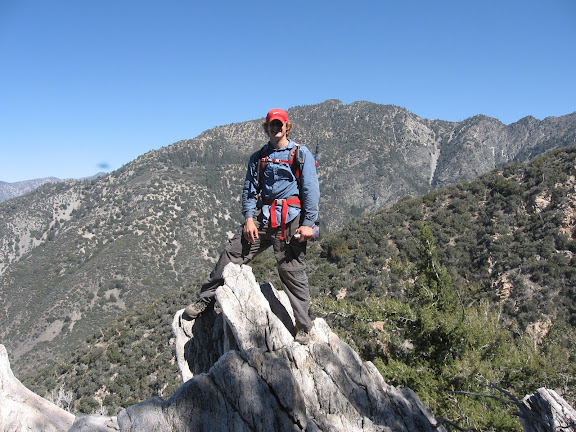 In this case we probably stayed on the west side too long, and ended up doing some class 3 climbing back up (note if you stay on the ridge the whole time in this section, there will also be some class 3). We stayed on the ridge for a bit, but at times where the brush was simply not negotiable, we would look and drop down the west side again for a little bit, only to reascend to the ridge. Basically, you have to choose the path of least resistance, which may be the one that includes more energy expenditure on steep slopes!

The best example (worst part) might be right before bump 6388'. We were on the ridge with considerable brush ahead of us. Even a short drop to the west side did not look any better. I tried to find a path, crawling by manzanita, but just ran into a whole bunch of brush (buckthorn perhaps...it was dead, light colored branches with pointy ends everywhere, but I didn't take a picture). I tried climbing over part of it, but then there was just nowhere to go. There was lots of cursing in this part!

Eventually, we went back a bit, descended the west side a bit more than normal, and found some nice exposed area that we could quickly climb to the 6388' bump. This bump actually provides some nice shaded area, ideal for camping, haha! 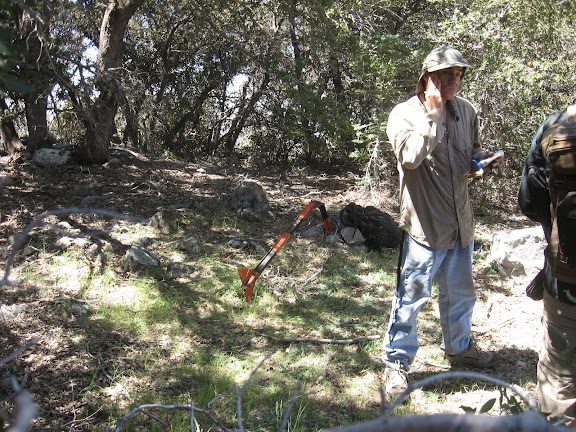 Between 6388' and 7245', the brush was a little better, but still we had to climb down the side of the ridge multiple times and climb back up to bypass some harsh sections. But from this part up it was a really nice ridge as the mixture of pine trees and rocky portions gave it a real scenic value. From 7245', I expected from previous scouting with binoculars that the ridge would not be too bad in terms of brush, and that was the case. After a bit of a flat section, we followed the ridge which included some rock scrambling and mainly avoiding manzanita patches up to about the 7600' countour. 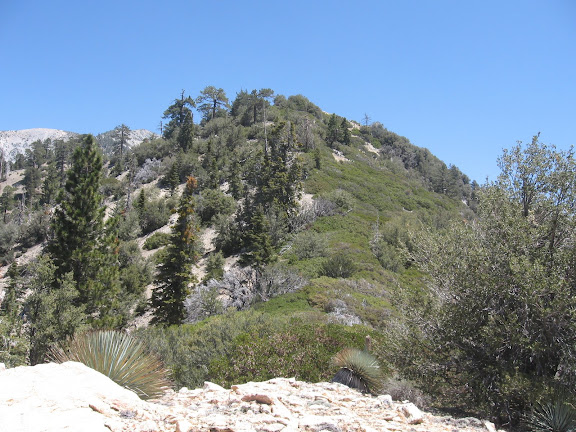 At this point, the group was certainly wearing out, as a lot of energy was used to deal with the brush and rocks and instability of the terrain, and yet we still had 2500' of gain to go! But it was time to make a final, consistent push. We went up perhaps 1600' in 0.8 miles up to the final point of the ridge, bump 9425'. This portion was nice, mostly brush free with some rocky portions to negotiate, nice trees and some deer hanging around. But it was steep! Along this ascent one could see unique views of the steep dropoff into Cattle Canyon as well as the San Antonio Ridge. 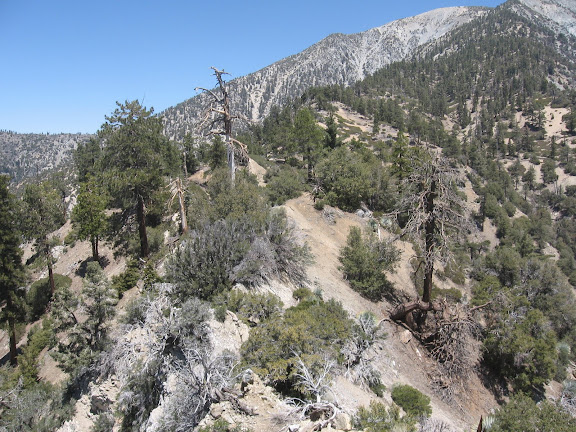 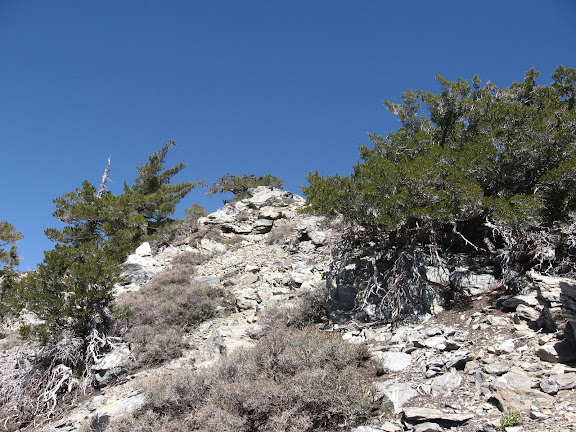 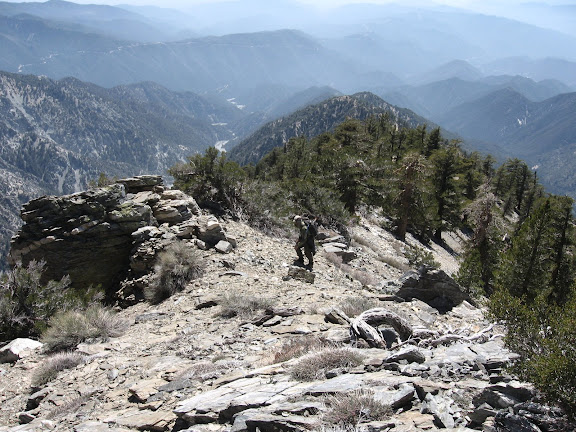 And with that bump, we made had finished ascending Bighorn Ridge. We continued up to summit Baldy. From there, we took the Bear Canyon trail down. 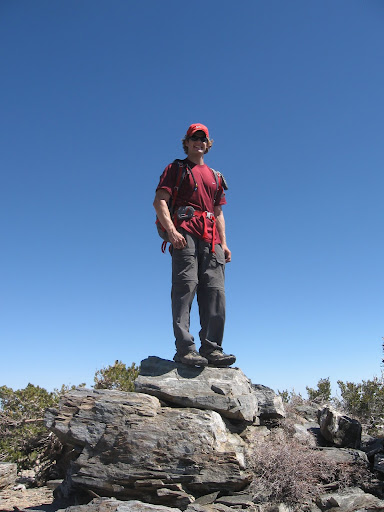 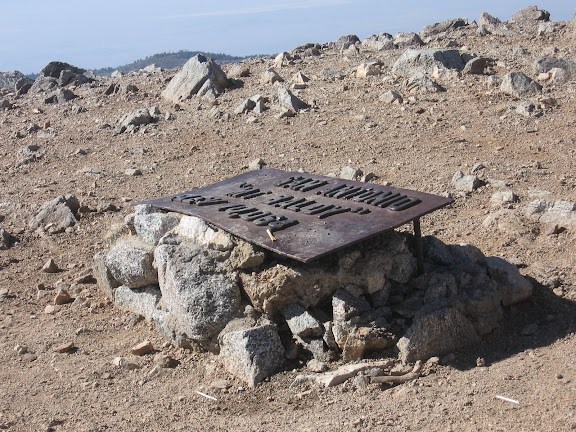 We had 5 people summit, congrats to them! For myself, this was certainly the toughest hike I've done in the San Gabriels easily beating Iron Mtn, though I don't know how it fares to some of the other large off trail climbs, but the combination of brush, rock bouldering, steep terrain, & pure elevation gain make it a very worthy climb! 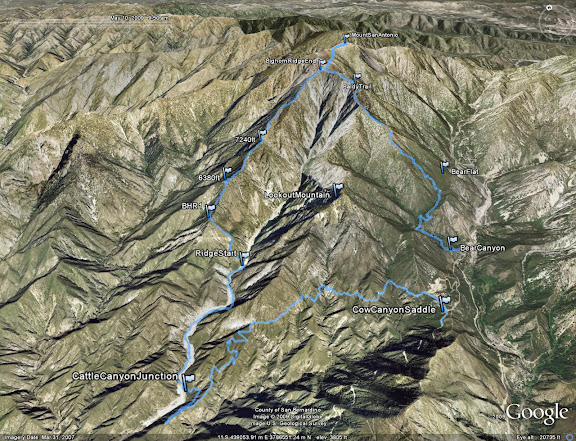 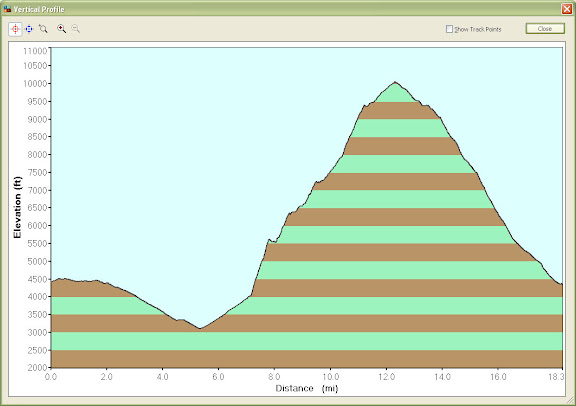 Good for you for taking the initiative after several people (including myself) had just talked about doing the route. I'll add this to my List of Toughest San Gabriel Mountain day hikes.

it was worth the effort. hard to know how to rank it since i've yet to do some of those top ones on the list. definitely tougher than Iron via south ridge though.

on a cool day, let's go for Triplet Rocks.

If it's tougher than Iron south ridge it belongs on the list. Yes, definitely need a cool day for Triplet.

Like Augie said, we've all talked about it but you finally did it. Definitely have to graduate you out of brush and onto endless moraines.

thanks...I have never heard of the term 'moraine' but I'm sure it's equally exciting as manzanita