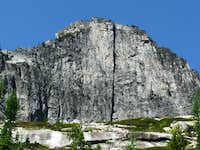 Even though the peaks in the following list have summits with lower elevations than some, that does not mean they should be considered to be inferior or taken lightly. This directory contains more than a few peaks which are more technical, remote, and difficult to climb than some of the better known and so called “important” prominences of the Bitterroot Mountains.

The couloir to
the summit of
Totem Peak.
Tim Sharp Photo.

While building the following list I tried to include only those summits (peaks) which, if close to another prominence, are at least 300’ above the saddle which connect the two.

A substantial amount of time has been spent poring over Topo maps (both paper and computer) during the compilation of this list; however that doesn't mean the list is perfect. If you find errors or omissions, please let me know so I can make corrections.

There are a lot of unnamed peaks in the Bitterroot Mountains, many of them on this list. Some of those "unnamed" peaks, along with the names some have "unofficially" applied to a few of them, appear below. Each of the unnamed peaks is listed either as: Unofficial Name (point nnnn) or Short Description of Location (point nnnn).

The Latitude and Longitude are also listed for each summit to help anyone unfamiliar with the area discover its location.

You will notice that most of these summits have not yet been posted (climbed) by even one Summitpost member. Hopefully that will soon change.