Buck Point is in the northwestern of the Elkhead Mountains. The mountain is a curious butte like-mountain with steep cliffs around its southwest, south and southeast sides. We were the first persons to sign the summit register since six years previous, so apparently the mountain is not climbed often (by Colorado standards at least). Buck Point is probably the least climbed of the ten highest peaks in the Elkhead Mountains. Although beautiful Buck Point is not as spectacular as say Capitol Peak or the Maroon Bells, if you enjoy solitude the peaks in the Elkhead Mountains are a welcome change from some of the other ranges in Colorado such as the 14’ers, Indian Peaks, and Gore Range, all of which tend to have large crowds on summer weekends. Several aspects of the Elkhead Mountains make this a rather unique mountain range in Colorado. It is certainly possible that the Elkhead Mountains are the least known of the major mountain ranges in Colorado. This is partially because the range is a long way from any metropolitan area, and partially because the Elkhead Mountains are fairly low by Colorado standards, as there are no peaks reaching 11,000 feet. There are also few lakes, so the range isn’t visited by fishermen. Despite their low altitude, the Elkhead Mountains receive much snow, and snow lasts into July on the higher peaks. Most of the peaks in the Elkhead Mountains see very few ascents, but Hahns Peak, the eastern-most peak in the range is a popular climb for residents of Steamboat Springs. The Bears Ears see quite a few ascents by Elkhead standards, because of their prominent shape and visibility from the Yampa River Valley. Black Mountain is also climbed fairly often because it is the highest point in Moffat County, and the popularity is on the increase with more county highpointing interest. Sand Mountain must be a fairly popular (by Elkhead standards) climb as well, as there is a trail to the top, and as it is the first and only mountain in the range where I have ever met anyone. This was on Labor Day weekend, 2005, when we saw 3 other hikers. Most of the rest of the peaks see few ascents, and one ranger has told me some of the peaks only have a few names in the registers since 1980. So, there are few hikers around, but hunting is another story. The Elkhead Mountains are very popular for hunting in the fall and contain large populations of deer, elk, bear, etc. One thing unique about the range is that hiker use is overall actually decreasing, rather than increasing as it is in most places in Colorado. The summit registers (which the Forest Service keeps record of) on most peaks indicate that they have had more ascents in the 1960’s and 1970’s than they do now. Even before that, there were many summit logs from the 1930’s and 1940’s from sheepherders. The Elkhead Mountains are made of old volcanic rocks 17-25 million years old. One thing unusual is that the Elkhead Mountains run west to east as opposed to north and south as most of the ranges run in North America. It is impossible to describe the general forms of the peaks because they are all so different, but most of the peaks are isolated rises from a huge plateau which forms the bulk of the Elkheads. Elkhead Mountains-10,000+ Foot Peaks with 300+ feet of Prominence 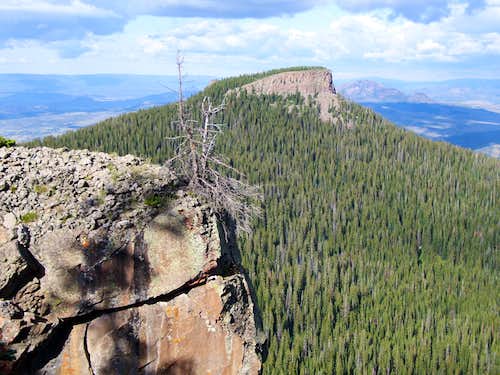 Photo shot from the top of the cliffs on the false summit of Mount Oliphant looking towards Buck Point.

Willow Creek Trailhead Drive Highway 13 either north of Craig or south of Baggs to between Mile Markers 115 and 116 (this is about 25.5 miles north of Craig). Turn east on County Road 38 and follow it to Forest Road 109. The Forest Service boundary is about 9.7 miles from Highway 13 (after this point I took a wrong turn, so don’t have odometer readings). Stay on FR 109, ignoring all the named roads that branch from it. Before the Forest Service boundary, make sure to stay right at an unmarked junction. If you start heading away from the mountains, you are on the wrong road. After the Forest Service boundary, stay left at two junctions, while staying on FR 109. The second left is labeled “Willow Creek/Trail 1144”. Follow the road to a locked gate. The trail begins here on the east side of the road/parking lot. 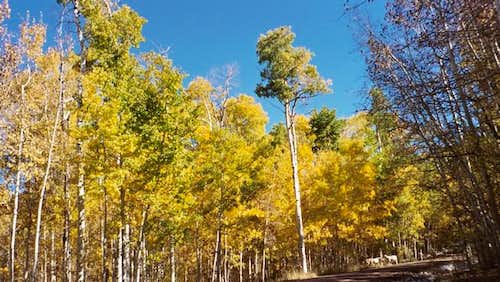 West Prong Trailhead From the junction of Highway 40 and 13 in Craig, turn north on Highway 13. Drive north for about 13 miles to north of mile marker 102 until you see a sign posted for County Road 27. The road is posted for “Forest Service Access” and “Black Mountain”. Drive County Road 27 through private lands for 10 miles which is where you reach the Routt National Forest boundary. The road becomes FR 110. From the Forest Boundary, follow FR 110 to the junction of FR 133 which branches left from FR 110. Follow FR 133 to near its end and the Trail 1144 trailhead. 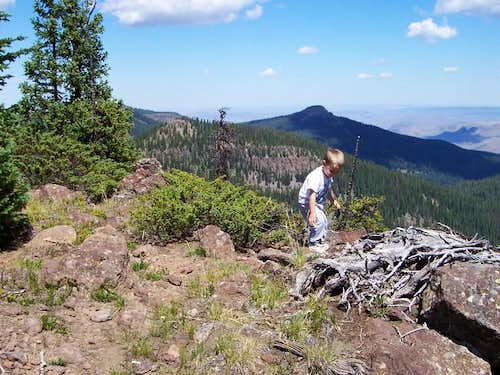 Photo taken from the east summit of Black Mountain, looking north, where the trail reaches the rim. Buck Point is right of center. The West Prong Trailhead is on the far right side of the photo.

The only route I have completed is the Willow Creek Route, but there are certainly other routes available. 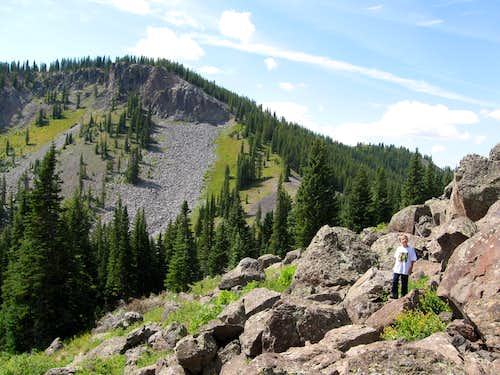 Minor boulderfields on the Willow Creek Route of Buck Point. The false summit of Mount Oliphant is in the background.

Approaching Buck Point from the east and the Bears Ears Trail/West Prong is certainly possible, and might even be a little shorter walk, but the drive is longer. It would be a good route to try if you are climbing Black Mountain or Bears Ears on the same trip. There appear to be other routes on the mountain as well, but be prepared to find your own way through thick timber or steep talus. There are some vertical cliffs on Buck Point, but most of the rock in the Elkhead Mountains is very crumbly and the cliffs of Buck Point are probably no exception. Although aesthetic, it is unlikely that the cliffs of Buck Point would provide solid rock climbing.

There is no red tape, but tread lightly. 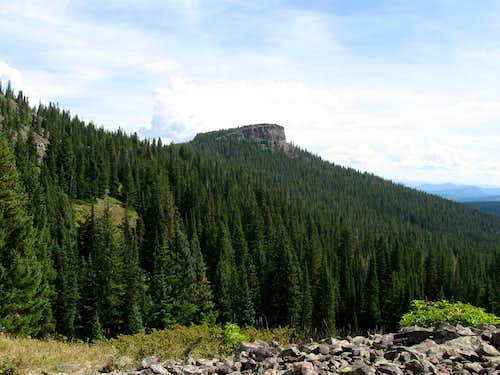 There is no red tape. This is Buck Point from the Welba-Oliphant saddle. 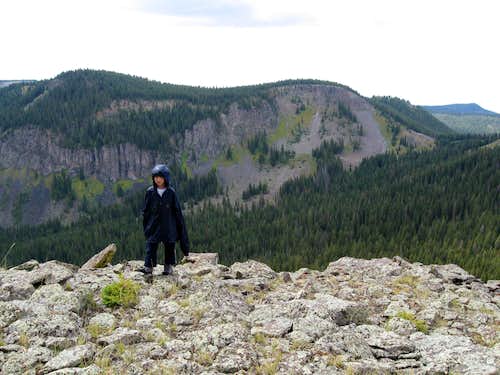 Just below the summit of Buck Point just after a hail storm on September 7 2009. Mount Oliphant stands in the background.

CLICK HERE FOR THE BUCK POINT WEATHER FORECAST Below is the National Weather Service Climate Summary of Dixon/Baggs, on the Wyoming/Colorado border. The data is from 1922-2005. This is the closest long term weather station, but be aware that higher elevations will be much wetter and colder. Dixon/Baggs is at 6370 feet elevation, so expect the temperatures on Mount Welba to be 10-20 degrees colder than in Dixon, except on winter nights.