Perhaps Black Mountain could be affectionately called the hill in my front yard because I can see it looking out my front window. Black Mountain is in the Elkhead Mountains in Northwest Colorado, not far south of the Wyoming border, and rises about 4600 feet above the Yampa River Valley. Several aspects of the Elkheads make this a rather unique mountain range in Colorado. It is certainly possible that the Elkhead Mountains are the least known of the major mountain ranges in Colorado. This is partially because the range is a long way from any metropolitan area, and partially because the Elkheads are fairly low by Colorado standards, as there are no peaks reaching 11,000 feet. There are also few lakes, so the range isn’t visited by fisherman. Despite their low altitude, the Elkheads receive much snow, and snow last into July on the higher peaks. Most of the peaks in the Elkheads see very few ascents, but Hahns Peak, the eastern-most peak in the range is a popular climb for residents of Steamboat Springs. The Bears Ears see quite a few ascents by Elkhead standards, because of their prominent shape and visibility from the Yampa River Valley. Black Mountain is also climbed fairly often because it is the highest point in Moffat County, and the popularity is on the increase with more county highpointing interest. The rest of the peaks see few ascents, and one ranger has told me some of the peaks only have a few names in the registers since 1980. So, there are few hikers around, but hunting is another story. The Elkheads are very popular for hunting in the fall and contain large populations of deer, elk, bear, etc.

One thing unique about the range is that hiker use is overall actually decreasing, rather than increasing as it is in most places in Colorado. The summit registers (which the Forest Service keeps record of) on most peaks indicate that they has more ascents in the 1960’s and 1970’s. Even before that, there were many summit logs from the 1930’s and 1940’s from sheepherders.

The Elkhead Mountains are made of old volcanic rocks 17-25 million years old. One thing unusual is that the Elkhead Mountains run west to east as opposed to north and south as the most of the ranges run in North America. It is impossible to generalize the general forms of the peaks because they are all so different, but most of the peaks are isolated rises from a huge plateau which forms the bulk of the Elkheads. Black Mountain itself is a huge mesa-like mountain, and rather flat on top. Some other peaks are pointed and symmetrical, while others (such as Bears Ears) are steep and rugged with high vertical faces.

Black Mountain is a fairly easy climb and there are two trails to the summit. The trails aren’t used that much, so there is usually some deadfall to climb over, but the ascent is easy. 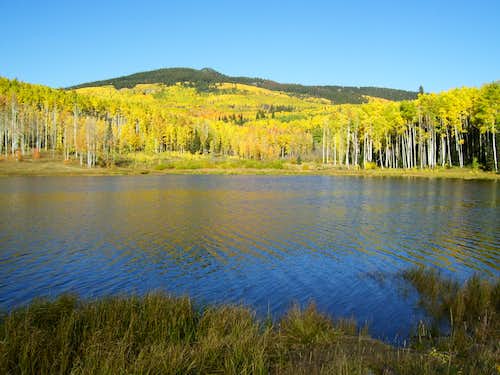 None of the currently available maps available show the trails or roads on Black Mountain accurately. The closest one that bears resemblance to reality is the Forest Service Map-Routt National Forest, but even that one has a note on the access road to the Southeast Ridge Trailhead that reads “approximate location only”. The Routt National Forest Map seems to be pretty close as to trail locations, but it of a very small scale (1:125,000) for hiking. The USGS maps do not show the trails at all, other than the Bears Ears Trail, which is labeled as Trail 1144 on the Forest Service maps. The USGS maps don’t show all the roads as well, but seem to show roads and trails that don’t exist; at least not any more.

From the junction of Highway 40 and 13 in Craig, turn north on Highway 13. Drive north for about 13 miles to north of mile marker 102 until you see a sign posted for County Road 27. The road is posted for “Forest Service Access” and “Black Mountain”. Drive County Road 27 through private lands for 10 miles which is where you reach the Route National Forest boundary. The road becomes FR 110. Stay on the main road for another 4.4 miles or so and park at an obvious saddle. This is about 14.4 miles from the highway. The road is gravel, but any car can make it, at least between July and September or October. 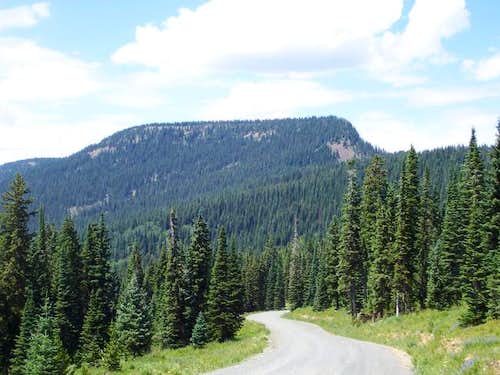 A good view of Black Mountain from on the road to the Southeast Ridge Trailhead. 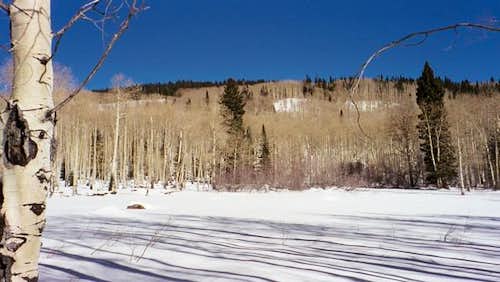 Near the trailhead at Freeman Reservior in winter conditions.

The trailhead for Trail 1144 is on the same road as the Southeast Ridge Trailhead. Follow FR 110 (see above) for about a mile past the National Forest boundary. There is a sign clearly marking Trail 1144. Park here.

The shortest and easiest route is via the Southeast Ridge Route. This route is 5.4 miles round trip to the rim of the summit plateau and 6.0 miles round trip to the true summit. The route is pretty easy and the only obstacle is fallen timber that you may have to climb over. The route only has about 900 feet elevation gain, and most of this is at the end and when climbing to the rim. 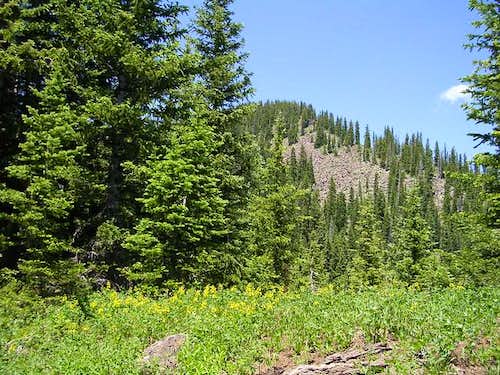 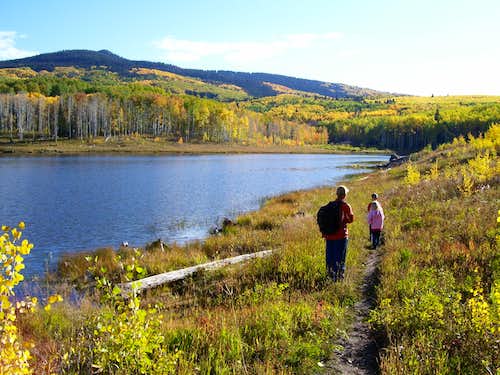 Black Mountain from near Freeman Reservoir.

The Loop Route using Connecting Trail 1144 is a loop hike combining the Southeast Ridge and Freeman Reservoir Routes. The trail is not well-used, and there is much deadfall to climb over, but it is reasonable easy to follow, though it is faded in places. There are several stream crossings as well. This route makes a nice 15.7 mile loop over the summit of Black Mountain and can be completed in one very long, or two shorter days. 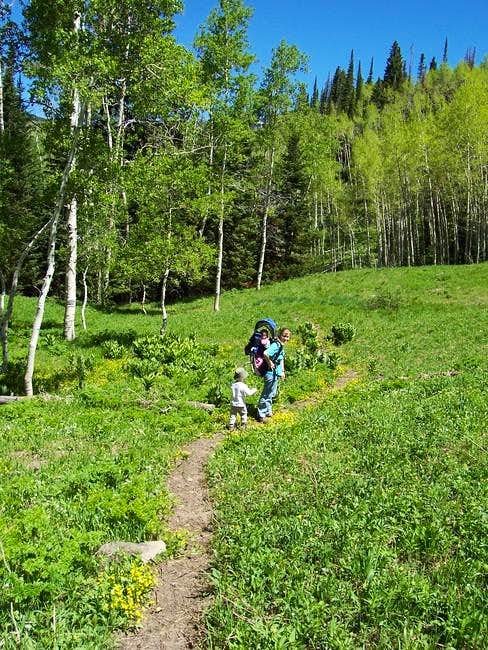 The latest Routt National Forest Map indicates a trail up Black Mountain from Forest Road 99, and is marked as Trail 1185.1 A. I haven't tried this route, but the junction with the route from the Freeman Reservoir is marked. The trail appeared little used and pretty faded so go prepared to route fine some.

Unless you enjoy bushwacking, the above routes seem to be the only practical routes on the mountain. The northeast side of the summit rim is very steep and forms a cliff, but is unlikely that anyone would want to climb from that direction because fighting through many huge volcanic boulders just to access and to climb fractured volcanic rock doesn't sound all that fun.

No permits are required. There is a summer only parking fee of $5 if you plan on parking at Freeman Reservoir. The other trailheads have no fee.

July through early September could be considered the normal season to climb the mountain.

The road to the Southeast Ridge trailhead usually remains snowbound until late June or early July. It remains open into October in most years.

The road to Freeman Reservoir is usually open in early or mid-June, but expect lots of snow on the upper slopes of the mountain in June, and sometimes in early July. This road usually is open until around Thanksgiving because hunters keep the road open until then. Stream crossings can be a problem in early summer along Trail 1144. Late September is the most beautiful season at least from the Freeman Reservoir Route.

The winter road closures are a very long ways from either trailhead. The best time of year to make a “winter” ascent in mid or late-November just before the road to Freeman Reservoir closes for the season. In mid-winter or spring, it will be a 3-5 day trip to climb Black Mountain unless you have access to a snowmobile. Keep in mind that winters tend to be much colder in Northwest Colorado than they are elsewhere in the state.

The Elkhead Mountains are a very popular hunting destination. Use extreme caution in the fall hunting season. Wear blaze orange during that time of year. Black Mountain is covered in aspen trees and is very beautiful in September and early October. 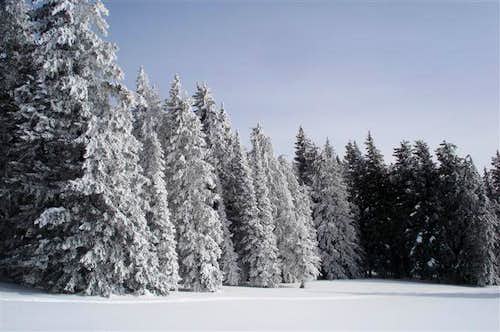 Trees on the northern slopes of Black Mountain in winter.

There are many informal campsites along the road to the trailhead after you reach the forest boundary. The Sawmill Campground is southeast of the trailhead and is now cost $10. No reservations are needed or taken. There are no really good backcountry campsites along the trail until you reach the flat summit plateau of Black Mountain. It would be interesting to camp on the summit plateau, but there is no water other than snowbanks before early or perhaps mid-July.

There is a fee campground at Freeman Reservoir which is the trailhead. Reservations are taken for groups. More information will follow soon. As with the SW Ridge Route, you can camp on the summit plateau.

Below is the National Weather Service Climate Summary of Craig, southwest of Black Mountain. The data is from 1928-2010. This is the closest long term weather station, but be aware that higher elevations will be much wetter and colder. Craig is at 6300 feet elevation, so expect the temperatures on Black Mountain to be 10-20 degrees colder on Black Mountain than in Craig.