Bull's-eye: Of Crowds and Cairns

No Crowds - No Cairns - No Summit

It seemed like a half hour had passed! Rob and I stood looking at Hourglass Ridge debating with each other, as well as with our fears, refusing to take those first steps. For a couple of noobs the ridge was intimidating, as the exposure on both sides of the little narrow path was extreme! Then there was the climb to the summit! If I survived the walk across the ridge I still would have to face the harrowing scramble to the summit. I couldn’t stop thinking that if I started sliding, the end result wouldn’t be pretty as the southeast shear face of Alice ensured a long fall. We wandered around the Alice/Chiefs Head saddle for quite a while trying to find an alternate route. We were intimidated to say the least, but finally we realized that the ridge was the route, and we rather easily agreed that it was time to turn around. It was the last day of August, 2007, and at that time we apparently lacked the skills to tackle Hourglass Ridge. To date, it would have been the most difficult route we had attempted. Or was it? 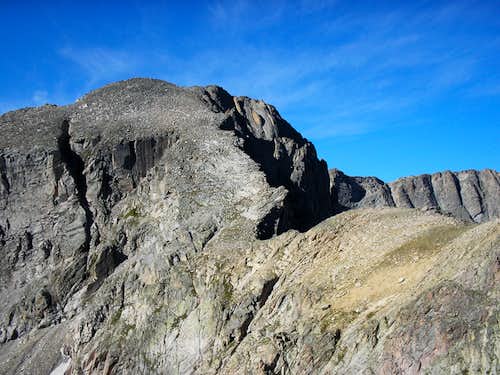 Hourglass Ridge
More so than a trip report, this is just my thoughts on an idea that I spent a lot of time thinking about last summer as I prepared for a return attempt on Alice’s Hourglass Ridge. I can’t remember when the thought first came to me, but I wondered why we were so intimidated on Alice that summer day in 2007, since we had completed a much more difficult summit the prior year when we bagged Longs Peak via the Keyhole Route. For obvious reasons, the Keyhole Route is much more difficult than Alice’s Hourglass Ridge. Or is it?

I suppose it does depend on how you define “difficult”, but the Keyhole Route has more steep scrambling, more sustained exposure, and as I remember, a couple of rather exposed moves. While the mileage and overall elevation gain is similar to the Hourglass, in my eyes the other factors would lean towards rating the Keyhole as much more difficult.

So if that is how difficult is defined, why were Rob and I successful on Longs in August, 2006 but were so intimidated and turned around on Alice a year later? This is the question I pondered for quite a while leading up to our 2014 trip. And one day I finally realized the answer. Alice lacks two things Longs has – crowds and cairns. Or in the case of the Keyhole Route – bull’s-eyes. I suppose back in 2007 I didn’t appreciate how those two items impact a route’s difficulty.

On our 2006 trip up Longs I remember being rather nervous as we approached the Boulderfield, thinking about the terrain beyond the Keyhole. Fortunately there was a gentleman up in front of us and he was obviously leading a couple of people up the mountain. I calmed my fears by following him up to the Keyhole. Then when I stepped through the Keyhole I had one of my most memorable and wonderful moments ever in the mountains. Leading up to the hike, I was pretty sure I was going to be nervous standing there, but it was the exact opposite. I had this amazing bout of confidence come upon me and without any hesitation turned to head across the Ledges. The glorious view of Glacier Gorge helped, but of course the bull’s-eye I stared at undoubtedly aided my confidence. I just didn’t realize how important those bull’s-eyes were at the time! A couple hours later I was standing on the summit, having scrambled and climbed through some amazing, and difficult terrain, having followed the sea of other Longs first timers.
But a year later I stared at Hourglass Ridge, and refused to take those first steps on what couldn’t be more difficult terrain than I had experienced on the Keyhole Route. Of course Rob and I stood at the Hourglass alone. And alone is the key word! There was no one to ask advice, and there weren’t dozens of other lemmings to follow. Up to this moment we hadn’t seen a single soul all morning. All we had was our own skill set and judgement, and the little amount of beta we had with us. I remember Rob making a comment, “There’s no one up here.” I didn’t think much about it at the time, but I now realize the importance of what he said.

And as for cairns, yes there are a few on the route as you climb up above Lion Lake no. 1 to the saddle, but in 2007 I didn’t even know what cairns were. But even if I did, cairns can’t compare to bull’s-eyes! Again, at the time I didn’t understand how important those bull’s-eyes were to my success on Longs. And they are the most dependable “cairns” ever! Unlike the random cairns interspersed on mountains all over the world, what could make one more confident than the perfect route painted up by the NPS!

Route finding has never been one of my strong suits, and back then it was even worse than it is now. At the time I couldn’t even read a topo map. Rob and I had the Trails Illustrated map with us, but that is what it was to me, a trail map. Rob did know how to read a topo and his doubts about our success started the night before. He spent quite a bit of time looking at the map, and all those topo lines near the Hourglass and Alice’s summit get really close together, which made him nervous. Before we even hit the trail he expressed some concerns to me. I was fine until we made the push to the ridge. A beautiful view of Alice comes into view above Snowbank Lake. I was immediately intimidated and lost all of my confidence. I had commented that “If that is what we have to climb to get to the summit, then I’m not going!” Neither of us had learned at that time that so often a route looks much more difficult, and maybe dangerous, from a distance. So finally, with no crowds to follow across the ridge, and no cairns to ease our doubts, we turned for home. 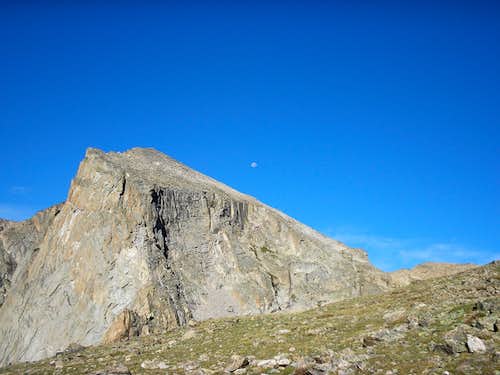 Intimidation Point
Of course, seven years after the fact, looking at those old pictures, the Hourglass as well as the “harrowing” scramble don’t look so harrowing. I had wanted to write about this subject last summer after a successful day on Alice, but success did not come. My nephew’s altitude sickness, which got worse as we approached the Hourglass, resulted in us turning back, and those circumstances resulted in a different subject for a trip report. Fortunately though, my son’s travel plans are taking him to Denver in late August, so sooner than expected it looks like I am going to get another shot at Alice in 2015. And since my son hasn’t been up Longs he wants to go up the Keyhole. I’m anxious to go for both routes on the same trip. Hopefully I’ll be able to get a fresh perspective on crowds, cairns and difficulty, and maybe figure out once and for all if the Hourglass is, or is not, more “difficult” than the Keyhole. 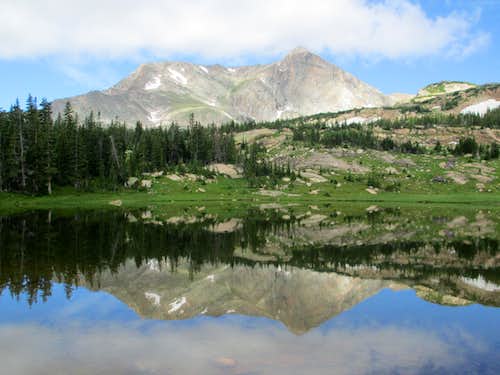 And this discussion does beg the question. Back on that wonderful August morning in 2006, if the mountain would have been empty that day, and there were no bull’s-eyes, would I have made the summit of Longs? The answer to that question is quite obvious. Hell no!

On Alice this year!!

Thanks Bill! When August approaches I'll get in touch. I'll have a little longer time in Estes this year so hopefully we can get a hike in...as well as a few beers.

I remember looking at Alice from that same point with a little trepidation but I pressed on as usual. That was just a couple of years ago. I don't recall there being anything that difficult or spooky. I think when you do it, you'll be pleasantly surprised. I thought Longs Keyhole had many more spots that could get you. Enjoy! I love it up there.

Yeah, I'm hoping to be pleasantly surprised as well. I love it up there as well. RMNP is a wonderful place, but I particularly love Wild Basin, partly for the scenery and partly because it is pretty empty. Happy Trails, Mark

I made the exact same agonizing decision 2 days ago. Had also summited more difficult peaks and know it always looks worse from afar (love taking friends up to S. Arapahoe to see their faces when I tell them, yes, you are climbing that). But being alone at the pass and staring up at the hourglass (slightly dusted, didn't help), I came to the same conclusion. Oh well, now have a great excuse to head up to the Basin again, can't wait.