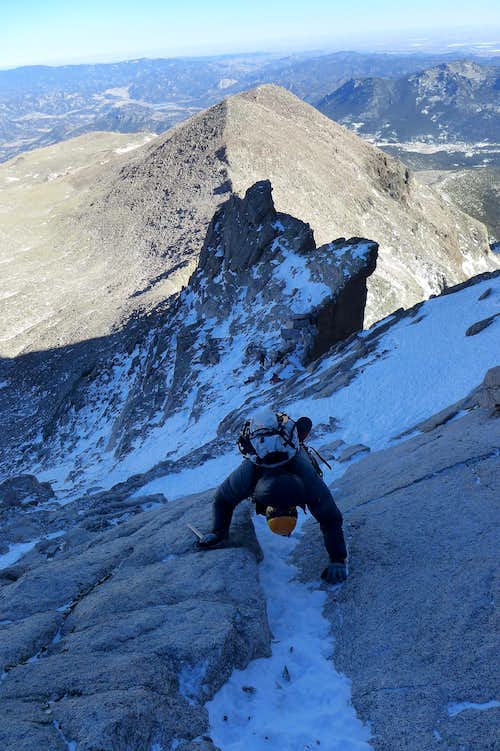 Approaching the base of the climb.
-Brian C.

The North Face; the Old Cables Route; there are few alpine routes in Colorado that have as much history or as a varied and storied past as the north face of Longs Peak. Due to its access to the Front Range (Urban Corridor) and ease of accessibility, Longs Peak has held dominion over many an aspiring climber.

I don’t think it would be much of a stretch to say that over the last 140+ years, the mountain has a kind of mythos woven around it; with of course, the north face playing a major role in its’ history.

The Cables Route was not the first line used to climb Longs Peak, that distinction belongs to Keplingers Couloir. Although the north face did quickly become one of the trade routes used in attaining the summit. Just to clarify an item, both ‘cables’ and 'north face' are used interchangeably with the de facto knowledge that north face means the old cables route even though there are multiple climbing routes located along the north face such as: Evs Chimney, Zumies Chimney, Right Dovetail, Mary’s Ledges and Keyhole Ridge even.

When the cables were finally installed in the mid-1920’s, people would typically ascend the mountain via the north face and descend the Keyhole route. This was becoming the standard circuit on the mountain, used even by the local guides. Now, the north face is often used as a quick descent route.

The first ascent was probably made by Enos Mills in the early 1900’s although I cannot find hard fact on this. By 1922 (same year Alexanders Chimney was first climbed & repeated two days later with Jack Moomaw), just over a 1,000 people claimed successful summits. The popularity of the mountain was steadily growing.

After being established in 1915 (Rocky Mountain National Park), the park staff and rangers realized the popularity in climbing Longs Peak was slowly increasing and consequently, the chances for an accident or mishap. So in 1925 under the supervision of famed Ranger Jack Moomaw, the NPS installed almost 200 feet of bolts and cable up the lower technical section of the north face. And for almost 50 years, it remained like this until 1973 when the National Park Service decided it violated the tenants of ‘leave no trace’ and wilderness ethics...so they were removed.

In terms of the climbing history of this route, I could probably write up and summarize this route in no less than 8-12 pages. But, that's a different subject.

Since the removal of the cables, the Keyhole has usurped the popular vote as the standard route. The old Cables Route however is still popular for those technically inclined (plus it's an insanely fast way to the summit and back down) and serves as a great first alpine trad lead climb for the beginner.

The approach to Notch Couloir leads you into one of the best and most scenic alpine spots along the entire Front Range…Longs Peak Cirque. Leave the Longs Peak trailhead and follow the well-word path to Chasm Junction about 3.5 miles. At the fork, there is a horse/llama tie and small outhouse. Take the right-hand fork and continue hiking across Lady Washington’s Eastern slope to Granite Pass. The trail junction at Granite Pass with the North Longs Peak Trail (accessed via Bear Lake Road) lies 4.2 miles from the patrol cabin at the main trailhead. Stay left and continue hiking up towards the Boulderfield at 6.0 miles. Hike south across the Boulderfield towards the obvious North Face. Lady Washington is on the left and the Keyhole and Storm Peak (an unranked sub-peak) lay off to the right.

A feature you may heard of is Chasm View. It is the distinct notch on the ridge between Mt. Lady Washington and the North Face. It is not necessary to scramble up to this feature but the views of the Diamond from this very airy precipice are breathtaking!

Scramble up a scree gully located to the right of a prominent rock rib. The gully will give way to tilted ledges and slab granite. The start of this climb is a shallow, slightly right-leaning chimney. The belay ledge is chossy but big. There is a visible eyebolt roughly 65’-70’ up this corner. Rope up and tie in. This is the start of your climb. This belay ledge is often sloped over with wind-hardened, compacted snow in winter and spring. Extra protection for the belayer might be necessary.

Some parties may choose to climb this in one pitch. And to be honest, my opinion is that it's easier if done so. However, if this is your first or second lead alpine climb, the eyebolts make a decent halfway point to split this climb into two pitches. Winter conditions may dictate this anyway. One thing to keep in mind is if ice or water is present, the route difficulty will go up (5.5ish). This route seems to be VERY conditionally dependent. I have the climb listed in the header as one pitch but I'll describe it in two.

Pitch 1 (5.4)
This is roughly 65'-70' feet or so. Start climbing the left crack (there are two of sorts). Holds are good and protection is decent enough in the beginning with smaller sized cams or hexes. Climb this crack while smearing feet on small toe lips. Climb in this fashion for about 40’. There will be an awkward left move out of this shallow crack system. Kick your left foot up (about waist high) and reach the left hand to perform a mantle onto a great flat ledge.

Step up onto this ledge, step up, back right onto a small boulder back in to the crack system and follow for another 15’ or so. Tie off the eyebolt. The chimney is gone by this point replaced by a thin crack and slab granite. This small flaring ledge will accommodate about two people and a third about 4'-5' below.

Pitch 2 (5.3)
The second pitch (if you’re breaking them up) also runs at about 70’ or so. It is slightly easier with more slab. With good eyes, you can see the second and top eyebolt at the end of this short pitch. Protect the pitch via the thin crack on the left with small cams. I thought hexes and chocks to be worthless along this stretch. Use your feet on this segment.
As you climb closer to the eyebolt, the rock directly overhead will bulge slightly. Perform another left maneuver to exit onto a great dirt ledge. Climb the slab directly ahead to a better belay ledge parallel with the eyebolt. Tie in and bring up your buddies.
The remainder of the route to the summit is 3rd class scrambling with a multitude of cairns to follow. Options exist to make the scramble 4th class if warranted.

Recent report up the North Face --Report by Otina

Cache of reports via 14ers.com

I did the North Face in April 2003. It is a great snow climb with only one small crux section. If you want to protect it bring 2 or 3 1 inch cams or nuts. Above the crux its just step kicking to the summit. We only brought a 30 meter glacier travel rope, and we were able to rappell the difficulties with 15 meters of rope. However, the consequence of a fall from the crux isn't terrible either.

If climbing it in the summer just a set of nuts and mid sized hexes will do along with some slings. When I did it the route(mid september) it was covered in snow and ice and I wish i had brought some mid sized cams along with crampons and an ice axe.