Caldera de Taburiente with its external slopes takes up the complete northern half of the island of La Palma (Islas Canarias). It is, simply said, the largest erosion crater on this planet. Just figure the following statistics:
All this results in one of the truly most impressive mountain ranges you can find. All the highest mountains of La Palma are located on the crest of the crater, easy to access from the outside but impossible to get at from inside the caldera. Here you can find vertical walls of up to 1500m height, notably the ones to the north-east of the crater. The Caldera is open on its southwestern side, where Rio de Taburiente, the only river on the Canarias, has carved out a deep gorge (Barranco de las Angustias) towards the sea. This gorge in itself is worth seeing since even here you can find those 100m walls.

Caldera de Taburiente is the leftover of a giant volcanic mountain range rather than a single volcano. It consists of rather lose material (no climbing through the walls) which is in a permanent state of erosion. When we visited Piedra Llana on the crater rim we could hear a huge landslide on the inside of the caldera when several tons of rock toppled into the crater. Today's form of the caldera was created 550.000 years ago when huge chunks of the mountain range slid into the sea to the western side of the island. Ever since wind and rain have sculpted the rocks to leave truly impressive towers.

Since climbing is no option around Caldera de Taburiente it is a veritable hiking paradise. There are two access possibilities for the inside of the crater, one along Barranco de las Angustias, to the southwest, on from the Cumbrecita saddle, which is located almost directly to the south of the caldera, in a place where the rim suddenly drops from 2000m to 1500m. Moreover there is a beautiful two day trekking trail along the rim of the caldera, the "Ruta de la Cresteria", which starts at sea level and does a 270° circle of the crater before ending at Reventon Pass, where the Cumbre Nueva Mountain Range starts. It can be combined with the equally beautiful (but completely different) "Ruta de los Volcanes" along the crest of the Cumbre Vieja Mountain Range in the south of the island. This would result in a three or four day treck without any real shelters. Consequently it should only be done in perfect weather conditions.

Oh yes, the weather: usually you can expect clear skies in the mornings. Depending on the amount of humidity still in the air and on the ground over the day clouds build up on the inside of the crater (starting in the north-west). These clouds usually hover around the caldera crest only occasionally leaving enough room to look into the crater itself. On humid days the whole caldera will shroud itself in clouds while on arid days the eastern part will be left free of fog. In this case, in the evening you'll have perfect skies again.

Mountains on the Crest

As said above, the caldera crest is home to the highest mountains of La Palma. Many of them can easily be reached by a road which serves the (multiple) astrophysical observatories near Roque de los Muchachos. The highest summits are located to the northern and eastern sides of the caldera and all reach elevations of more than 2200m. The "Ruta de la Cresteria" does not lead across the summits so a little side stepping is always necessary. Starting from Puerto Tazarcorte you will see the following summits: 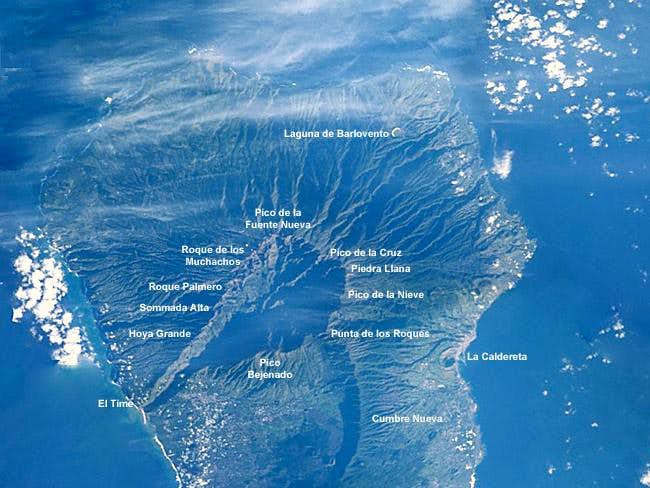 La Palma, like all the other Canarian Islands can easily be reached from almost all major European airports. The airport is rather small and compared to Tenerife or Gran Canaria air trafic is rather low. There are almost no regular flights but all year round you'll be able to book charter flights.

Inside the Caldera
There are two trailheads for the inside of the crater:
Caldera Crest
The crest of Caldera de Taburiente is most easily reached by the mountain road LP-22. If you want to start the Ruta de la Cresteria from sea level you have to go to Puerto Tarzacorte instead. The other entry point for the Ruta is Reventon Pass which you will most easily reach from the little Chapel Ermita de la Virgen del Pino. 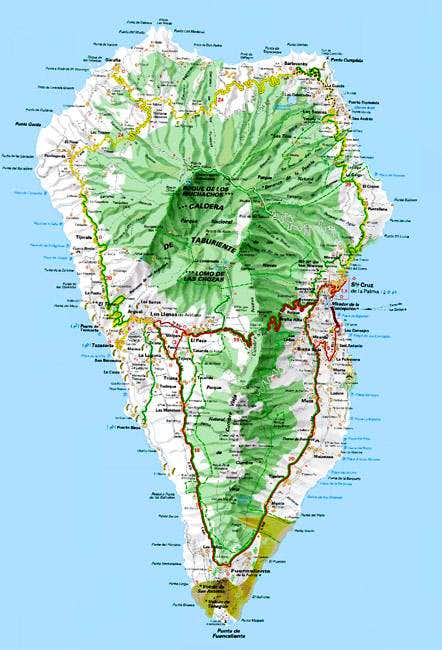 The caldera can be climbed/hiked all year round. In winter and spring you might encounter heavy rains which means landslides and a flooded Barranco de las Angustias. On the rim you often find snow and - believe it or not - crampons might be required, especially when the snow gets rained upon and ice layers form.

Camping is a bit of a problem on La Palma. There are some official campgrounds in the north but the one near Los Canarios is still a project. There are, however, a couple of "Zonas Recreativas" where sometimes you are allowed to pitch a tent. For the caldera this would be at Playa de Taburiente for which you have to obtain a one day permit beforehand. It can be obtained at the visitor's center at the intersection of LP-2 and LP-202 (sse Getting there for the Cumbrecita Trailhead).

I'm a bit at a loss here. Usually all year round the Canarias have the same weather with litlle alterations: north-eastern trade winds which deposit fog and dew on the north-eastern slopes of the islands. The eastern and southern parts usually are very dry and there you'll get some hours of sunshine each day. Especially on the higher islands like La Palma you usually don't have to worry about weather too much. The mountaintops will stick out of the clouds.

Now here's my problem: when we were on our vacation to La Palma in late Febuary 2005 we had a week of fierce western winds which were loaded with moisture. We had veritable downpours for ours on end and several times couldn't even drive by car because the roads were flooded. I'm quite sure that this was a freak phenomenon. The western side of La Palma usually gets 28cm (19 inches) of rain per year!