Camp Creek Bald, locally known as Viking Mountain because of a former resort that once stood near its summit, is a mountain located on the Tennessee/North Carolina border in the counties of Greene, TN and Madison, NC. This 4,844-foot tall peak is easily identified by its assortment of towers near the summit and features prominently from many locations throughout Greene County, Tennessee. A particularly good place to view the mountain is from the final resting place of Greeneville, Tennessee's most famous resident: Andrew Johnson, the 17th President of the United States. 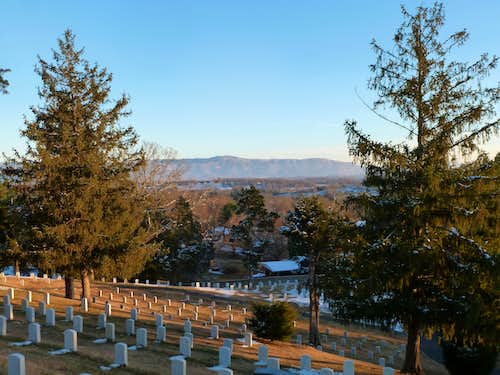 In addition, Camp Creek Bald is one of two candidates for the highpoint of Greene County, Tennessee. (The other candidate is Gravel Knob.)

From the dead-end road at the site of the former resort at Jones Meadow, there are wonderful views west into Tennessee including Greeneville, 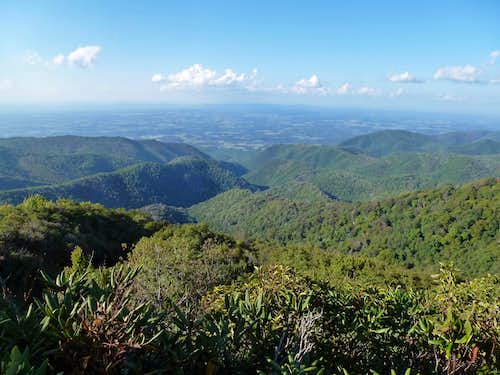 and over to Blackstack Cliffs. 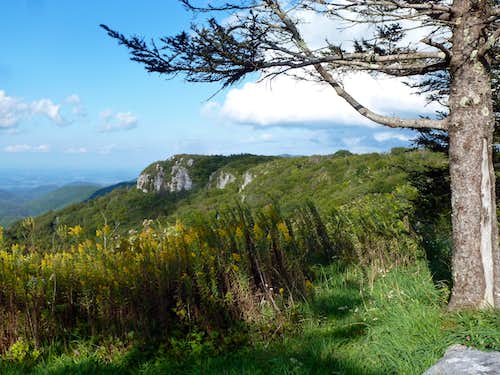 The quickest way to access the summit of the mountain is via the Viking Mountain Road. From downtown Greeneville, Tennessee head southwest on S Main Street to Tennessee-70 (locally known as the Asheville Highway). Make a left onto TN-70 and follow for 14.8 miles. After 14.8 miles make another left onto Viking Mountain Road (also known as Upper Paint Creek Road). This road will start out as paved, then eventually turn to gravel, before becoming a paved road again near the summit of Camp Creek Bald at Jones Meadow.

The Viking Mountain Resort is legendary amongst local Greeneville citizenry. According to popular myth, in its heyday the resort hosted Elvis Presley, who flew into the site in a helicopter as a potential investor. The history of the resort dates back to August 11, 1964. It was on this date that landowner Walter Brannan sold his property on Camp Creek Bald to a group of local businessmen who had organized as Bald Mountain Inc. By 1968 the group had cut part of a ski trail and constructed a few chalets.

The group influenced the United States Forest Service to transfer maintenance of the access road (now known as Viking Mountain Road) to Greene County with the expectation that the county would improve the road. However, the expected upgrades to the road never happened. This lack of improvements to the access road doomed the resort.

By the end of 1968, Bald Mountain Inc. was in serious financial trouble. As a result, the resort was sold to an investor from Florida named Frank Kaehn. It was Kaehn who renamed the resort Viking Mountain. Kaehn did much to improve the resort property. He built a lodge known as Valhalla Inn which was well known for its fine food. He also built a number of small round cabins (they looked much like yurts) that he called "roundettes". The first (and only) Viking Mountain resort ski season opened in February of 1972 despite the fact that by October of 1971, it was obvious that Kaehn was having financial difficulties just like his predecessors.

By 1973 the resort was sold again. This time the buyer was R. Eugene Holley, a wealthy oil investor and former Georgia state senate majority leader. Holley planned to use the resort as a private getaway for family and friends. However, by the late 1970s, Holley had claimed bankruptcy. He would also serve 16 months in federal prison after his conviction on bank fraud charges. After Holley's ownership, the resort changed hands several times in the 1980s, with no real success.

If anyone has photos of the resort complex, please add them! 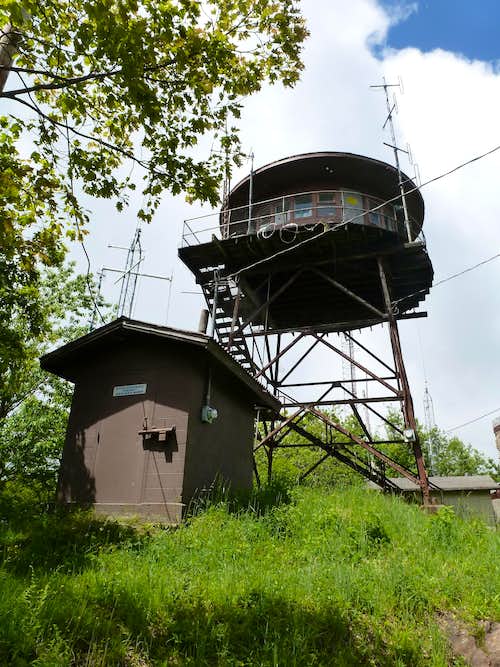 According to local fire tower expert Peter Barr, the original fire tower on Camp Creek Bald "may have been North Carolina’s first erected steel fire tower. Its original cement block that once supported its staircase still has the date 1929 engraved on its top." Barr goes on to state that famous Appalachian Trail thru-hiker Earl Shaffer spent the night in the tower cab in 1948 during his first thru-hike, the first thru-hike of the AT ever recorded. The original cab is now gone. It was removed sometime in the 1960s and replaced with the current round cylinder-shaped cab. The current cab is inaccessible to the public.

Camp Creek Bald can be climbed year-round. However, Viking Mountain Road, the road that leads to the summit, may be impassable after winter storms.

The Appalachian Trail is amongst the routes that provide access to Camp Creek Bald. The Little Laurel Shelter is located about 1.3 miles south of Camp Creek Bald on the Appalachian Trail. In addition, it appears that people may camp at the end of the Viking Mountain Road at Jones Meadow. However, this campsite appears to be a major party destination, so any camping would be done at the risk of mingling with a crew of boisterous lads and/or gals.