Springer Mountain is a small part of the Appalachian Mountain chain extending from Cape Gaspe, Canada to Alabama, US. It is most well know as the southern terminus of the world famous Appalachian Trail. Indeed the AT makes this otherwise nondescript mountain a world destination. This is a hiker's mountain and no technical routes exist although a north Georgia ice storm can make for an interesting walk!

There is some uncertaintly as to the origin of the name. It is most likely named in honor of William G. Springer, an early settler appointed in 1833 by Governor Lumpkin to implement legislation to improve conditions for the Indians. Another possibility is that Springer was named for the first Presbyterian minister to be ordained in Georgia, John Springer, ordained in 1790. "As late as 1959, some residents of Gilmer County were still calling Springer, Penitentiary Mountain. According to the Gilmer County Historical Society, the name was officially changed by the Georgia Appalachian Trail Club (GATC). Nobody seems to know why it was called Penitentiary--the origin of the name having been lost over time." -- Victoria Logue

Arrive in Georgia, United States. Non locals generally take a bus or shuttle to Gainesville, and shuttle or taxi the rest of the way to Amicalola. That gets a person to the vicinity.

Another option is the FS 42 Trailhead at Big Stamp Gap. This is about 35 miles from the park but deposits you just .9 miles from the summit. From this parking area cross the road to the well-marked trail to Springer Mountain. The path is blazed with the familiar white rectangle of the AT

No permits, fees, or seasonal closures for Springer.

As of at least 15 May 2005 there was was a big sign on the bulletin board that proclaimed the Springer parking lot at USFS 42 was no longer a fee area and this is still the case in 2008.

There is a $5 charge to enter the Amicolola Falls park. Overnight parking is allowed in special lots near the Springer Mountain approach trail - above the upper falls parking lot. (Oct 2013, Vic Hanson)

The staff requests that hikers starting at Amicalola sign in at the visitor center, especially thruhikers for whom it is traditional.

Year-round hiking is possible. Of course fair weather (May - September) months are the most popular. AT thruhikers generally start from March - April.

The Appalachian Trail has a well developed hut system. Shelters in the vicinity include:
Springer Mountain Shelter .2 from the summit on the AT on a blue blazed trail
Amicalola's shelter .1 mile behind the Visitor Center
Black Gap shelter 7.3 miles up the AT approach trail, and
Stover Creek Shelter on the AT 2.5 miles north of the summit.

Springer is surrounded by Forest Service land so free camping is widely available, although jcroft reports "As of summer 2003, notices are posted requesting camping only at AT Shelter areas because of bear incidents." And unclehud further explains.

The Georgia AT maintainers have built several (perhaps 20) tent sites just north of the summit, around the Springer shelter. They request you use the sites exclusively in order to lessen impact to the wilderness. There are also 2 self-composting privies and an excellent water souce.

During our March 5, 2005 visit, there were probably 30 people there (thru-hiker season) but we had considerable privacy and really only had five people nearby.

You're back at the trailhead and your thoughts naturally turn to food and drink. Where do you go?

Good question. I am not familiar with the area so please post suggestions here and I will incorporate them into the main text. Thanks. 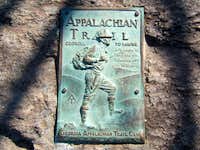 Of course this mountain is most famous as being the start (or end) of the Appalachian Trail. This 2,100+ mile trail traverses 14 states. The path is the brainchild of Benton MacKay who dreamed it up while on the summit of Stratton mountain in Vermont. A gigantic network of volunteers turned that vision into a reality and their work continues to this day. In 1958 the southern end of the AT was moved from Mt Ogelthorpe to Springer.

Each year 1000 - 2000 hikers will begin a 4-8 month trek of the entire trail. In recent years the completion rate has improved to 20%. Learn more about thruhiking the AT at the ATC's FAQ.

thx 4 the info. I'll incorporate it in a bit.

Thanks Vic, I've updated the main page with the new fee.

11/2015 - Warnings are currently posted at the summit of Springer, discouraging camping at the summit due to bear activity and environmental degradation. Recommended camping is at the Shelter, approx. 1/4 mi. N of the summit where there are about 10 level camping spots and a water source.