Trip Report:
The stars finally aligned and a long awaited trip up Mt. Colonel Foster's Cataract Arete successfully took place under perfect conditions July 30/31 2016. I had just been up the West side of Colonel Foster the week before and my body hadn't recovered very much when Andreas and I cracked a plan to climb the classic Cataract Arete the following weekend.

With family and professional obligations behind us we left Nanaimo later on Friday afternoon. By the time we hit the ground and started on the Elk River Trail it was 5:00 PM Friday evening. Such a late start had us pondering a stop at the gravel flats camp ground and a really early get up and go the following morning- fortunately we had wind at our backs and made it all the way to Foster Lake in a record 4 1/2 hours. A quick bite to eat and we were off to bed. Here's the view to the West from Foster lake with Elkhorn Mountain and the night sky. 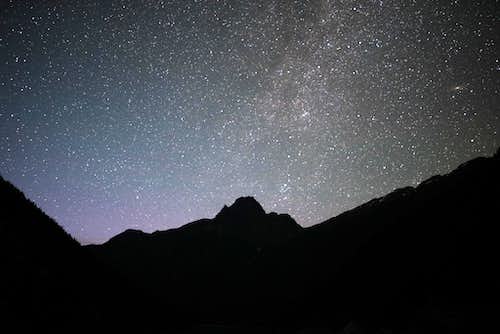 Elkhorn and the night sky

With our late arrival and my preference for a decent return to Victoria the following Monday we opted to get 6/7 hours sleep and bivouac on the mountain the following night. We had discussed resting the following day, Saturday, and climbing the route in a single push on Sunday- but after hearing about this "all world" bivy spot atop the route we opted to pack overnight gear up the East face. 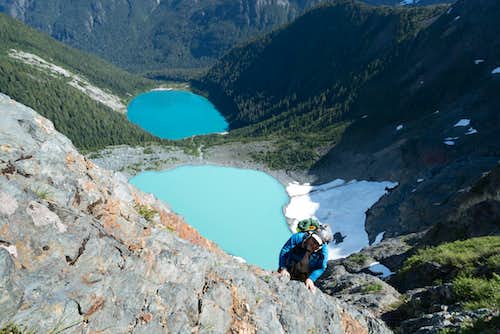 After a restful sleep we left the lake just after 7. The lower section of the route has you start further to the left of the face. There's a vegetated ramp that leads you to two gullies, the second, or gully on the right is the link to where the big rappel is. The lower section is mostly 3'rd and 4'th class scrambling. Once in the gulley the climbing gets steeper, especially near the top. The upper section of the gulley is somewhere in the 5.3 or 5.4 range.

Once out of the gully your reach a knoll from which you look down and see the falls deep within the face. You'll need to back track and down climb roughly 7 meters and then skirt around to left. We searched for a long time for this rap station, longer than I like to admit. After scoping the scene and searching around for the rap station I had given up and was looking for a new anchor for us to use when Andreas found the hidden slings. I had been a mere 3' away and did not see it, it's up and inside a crack and on an uber exposed ledge. 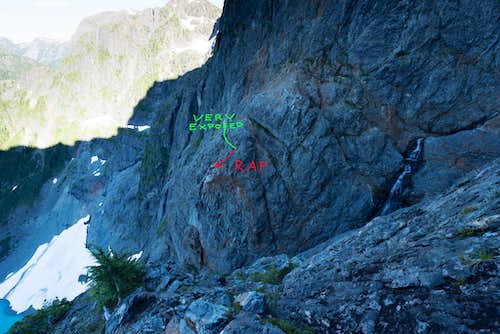 Here's Andreas just about to see what this 50+ free hanging rap is all about. It is a big rap, and there is a long free hanging section to it...the free hanger on the Monkey face is a little longer in the free hang department- it's memorable nonetheless! 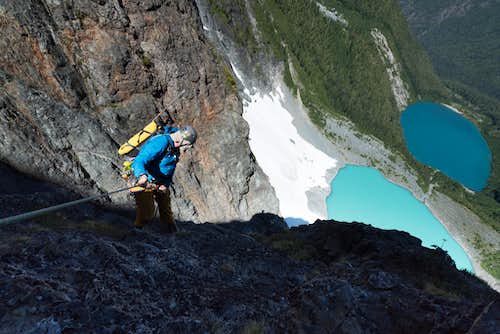 Once down to the creek, which is a tricky operation in it's own, (We opted to set another rap station and cross the creek safely) the crux of the climb presents itself. We crossed the creek near the lip of the falls (exposed!) and climb up there. You'll head up and be forced out right, the climbing isn't difficult, maybe 5.7, but the rock is suspect here, so tread carefully.

After a pitch or two the terrain eases off and the ropes went into the packs for some fun scrambling.

Higher up on the arete we opted to pull the rope out for a short section then scrambled across the classic au chaval section to the upper headwall. After: 1) burning time searching for the anchor at the falls, 2)initially choosing an exit from the falls that didn't go, and 3) having a late start to the day, we found ourselves watching the sun set and pulled out the head lamps for the last part of the route. Fortunately we were feeling good and in good spirits and up for a little night climb. Here's Andreas high up on the Arete shortly before the sun went down: 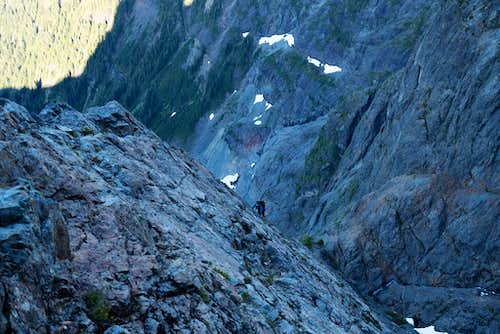 I had called Phil Stone the night before and was well aware that we'd find one really nice bivy spot near the top of the route, but should pass on that and continue a little higher for an equally nice spot with water. We climbed two pitches guided by our headlamps and found ourselves atop the route with a beautiful ledge and water 10' away! Once again we were treated to a stellar display of the night sky with the island alpine as a backdrop: 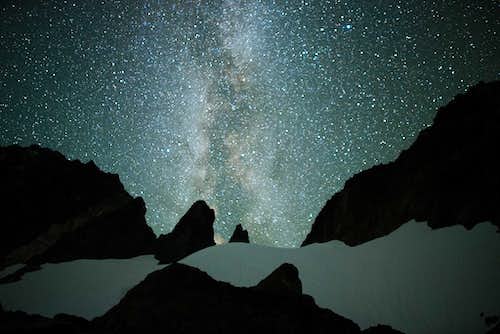 With the route below us we slept in and enjoyed the morning view from our exposed home: 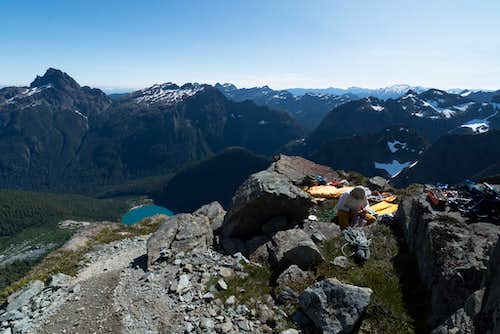 Here's a look down at the top of the arete and our home for the night: 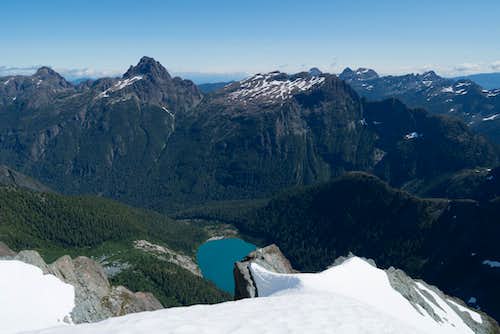 A quick climb up the glacier and we were looking down the Great West Couloir. Here's Andreas making his way up the upper glacier: 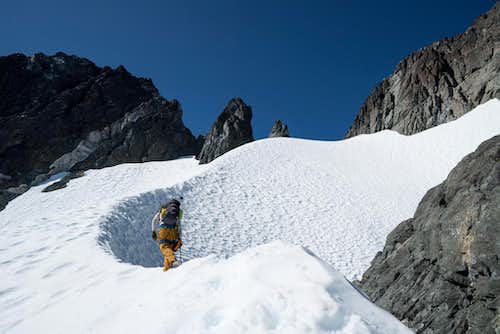 I had descended the Great West Couloir twice before, both times in Winter. Even so, we had a degree of trepidation as to what it's summer condition would be. Looking down the first two raps I'd say it is rather loose and loaded with rocks- Andreas did his best to knock as many down as possible. The Winter rap Phil, Josh and I set was 10' in the air, so Andreas and I hammered in a bomber knife bade for the first rap. We had two 45 meter rappels and found ourselves looking at moderately steep snow. We opted to set one more rap station before transferring onto the snow. 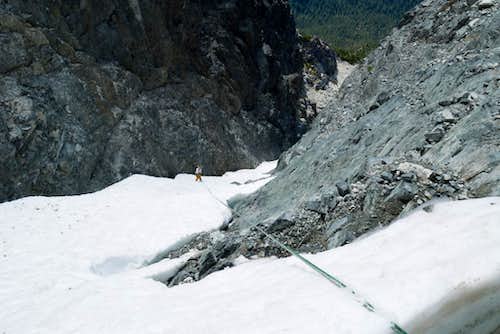 Once on the snow we down climbed a couple hundred meters and then as the snow tapered off down climbed 4'th class rock until the Couloir ends. Once able, we skirted around the West side of the mountain and shorty thereafter were looking down the Southern Approach from the South Col.

I think it took us 6/7 hours to climb up the glacier, descent the Couloir, track around the mountain and make it back to Foster Lake.

Approach Notes:
Detailed approach information, and other Colonel Foster routes are in "Island Select" and "Island Alpine" by Phillip Stone.