In August 2014 Darren Wilman and I had made a time-foiled run up the long ridge-arm that wraps around the south side of Colonel Foster’s east cirque high above Landslide Lake. From various vantages I had seen that the ridge was quite narrow and it looked to be technically quite straightforward potentially giving a really outstanding moderate scramble right through the heart of Vancouver Island’s most spectacular alpine terrain between Mt Colonel Foster and Rambler Peak onto a high point, Slocomb’s Rise (6,036ft/1,840m). Darren and I got quite far up the ridge before encountering a funky dogleg that the clock just wouldn’t allow for so we had turned around leaving unfinished business.

I mentioned the ridge to my good friend Josh Overdijk and in late August 2014 the two of us set off up the Elk River trail with it in mind to climb it. As we barrelled up the trail I reviewed in the back of my mind the various ways I had accessed the ridge in the past and at some point we agreed that instead of re-covering the same ground that Darren and I had the previous year, following the ridge crest direct from Landslide Lake, that we would hike up the Elk valley closer to Rambler Peak and use a sidehill short cut I had used twice before to reach the base of the upper steep part of the ridge.

We past the hemlock camp and began the uphill grind through the boulder field and onto the open avalanche chutes where there is an excellent view of the ridge leading up to Slocomb’s Rise. But it wasn’t the ridge crest that really caught our eye but instead a step, clean buttress on the east side of the ridge, joining it immediately above the dogleg that had turned Darren and I around the year before. Should we take a chance on that? There was decent rock and nice scrambling on the crest for sure but the buttress looked especially inviting and clean. All except a series of roofs at the very base but experience said there would likely be a way around that. If not we’d lose time and the gamble would be lost. 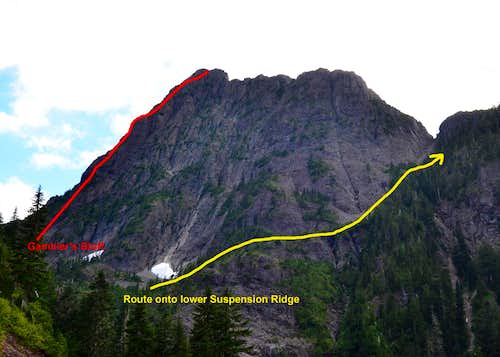 Josh and I crossed the little torrent of the Elk River and scratched around on the hillside for a bivvy spot. We found a couple of gravel patches that levelled out okay and hit the sack.

Next morning we were up before first light and went through the morning rituals of cursing the chilly early fall morning and savouring every last drop of coffee before heading up some smooth rock slabs above our camp. The outline of the roofs we had seen the evening before had given us a pretty good landmark to aim for which was invaluable as we crossed bands of 3rd class rock and patches of 5th class bush searching for the clean buttress above. The ledges and steps gradually steepened until we found ourselves on a surprisingly narrow stance right below our roofs. Sure enough, it looked like there was a line avoiding them up and to the right. We roped up and Josh took the lead gingerly stepping over a few loose blocks to get up onto a ramp underneath the roofs. Sure enough there was a steep but straight-forward corner system that was the key to unlocking a wide sweep of clean rock above.

We continued up basically following the crest of the buttress as it steadily tapered and the views of Rambler Peak and Elkhorn opened up. The rock was flawless! Clean coarse red basalt Island climbers are so familiar with. The terrain varied from 3rd class to about 5.8 with most of the climbing clocking in at low to mid 5th class. At the top of the sixth pitch the buttress was pinched to a narrow width as a deep gully cut in on the left side. At a ledge on the crest of the buttress was an amazing boulder-pinnacle belay and one of the steeper 5.8 pitches above. These next two pitches were highlights with great rock and fun climbing. The last pitch was fairly easy but delivered a fantastic finish onto the crest of the main ridge and jaw-dropping exposure overlooking Landslide Lake and the huge east face of Mt Colonel Foster.

Josh and I had joined the main ridge just above the dogleg that Darren and I had turned back from and a quick look down revealed no major surprises. Now for the part I had been waiting for! From the first high point on the ridge the crest sweeps down in a beautiful narrow arc, like a suspension bridge hanging between two alpine bridge towers. It’s all easy terrain, just a walk but it’s a couple of hundred metres worth savouring as the atmosphere amidst the neighbouring faces is stunning. 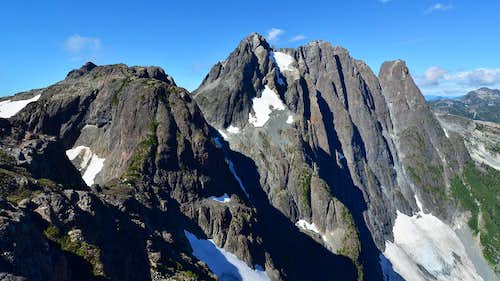 At the far side of the suspension ridge a pair of exposed vegetated gullies led up to the top of the second bridge tower and that was the end of the exposed terrain. We walked along the crest and up to the top of Slocomb’s Rise enjoying the warmth of the south-facing slopes and a refreshing drink from the clear meltwater running off the high snowfield on Slocomb’s east side. From near the top of Slocomb’s Rise is a gully that leads down to the South Col of Mt Colonel Foster. By starting up the climb we had just completed or along the whole ridge crest, the beta is now all in place for a complete traverse of Mt Colonel Foster, enchaining the whole of the Landslide Lake cirque from one side of the lake outlet to the other.

Josh and I dawdled plenty on the way down. The upper Elk Valley is a shady place other than mid-day and there was no need to shiver back at camp any more than necessary. We chatted about the Great West Couloir and agreed that we had made the right choice to hit up the ridge as a summer route and that we’d have to come back that winter and have a look at the couloir. Which we did!