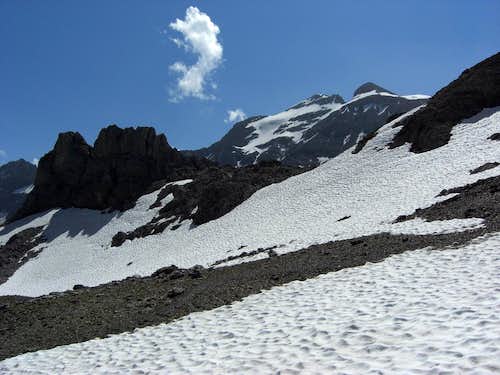 Clariden north face as seen from the north route

Clariden northern normal route (not the north face route!) is by far the most frequented route to Clariden. The route starts at Klausenpass (1948 m), which can be reached by car from the Zürich region within 1 to 1,5 hours. As Clariden culminates at 3267 m, there is “only” 1.300 m of altitude difference to summit an ice capped mountain. The route is well known in summer as an easy glacier “hike” with some rock scrambling in the end and in winter / spring as an interesting ski tour.

So you will not be alone on sunny days.

Nevertheless the route has many beautiful and diversified aspects. In combination with the other routes – Clariden hut route, Planura route, Hüfi route – Clariden north route is a great part of an even greater traverse, too.

The route uses the north slopes of Clariden and Chammliberg above Klausenpaß, then the unnamed glacier (maybe the northernmost part of Hüfifirn) up to Chammlijoch and follows then the west ridge up to the secondary summit, often the turning point in winter/spring for ski tourists. Between secondary and main summit, the west ridge gets steep, and exposed but is secured with iron chains to help you up or down exposed rock scrambling parts.

The route difficulty is, as I said, moderate. Due to the glacier melting, the so called “Iswandli”, in former times a very steep ice wall at the bottom of the unnamed glacier, which required a bit of ice climbing technique and was the crux of the route, is nowadays a steep ice slope which can easily be overcome with crampons and an ice axe. The crux, mainly for ski tours in winter and spring or after bad weather periods is now the upper part of the west ridge with its exposed rock scrambling. 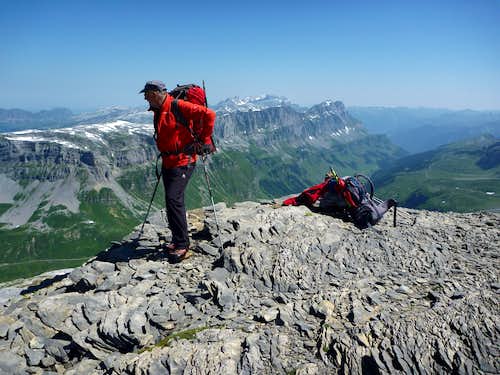 The trailhead is at Klausenpass, there are parking areas where you can leave your car.

Highway 13 and 3 goes from the Bregenz / Chur region to Glarus valley.

Coming from Zürich use swiss highway number 4 to Altdorf.

From Ticino / Tessin region use highway number 2 and Gotthard tunnel to Altdorf. 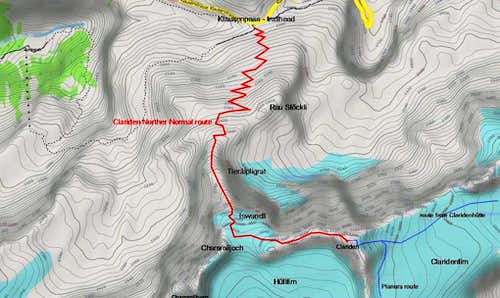 A marked and cairned trail ascends the meadows below Rau Stöckli summit above Klausenpass and traverses a creek at about 2200 m.

At about 2350 m hight the trail tends to disappear / get narrow and is now mainly cairned. At about 2500 m hight near Tierälpligrat the talus hopping increases and bits of easy scrambling makes the route more and more interesting. 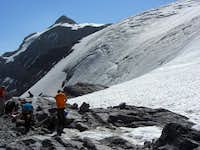 At Iswandli starts the glacier part

Views especially on the mountains north of Klausenpass are getting better and better.

Once on Tierälpligrat ridge the route follows this ridge first up to point 2633 m, then in some zigzags and more talus hopping and easy scrambling up to point 2867 m of the swiss topo map.

Now you are below “Iswandli”, the former crux of the route, nowadays the first and steep glacier slope of the unnamed glacier or the northernmost part of Hüfifirn. Ascend Iswandli straight away until the slope gets more levelled and Chammlijoch, the glacier col between Chammliberg to the west and Clariden west ridge to the east, comes into sight.

Turn left before you reach Chammlijoch and follow the glacier eastwards into the direction of the secondary Clariden summit and the west ridge (some crevasses). You should reach the west ridge a good part east of the point 3127 m of the swiss topo map, which is locates above Chammlijoch.

Enter the ice free part of the Clariden west ridge and ascend steeply on a narrow zigzag trail up to the secondary summit (3193 m, scree and talus).
From there descent on talus and rocks into the col between the secondary and the main summit.

At the east side of the col is the dark and unfriendly looking rock part of the west ridge. This part, about 100 m of altitude difference, is secured with steel chains. Scramble up the rock ridge to a level part of the ridge where the chains end. The last bit of the ridge is easier terrain, some rock slabs have to be overcome before you arrive at the broad summit with its excellent views.

Full glacier gear with crampons and ice axe is required in summer.

As the Clariden North Route is a ski tour route, too, you need full ski tour equipment and avalanche gear in winter / spring.

In summer the route is a combined hiking, glacier and scrambling route. On Claridenfirn crevasse danger is low but nevertheless existing! The rock parts of the upper west ridge are secured with steel chains, which makes the scrambling easier, particularly when there is ice and snow.

Full glacier equipment with harness, rope, crampons and ice axe is required / recommended, due to actual mountain and weather condition.

Up to the secondary summit the ski route should be an easy one though a bit steep in parts. The traverse from the secondary to the main summit might be difficult, depending on snow and ice conditions in winter / spring.