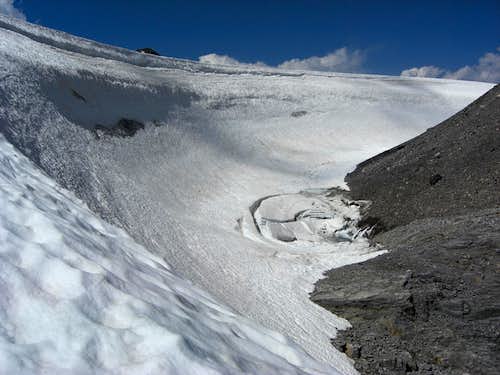 The route from Planura hut to Clariden is by far the shortest one to this summit. It is an easy glacier traverse which uses the huge glacier plateau of Hüfifirn and Claridenfirn and the east slope of Clariden summit. Only the bergschrund of this east slope can be nasty when open.

Planura hut is located spectacular on a rock above Hüfifirn at nearly 3000 m hight with breathtaking views on the surrounding mountains. So the hut ascents are all long and demanding with huge altitude differences between the trailheads and the hut. Consequently the route to Clariden is not only a short one but also one with a low altitude difference.

Planura hut is a great place to stay, recently renovated and with an excellent staff.

Below Planura hut are located two huge wind made snow hollows – it is said that these are the biggest ones of Europe. It is an interesting glacier feature, forming a breathtaking landscape. 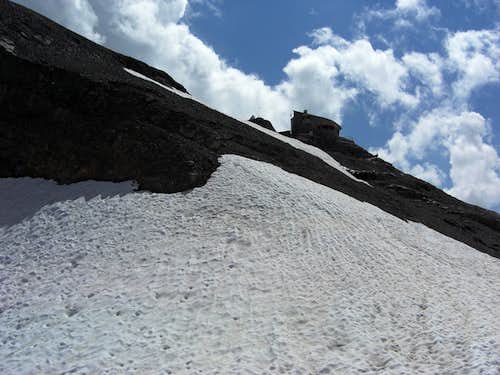 Information about Planura hut can be seen here.

You reach Planura hut as follows:

From the huts terrasse descend to the junction point of the two snow hollows and ascent steeply 30 m at the rim of the bigger wind hollow to reach Hüfifirn plateau. 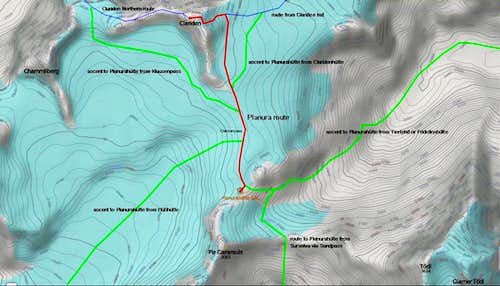 
Cross this plateau to the broad glacier saddle between Hüfifirn and Claridenfin.

Continue in the direction of the Clariden south ridge. Keep right of the south ridge and traverse the lower east slopes of this ridge until you reach the lowest point of a rocky eastern subridge, coming down from the south ridge.

After passing that subridge enter the east slope of Clariden summit and ascend this slope straight up to the bergschrund between the two rock faces of the south ridge and the main east ridge of Clariden.

Overcom the bergschrund and ascend steeply to the upper snow part of the south ridge.

Follow this south ridge shortly to the nearby summit cross. 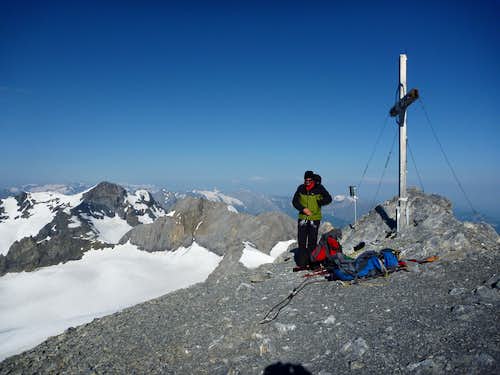 The upper part of the route is the same like the Clariden route. 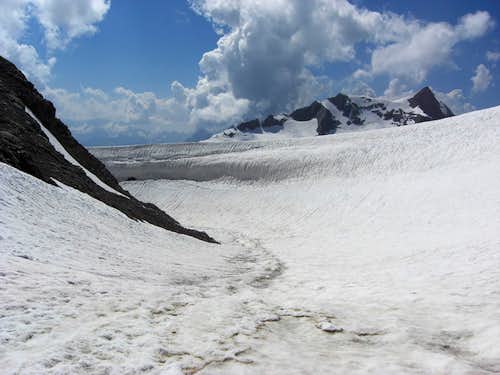 Snow hollow at Planura hut with Schärhorn in the back

Full glacier gear with crampons and ice axe is required in summer.

As all Clariden routes and nearly all Planura hut ascents are ski tour routes, too, you need full ski tour equipment and avalanche gear in winter / spring.

The route is an easy glacier route with no major difficulties. Only the bergschrund at Clariden east slope can be nasty when the snow bridge is collapsed. 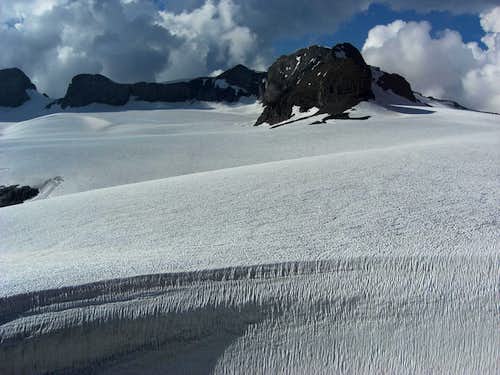