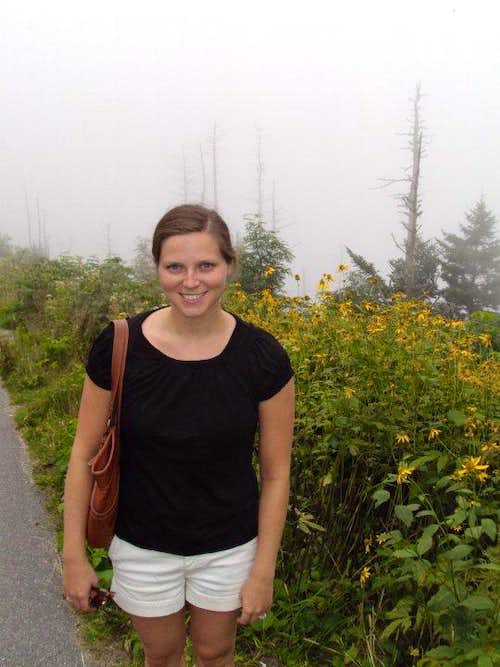 Time for the Molloy Family to once again hit the road as a move is in order.  This time, my Wife, who was finishing up her Doctorate in Pharmacy in Massachusetts, was finally moving out to live with me in Missouri.  It had been several years of living apart and we were eager to make the move and get back to living together like a "normal" couple.  As per usual we planned on stopping at various places along the trip to make it a little more interesting and to break up the monotony of driving.  One of the places on our list was Great Smoky Mountains National Park.

We like to stay at bed and breakfasts whenever possible so we booked a room at the Eight Gables Inn and I can honestly say it was one of the nicest bed and breakfasts we have ever stayed in.  The rooms were comfortable, the food was excellent and the service was great.  I would highly recommend it to anyone looking for a place near the park.  We got in pretty late so we went to the Inn the night before and didn't really see around.  But the next morning we drove through Gatlinburg to get to the park and let me tell you that place is something.  If you have never been to Gatlinburg I don't think I even have the words to describe it.  It is like a tourist trap on steroids, definitely not what I would expect going to a national park.  It was really crazy, there were people everywhere, tons of shops, a Ripleys believe it or not museum, carnival rides, I mean really over the top.  We weren't interested in that so we drove through and spent the day in the park which is worlds apart from Gatlinburg.

The park itself is beautiful.  We didn't have a ton of time to spend there so we didn't do a lot of hiking, we mostly did the drive through tour of the major attractions but we did make sure to stop at Clingmans Dome.  We didn't even know that the TN state highpoint was in the park until I picked up the little brochure that they hand out at all of the National Parks.  Once I knew that it was there we made sure to add it to our list of things to do so I could add it to my list of completed Highpoints. We stopped at a number of scenic overlooks and I was surprised to see that the park does really live up to its name.  The fog that collects in between the mountains in the valleys does really look like smoke, it stayed foggy like that for the majority of the day and made for some really incredible pictures.

After a few stops at various places in the park it was finally time to summit Clingman's dome.  Normally for a highpoint like this I plan to take a bit of a different route than the standard easy route from the parking lot but for this one we were pressed for time and there were plenty of other things to see and do in the park so we opted for the standard route which is a half mile hike along a paved path.  The path was really nice with tons of wildflowers and a few butterflies floating along.  The weather was great too with plenty of visibility but still with that misty fog low in the valleys that make this such a cool place.  Kim and I meandered our way up the path, which was quite crowded but still pleasant and made our way to the observation tower.  The trail was especially nice if you were traveling with kids or somebody who needed a wheelchair as the entire trail (to include the tower itself) are all easily wheelchair and stroller accessible. The observation tower was really impressive and gave great views of the park. and a bonus was that we got to see a black bear climb it's way out of the brush and hang out directly below the tower for quite a while.  It had been a while since I had seen a bear in the wild so we spent some time watching as he played in the underbrush.  You can tell the bears must be really used to seeing a lot of people because even though there were at least 40-50 people within a few meters of him he payed us no mind and carried on with whatever it was he was doing.

You can read more about our and see my pictures on my Blog here-
http://outdooroutlier.blogspot.com/2015/04/clingmans-dome-and-great-smoky.html