Some of the Lesser Known Classics

Most of the time, the "Classics" are classics only because they are well known and easy to get to. For every classic peak or route, there is one just as good that sees far fewer visitors. Some of the "less known classics" will be pointed out on this list.

Note that I sometimes mention summit registers with some figures. This is only meant to point out that the peaks are seldom visited. It is not meant to be a count of how many people have ever climbed a peak. Some climbers don't sign registers.

Also know that this list is by no means meant to be comprehensive. There are hundreds of such peaks. I only intend to list a few for you to enjoy.

Note that the words “unknown” and “lesser known” are arbitrary and there is no clear definition. Due to the immense popularity of the Colorado mountains, I have “lowered the standards” a bit when using this word in Colorado versus some of the surrounding states. A few (but certainly not all!) of the peaks on this page could be considered “fairly popular” if they were located in another state.

I offer these peak and canyon suggestions to you as places where you can find solitude, even on popular holiday weekends. Enjoy!

PS, much more is on the way!!! This is an ongoing project!

OK, so it’s not exactly unknown. Sorry about that. The Gore Range is actually extremely popular, and even most of the peaks seem to be fairly to very popular. Despite its lack of remote and unknown territory, I will still mention the range here because some of the peaks are still “lesser known” when in comparison to other places in Colorado, such as the Colorado 14’ers. You still can have a pretty good chance of finding solitude on some trips.

Eagles Nest is one of the most spectacular mountains in Colorado. It is also seldom climbed when compared to the 14'ers in the area, but still popular by what I usually refer to as “unknown” or “lesser known”. The peak will be on this list because it is very rugged and scenic, several beautiful lakes and meadows are present on the lower slopes, and several jagged and spectacular ridges and peaks are visible from the summit, and you can still have a fair chance of relative solitude. 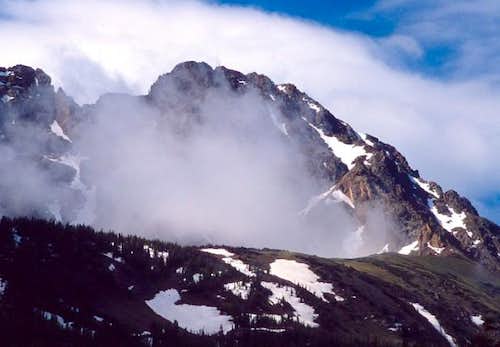 Like the Gore Range, the Flat Tops are not exactly little or unknown, but there are still opportunities for solitude. The Flat Tops are actually extremely popular, and even quite a few of the peaks seem to be fairly to very popular. Despite its lack of really unknown territory, I will still mention the range here because some of the peaks are still “lesser known” when in comparison to other places in Colorado, such as the Colorado 14’ers. You still can have a pretty good chance of finding solitude on some trips. I have only climbed a few peaks here, and most were popular, so consider this to be on ongoing projects. Expect more additions this summer.

It’s not exactly lesser known since there seem to be about six summit registers per year, but for now, it is the least known peak that I have climbed in the Flat Tops, thus it will be on this page temporarily. Pagoda Peak is a solitary and very interesting peak in the northern Flat Tops in Northwest Colorado. The peak actually does look like a pagoda when viewed from the south or west. The peak is little known when compared to the Colorado 14'ers, for example, but never-the-less the summit register indicates that the peak sees about six ascents per year. There is no trail on the peak, and there is one class 3 pitch of 50 feet or so to surmount when climbing to the summit. 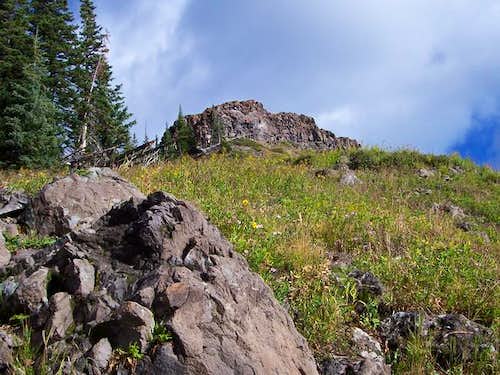 Though many peaks aren’t that far from the roads, most of the mountains in the Elkheads see few ascents. Though seemingly all peaks in the range can be reached on day hikes, they are wild in the sense that the area away from the roads are seldom visited. Out of my now almost two years of exploring the range, I have only encountered other hikers on one occasion. It is certainly possible that the Elkhead Mountains are the least known of the major mountain ranges in Colorado. This is partially because the range is a long way from any metropolitan area, and partially because the Elkheads are fairly low by Colorado standards, as there are no peaks reaching 11,000 feet. Despite their obscurity, there are still some scenic mountains in the range, and the range is a good place to find solitude.

Nipple Peak is one of the premier peaks in the Elkhead Mountains, and probably the most spectacular in the range. Despite its low elevation, it is an impressive peak and quite challenging in winter and spring. Rumor has it that the summit register contains less than one signature per year, but on our attempt, due to no beta, we didn't bring technical winter gear to finish climbing the summit block. 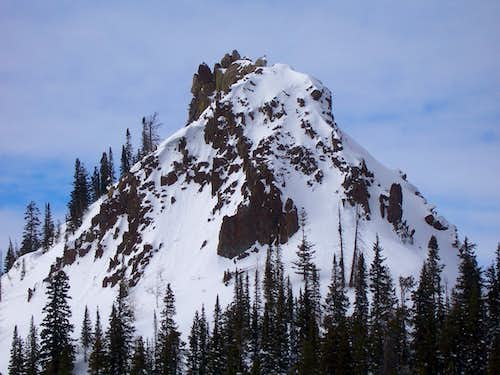 So, you like really remote peaks and territory? This is a really nice surprise. This area of Colorado, without question, has the most remote peaks in Colorado. They are incredibly spectacular and almost completely ignored. Over a dozen of very inaccessible peaks invite exploration. Only a few more accessible peaks will be mentioned here, but there is enough exploring here to keep one busy for years.

Cross Mountain is an undiscovered gem in Northwest Colorado. It is located just to the east of Dinosaur National Monument, and despite its low elevation, its views are some of the best in the state. Perhaps the most interesting feature of this mountain is that the Yampa River has cut strait through the mountain, forming the deep and impressive Cross Mountain Gorge. This divides the mountain into two sections, the north and the south. Both summits are well worth the climb. The southern section has one trail, but the northern section is still very much wild and remote. 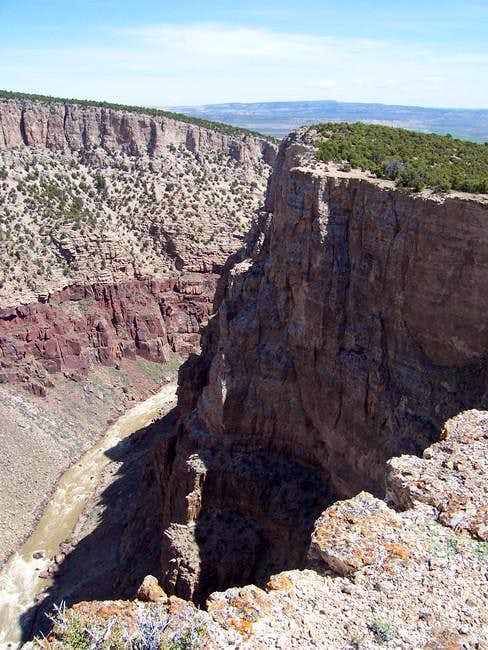 While it can be argued by some that this may not be a “true” mountain, one thing for sure is the fact that Steamboat Rock is one of the most difficult summits in Colorado. There have been a few ascents made, but the easiest known route is 5.10+ A2+ in difficulty and the rock is “dicey” at best. Unless you have access to a raft, you must swim the Yampa River to gain reasonable access, though one difficult access to the base exist from the north. 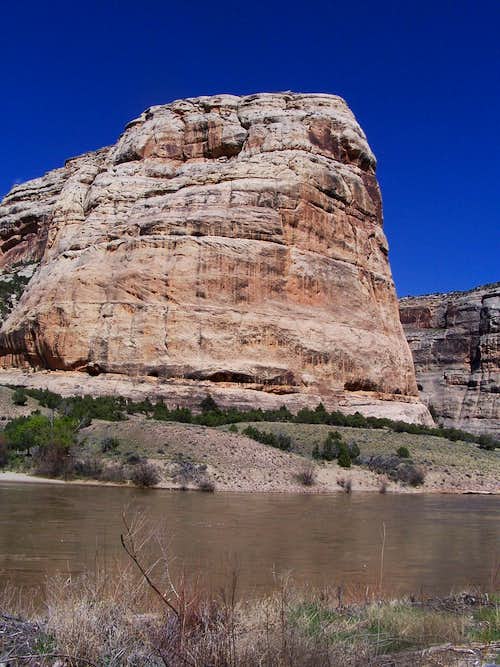 The aptly named Wild Mountain is another undiscovered gem. Stay tuned for an SP page soon. The south end of the mountain is especially spectacular. This mountain seems to be completely unknown despite it scenic beauty.

You won’t find any diamonds here, but you will find a “jewel” of a fairly isolated mountain. The mountain has some nice views and is surrounded by archeological sites such as petroglyphs.

”Outlaw Peak” is the name we have given to Peak 6489 because Outlaw Park is the nearest named feature. It is an incredible viewpoint in a spectacular area. The peak is very seldom climbed, and we thought that we were making the first ascent of the peak on September 3, 2006. We did however, find one cairn about half mile from the summit and 300-400 feet below it. No signs of previous ascent were on the summit, but the cairn was enough that we are not claiming it as a first. We left nothing ourselves except for some webbing and rings for rappel stations and some makeshift anchors in the canyons we used for the descent. 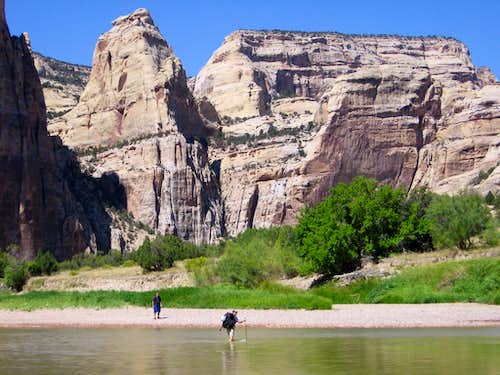 Buckwater Draw is a nice slot canyon that requires some 5th class climbing to get all the way through. The twisty and convoluted walls are a treat.

South Fork Buckwater Draw is also a nice slot canyon that requires some 5th class climbing to get all the way through. Both canyons are somewhat similar to those found in the Escalante or Robbers Roost areas of Utah. 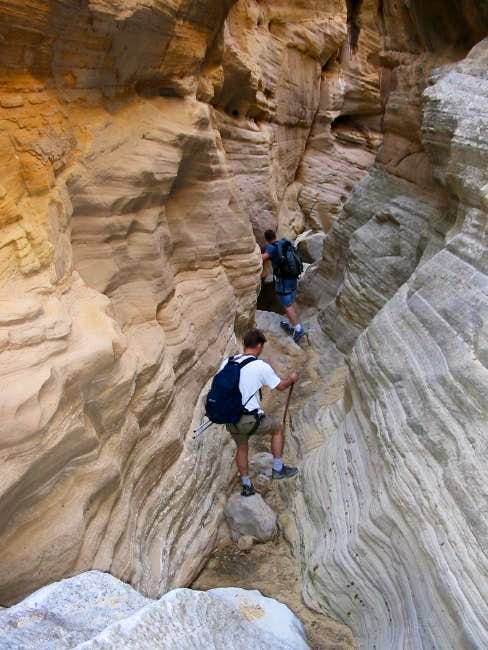 Believe it or not, there are some really spectacular peaks in this area. None are popular, and none are well known, but this is some very spectacular country. As long as you don’t visit in summer, you will find many awesome places to explore. Just a few are outlined below.

Without a doubt, The Palisade is one of the most spectacular mountains in Colorado. It is surrounded by high cliffs on almost all sides, and the views are nothing short of spectacular. Even so, it seems almost no one climbs this incredible peak, though if you look hard enough, you will find at least one route of class 3-4. All the other routes look really technical.

A mesa (literally table) is a word for a flat topped hill or mountain. There are some non-technical routes of Sewemup Mesa which makes for some interesting exploring. There are some really great viewpoints off the high cliffs, and also some hidden canyons to explore.

There are many opportunities for exploration in this mostly wild region. The canyons are spectacular and among the most interesting in the state. Only a few canyons will be mentioned here, but this is not because more are not unavailable for exploration, but because I have only explored a few of them.

Wild Steer is wild and scenic canyon, but it is very easy to get to. The canyon itself is pretty easy to walk, but there are many interesting climbing routes on the north side and to Davis Mesa. My route was 4th class and went up the second side drainage. If you look around you can see some petroglyphs in the canyon.

This appears to be a nice technical canyon, but I have only explored the rope less section in the upper end. If you want to see something really wild and unknown, bring you rack and ropes and descend the entire canyon. It should be scenic and interesting.