The upper “capstone” of the mountain is made of fossil-filled limestone with much older sedimentary and metamorphic rocks exposed in the depths of the anticline that can be seen by peering down the 1200 foot deep Cross Mountain Gorge.

Elk, deer, bighorn sheep, black bears, cougars, and other wildlife inhabit the mountain. You would have to be unlucky not to see signs of these animals. There are many raptors such as bald and golden eagles and peregrine falcons. We watched several of these birds from the north ridge of the north summit.

The mountain is 9-10 miles long and four miles wide at the widest point. The southern section of the mountain is less than 1/3 the size (area-wise) of the northern section, but both summits afford equally impressive views.

While Cross Mountain is basically unknown to hikers and climbers, it may be worth mentioning that is well known for the whitewater kayaking in the Cross Mountain Gorge. The run is often talked about, but seldom done due to the extreme nature of the rapids. Hiking to the summit is much more sane, but you will enjoy the views of the whitewater rapids located far below. 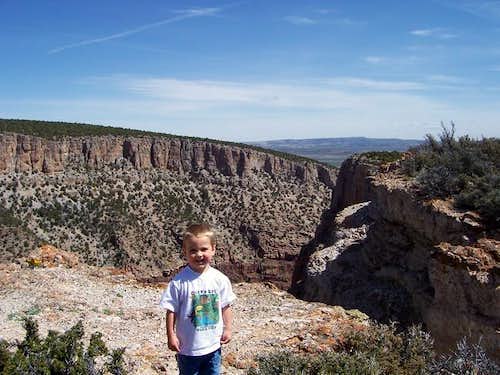 Kessler on the south summit of Cross Mountain.

The only gas station around is at Maybell, so make sure to stock up on food, gas, and supplies. Maybell is a bustling metropolis of about 30 people (though it does have the sprawling suburb of Sunbeam), and it has a gas-station store which stocks basic food and supplies.

From Mile Marker 44 on Highway 40, west of Maybell or east of Dinosaur, turn north on the road marked for Deerlodge Park. Drive this paved road north for about two miles to County Road 123 to the east (right). Go through the gate and follow the gravel road for another about half-a-mile to a junction on the left (north). This road is marked for the South Cross Mountain Trailhead. The road beyond here is for 4WD’s, and speaking from experience is not to be driven when wet! Follow the sign along the main track marked “Yampa Valley Trail”. Follow the road to the end and park at the sign at the trailhead.

From Mile Marker 44 on Highway 40, west of Maybell or east of Dinosaur, turn north on the road marked for Deerlodge Park. Drive this paved road north for about for 4.1 miles to a parking lot on the right (east side of the road). This is at the Yampa River.

From Maybell and Highway 40, turn onto State Highway 318 and follow it Northwest along the Yampa River. After a short distance, pass through the tiny community of Sunbeam. After a few miles, turn west (left) on County Road 10 (gravel) and follow it west. Follow this road all the way to the northern terminus of the Cross Mountain Ridge. Park on County Road 10 at an overgrown road on the left that is marked as being closed to vehicles. 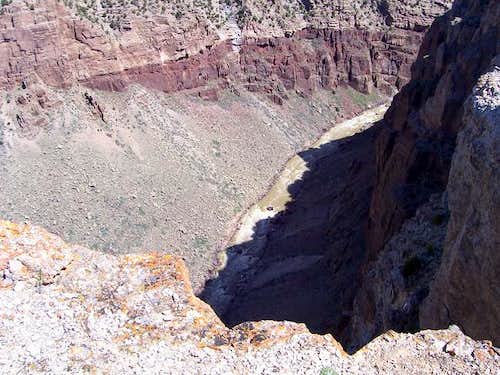 Looking straight down to the north from the south summit of Cross Mountain and into the gorge to the Yampa River 1200 feet below.

The below are overviews of some of the routes. Click on the links to view the route pages.

This is the only marked trail on the mountain. This trail has some of the best rewards-to-ratio of effort of any trail in Colorado that I have done. The route is only 1.0 miles round trip to the summit, and easy. You can still spend much time on this trail walking the rim of the gorge in either direction from the summit. 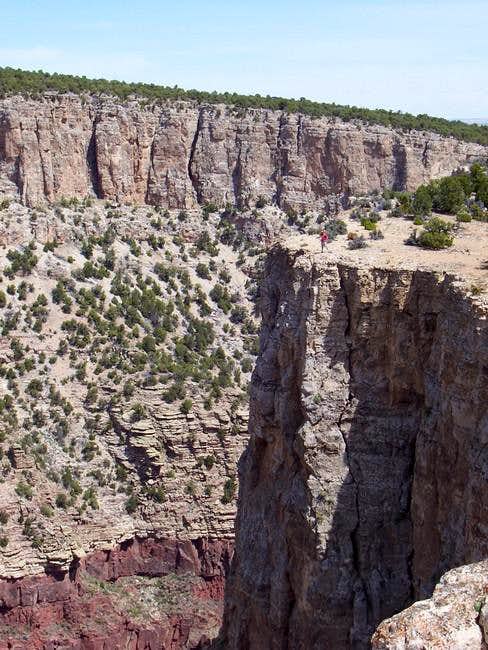 Photo of the huge drop off the South Summit of Cross Mountain. For scale, notice the person standing next to the cliff in the upper right of the photograph.

South Summit via the West and Cross Mountain Gorge

This is a more rugged and steep trail-less route. There are game trails to follow and the route is class 2. This may be the most spectacular route on the mountain because it follows the rim of the Cross Mountain Gorge up the anticline with spectacular views of the gorge for the entire distance. This route is about 5.5 miles round trip. 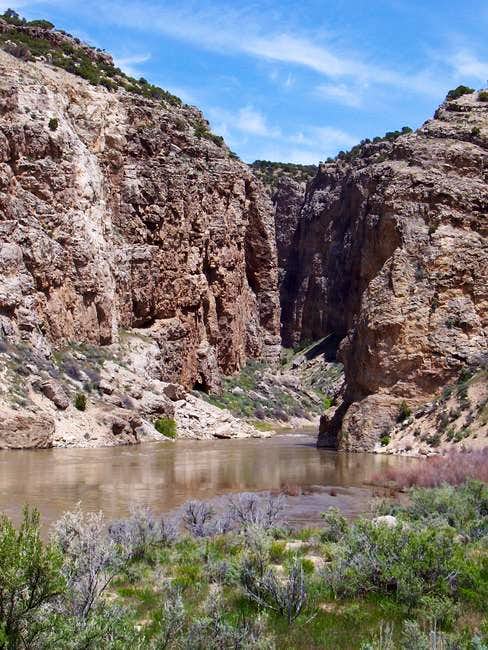 The northern summits have a different character than the south summit. There are no official trails, but game trails abound. The route is class 2 and there is minor scrambling. Once you reach the ridge crest, the grade of steepness lessens and the ridge becomes more gentle. Although we only visited the northern-most summits (3-4 miles round trip), it is almost certainly possible to follow the crest all the way to the north rim of the Cross Mountain Gorge. Doing so would be 16 miles round trip, and might make an interesting backpacking trip. 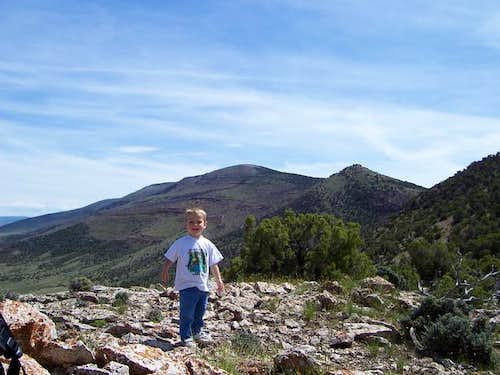 Kessler on the North Ridge Route of Cross Mountain.

The above are just the routes I have done, and are only a few possibilties. There are many other possibilities for routes on this mountain. Horse Gulch on the west side of the northern summit looks like it would make a nice route. The east side of the mountain looks to have several routes as well. You could follow the north rim of Cross Mountain Gorge from the west, but there is a ranch on that side of the river, so you would have to ask for permission.

Other than the fact that vehicles must stay on the roads in the Wilderness Study Area, there is no red tape, nor are there any private lands on the mountain.

Late April through early June is best. This is the high desert with some of the widest temperature ranges in the country. In Maybell, temperatures have varied from 102 in the summer, and -61 in the winter. Summers are warm and can be hot. It can be in the 90's, and there are no reliable water sources on the mountain. Winters are cold, and the winter extremes are ridiculously low here. It may surprise some to here that the lowest temperature ever recorded in Colorado (-61), happened not in the high mountains, but at Maybell, at only 5920 feet elevation and right near Cross Mountain. In the winter months, temperatures of -40 are fairly common, without the windchill.

The mountain could be climbed in winter, when everything is frozen, but the road to the South Cross Mountain Trailhead would not be open. In early spring, and possibly into April, everything is a muddy mess.

September and October can have pleasant temperatures as well, but Northwest Colorado is a very popular hunting destination. If you go then, wear blaze orange just to be safe.

Snowdrifts usually last until mid or late May. If you plan on backpacking along the crest, late April and early May is the recommended time to go because you should find some snow around for water. 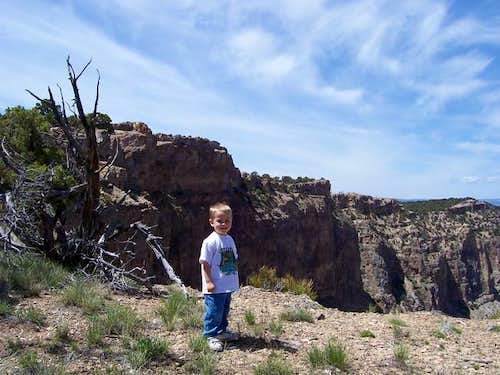 Kessler on the rim of the Cross Mountain Gorge just east of the south summit in May.

There is one campground in Maybell itself, and one outside and just to the west of Maybell where Highway 40 crosses the Yampa River. Both have a small fee, but don't take reservations. The campground is seldom, if ever full though.

Cross Mountain is surrounded by BLM land and you can camp anywhere (no facilities). Backcountry camping is an option as well.

Weather and climate data for Maybell at 5920 feet elevation is below. *National Weather Service Data 1958-2008.