So, do you like really remote territory? This is a really nice surprise. Pull open any guidebook to Colorado with the hikes and climbs marked, and notice the big blank spot in Northwestern Colorado. This area of Colorado, without question, has the most remote peaks and canyons in Colorado and almost certainly even has some un-climbed peaks and untouched canyons. The peaks are incredibly spectacular and almost completely ignored, despite the fact that it offers some of the best scenery in the lower 48 states. Over a dozen very inaccessible peaks invite exploration. Only a few of the more accessible peaks are on Summitpost, but there is enough exploring here to keep one busy for years.

”Outlaw Arch Canyon” is the name we have given to this canyon because Outlaw Park is the nearest named feature (besides the Yampa River). The canyon is seldom descended and we almost certainly made the first complete descent through the canyon in September 2006.

Later we found that this canyon has been known to some local river rafters as “Scoggin Draw” after the 1941 inscription mentioned near the mouth of the canyon. It was made by Charles Scoggin, a researcher from the University of Colorado who contributed substantially to the Dinosaur National Monument archeology in the years just prior to World War II.

Putting these routes up is one thing I have been working on and off for the last three years. A route from the north proved too rugged and impractical. A route from Mantle Park didn’t work out. There were a few more trips that ended without finding any viable routes to access the area. Finally in April 2006, we climbed the point on the south side of the river for a good close up view of Peak 6489 and the canyons surrounding it. We got off track and just happened to spot the couloir that would be the key to the lower part of the route. The upper part of the route was discovered mostly by accident when looking for routes into the nearby canyon. The obscure route up to “Key Saddle” proved to be the key that unlocked the door to accessing the nearby canyons.

This canyon is the one north of Outlaw Peak and is the recommended and most spectacular descent route after climbing the peak. 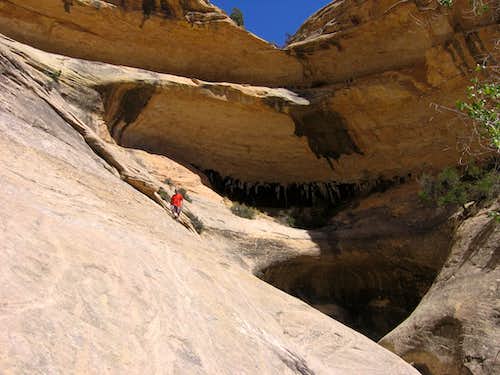 One of the traverses in Outlaw Arch Canyon.

The Discovery of Outlaw Arch

While climbing Outlaw Peak and descending Outlaw Arch Canyon, we discovered something special by surprise. What we discovered in the canyon and on a bench on the side of Outlaw Peak was a large natural arch. On Spetember 30, I returned with Jeff Fox and got accurate measurements on the arch. At 206 feet, it turned out to be the 9th largest known arch in the world, and the largest "new discovery" reported in the United States since Wrather Arch (Paria River Canyon) was first reported in the 1950's. Only one arch since then has been reported to be over 200 feet and it is in Africa in 2004. One may wonder how an arch could be hidden for so long (until 2006!), but there are three main reasons.

2. The arch is not visible from below, and you can’t get to it from below.

3. The arch is well hidden in a remote canyon, and the route to get there is very obscure.

Before this one was discovered, the 10 largest known spans are below: 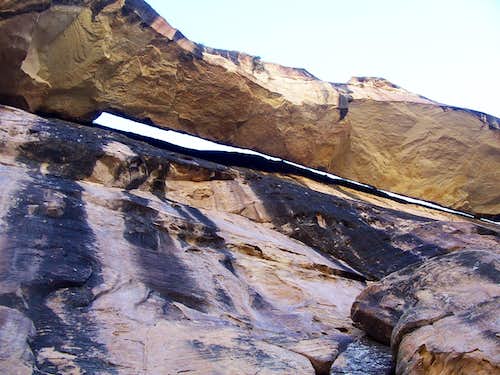 Outlaw Arch from below. 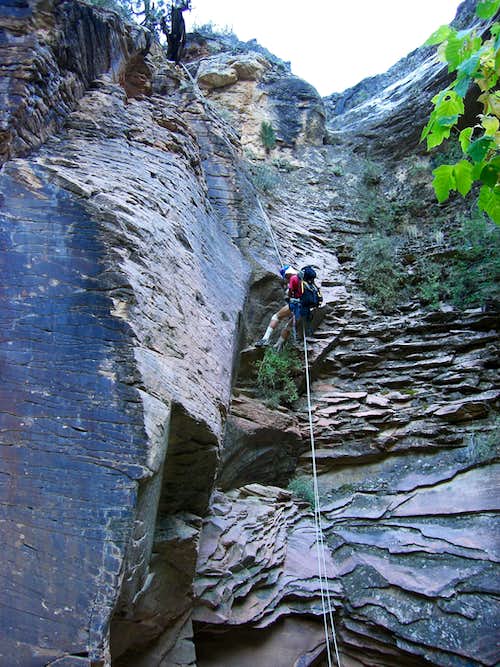 Option #4 is yet another option. It is the same as option #3, but comes in from the rim to the north and is equally difficult. The advantage is the views it provides, but it is a very rugged and strenuous route.

Once in the canyon, you will descend it to the river. This requires some technical downclimbing as well as rappels of natural anchors, a few of which might be intimidating. See the route page for details. 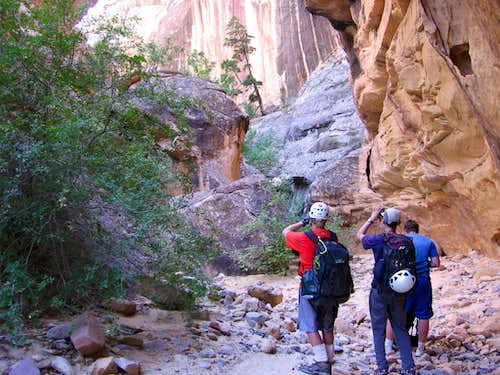 The canyons in this area are very pristine. Bolts and pitons are not needed to descend this canyon, and would detract from the incredibly pristine setting of this wild canyon. There are plenty natural anchors around for the technical obstacles. Try to leave as little behind as possible. This trip is certainly not for beginners; canyoneering techniques must be practiced before going on this trip.

Take care while visiting this area, because pockets of cryptobiotic soil exists in this region. Watch your step, especially in the flat areas frequented by bighorn sheep. Please use slickrock, rocks, riverbanks and sandy washes when visiting this area. 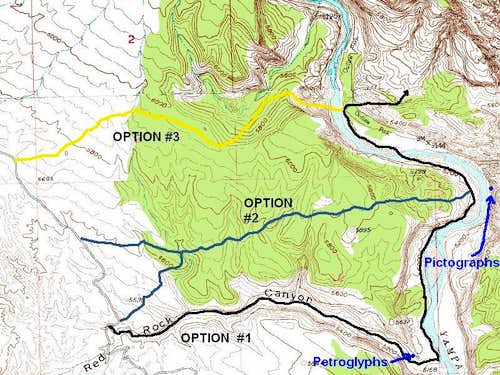 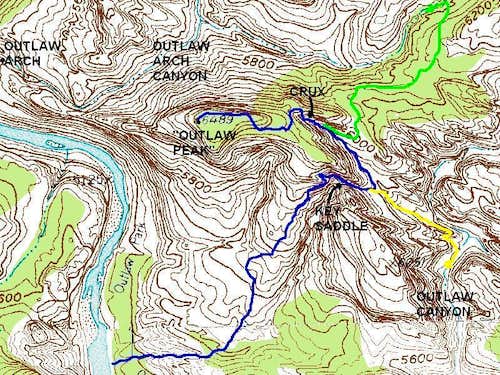 Map of the the route into Outlaw Arch Canyon, marked in green.

Camping permits are required for overnight use. The area is closed to climbing from March 1 through August 15 due to peregrine falcon nesting. 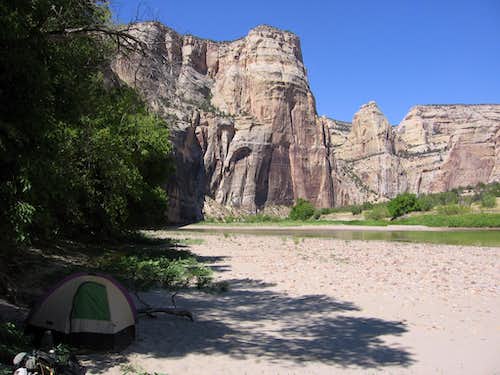 There are some great campsites along the river opposite Outlaw Park.

The area is closed to climbing from March 1 through August 15 due to peregrine falcon nesting.

You can visit the lower part of the canyon (which the closure doesn't affect) using an inner tube or life jacket/floatation will increase the season to include May through mid-August, but make sure you are a strong swimmer. The river is very cold in May and June, so a wetsuit would be standard equipment for the swim.

If you have access to a raft, you may work out a trip via raft. This would be the best way to see the lower part of the canyon, but you have to get a permit in advance. 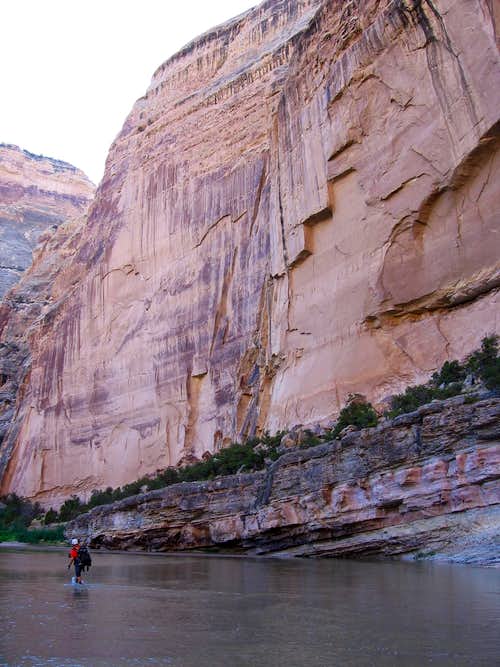 Wading the river and returning to camp from Outlaw Peak just after sunset after a long day.

This is a land of extremes and it is not uncommon to have the afternoon be sixty degrees warmer than in the morning. At the quarry, an average night in January is 4 degrees, and an average day in July is 95 degrees, but temperatures have been as low as -40 or as high as 110.

Weather and climate data for the Dinosaur Quarry is below. *National Weather Service Data 1915-2012.