Intro - For Now Only the Western Part

Sections of the whole trek are the following (all descriptions on this page will go from east to west):

It is worth mentioning that by this route also E7 (Europe long-distance walk) goes and Slovenian Geological path. 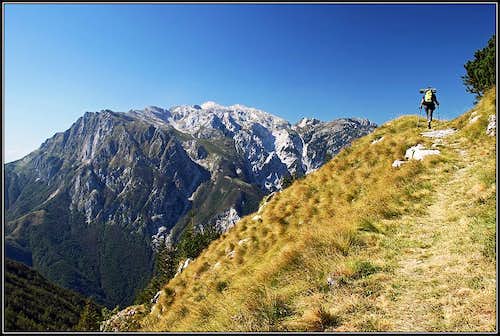 The path is mostly wide and very panoramic

However, on the southern slopes of this range there is a very nice, mostly horizontal path, which can be also highly recommended. It is sunny, running all the time above the deeply cut valleys, very panoramic, and so recommendable for times when due to snow the summit ridges are harder to access. The beauty of those paths is that they all the time go by an old Italian mule track, a masterpiece of military engineering.

There was a big plan of Italian government, in a short period of time when Italy occupied this part of Slovenian territory. They wanted to build a road which would connect Tolmin with the valley of Lepena and further Soča. The road would have to cross the mountains on Prehodci, 1635 m, the lowest part between Bohinj mountains and Krn group. But to achieve that pass from Tolmin, a long detour was planned, because more than 1400 meters of altitude difference could not be gained just directly. Many comfortable mule tracks were existing even before, originating from the World War I. Those were planned to be utilised, but as time lapsed, Italy lost its reign over that territory.

Nowadays, along the whole South Bohinj Range comfortable, mostly broad paths go on medium altitudes. They start on Petrovo Brdo saddle, or even in Sorica village, on the very east of the range and go all the time on a decent altitude. At first on some 1100 meters, connecting high villages above Baška grapa, then on some 1300 meters, and finally they reach altitudes of 1500 meters and at the end 1635 meters on Prehodci pass. The whole trek can be done in two long days, but that is hardly enough. You still need a plan how to return. A much better idea is to continue the trek and do a longer round tour in the Bohinj mountain group, or to continue westwards in the Krn group.

The paths are mostly comfortable, wide (in many places even appropriate for mountain biking) and well marked. On some places, however, there are narrow and a bit exposed passages. The difficulty would normally nowhere exceed T2 on the Swiss Hiking Scale. For the tour you need only the usual hiking equipment: good shoes and poles. Carrying a tent or at least a sleeping bag will make you independent of mountain huts. The western part of the trek (hut to hut) can be done in one day, not taking into account the return.

See the parent page of South Bohinj Range for a more detailed information about all approaches to the range.ž

See the following Google interactive route topo for general information and basic data about route sections. Click on icons to get more information. From the crossing path you can ascend also summits of the main crest. Those trailheads on the crossing route are depicted with the "man" icon.

We start the western part of the trek on Razor alpine meadow, 1316 m. The mule track by which the marked path crosses the slopes, goes from the mountain hut towards the west. The first goal is the slope below Tolminski Migovec and the saddle SW of it, where Kal alpine meadow lies. Soon after we cross the big Razor meadow towards the west, the marked path branches. The crossroads is immediately after the path goes through an interesting passage between two rocks.

a. The upper path, even if marked as "Slovenian Transverzala" - with the No. 1 by the marks, is narrow and on a few places requires quite some attentiveness. At first it ascends by crossing through steep woods a rocky side ridge (nice views from there), then it descends a bit and crosses into the valley which descends from below Vrh nad Škrbino. By that valley we could go also up on the high summits of the crest, but our crossing continues around the valley. Now the path is again broad and comfortable. It ascends gently the slopes of Migovec and is very panoramic. After a section through pine bushes the path reaches grassy slopes. Just before reaching Kal meadow we pass a water source (below the path). Kal means in Slovenian language water pond and that source can be valuable in dry seasons in late summer. Then we reach the picturesque huts on Kal meadow. 1 h 30 min.

b. The lower path is more comfortable, but reaches the slopes below Kal meadow some 200 altitude meters below the saddle.

Kal meadow and the saddle can be reached also directly from Tolminske ravne trailhead, 900 m. We go in the NW direction, as described on this route description: Tolminski Kuk from Kal. (https://www.summitpost.org/tolminski-kuk-from-kal/642354).

On Kal meadow you can also deter up towards the summits. By the just mentioned rout description you can reach Tolminski Migovec and Tolminski Kuk.

The huts on Kal alpine meadow

On Kal saddle broad views towards the west open. A wild ravine is descending deep down to Tolminka valley (more than 1000 meters of altitude), but our path goes comfortably across the slopes, not losing a meter of altitude. Across Tolminka valley there is the whole Krn group seen. From the saddle we go first in the northern direction, at first even slightly ascending. Then the path runs horizontally across the slopes of Migovec and Kuk. All the time it is broad and very comfortable, would be almost appropriate also for mountain biking. The path makes quite a big distance, becomming more and more beautiful. Tolminka valley is very deep below us and there are nice scenes also along the path itself. After the ascent on some 1600 m, the path crosses a few rocky ravines and then starts to descend gently. But it is still quite some distance to Dobrenjščica alpine meadow. After the gentle part of descent, a big loss of altitude follows. Above the meadow the path goes down in many long switchbacks, finally reaching the hut on some 1300 m. 1 h 30 min.

From the described path section, it would be possible to ascend the main ridge, but almost nobody goes over that pathless terrain up.

Dobrenjščica can also be reached from Tolminka valley. From the parking place on some 400 m you have some 3 hours of walk up.

By the rocks of Mahavšček

From Dobrenjščica alpine meadow, 1300 m, we see the continuation of our crossing clearly ahead of us. The well marked path continues across the slopes towards the NW. Soon it enters the area of Mahavšček. Reaching its southern slopes we have an option to deter up and by a quite abandoned military path ascend the main ridge and the summit. But our path of course continues crossing the slopes. Almost all the time it ascends quite comfortably. Where it has to make a more considerable altitude gain, it does so by long, comfortable turns. Mostly the path goes by wonderful, broad ledges. Soon we gain altitude. From Mahavšček some picturesque rock walls and ridges fall down, but the path avoids them. After passing Mahavšček, the path enters into a high mountain forrest, named Smrečje. Soon it ascends above it and continues towards the W-NW. Finally it goes over the main ridge (better plateau edge) south of the valley, called Za Lepočami. Prehodci, the passage, where the path from Tolminka valley comes up, is a bit more towards the west. 1 h 30 min. 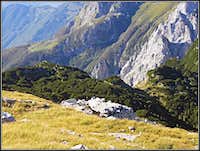 From Prehodci, 1635 m, or the edge east of this pass, we have several options:

> We can descend into the valley of Tolminka (if a car waits us there).

> We can go north on Za Lepočami and there turn eastwards on Bogatinsko sedlo (pass), 1803 m, and further down to Komna plateau and down in Bohinj.

> We can continue the trek towards the SW into Krn group, for example to the hut just below Krn summit.

> We can continue the trek towards the NW to the nearest mountain hut. From Prehodci we follow the marked path to Krn lake and there right to the nearby Dom pri Krnskih jezerih, 1375 m, 45 min. From there you can descend into Lepena valley. 1 h 30 min more.

When To Go On Trek?

In dry seasons, between June and October.