Dead Horse Point is a minor subpeak, really just an outcrop or a feature, located near the southern end of Mt. Wilson. From many perspectives, it hardly stands out at all.  However, it is among the most enjoyable minor peaks of Red Rock Canyon National Conservation Area for a number of reasons:
1. At only about 2 miles from the car to the summit, the route can be a pretty quick one, making it among the few in Red Rock much suitable for summer forays.
2. The route is a fun one, with several spots of Class 3-5 scrambling, and it is not overly brushy (that does not mean it is not brushy at all).
3. White Rock Pinnacle, another outstanding minor peak in RRCNCA, is very close by and easy to pair with this peak.
4. It is possible to continue on and climb Wilson, the highest sandstone peak in RRCNCA.

Go prepared-- the single hardest move on the standard route is described as 5.4.  There traditionally has been a fixed line here that lowers the spot to Class 4, but as the peak lies within a federally designated wilderness area, fixed lines are illegal, and you can't be positive that rangers won't have removed the line.  Do not attempt this route unless you can "scramble" up a 25' 5.4 pitch or unless there is someone in your party who can can offer a belay to others or set a handline.  Likewise, if you can't downclimb something like this or don't feel comfortable doing so, bring a rope (60' to be safe) and other gear for rappelling. 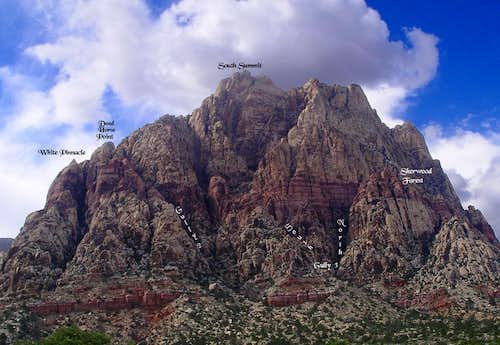 Mt. Wilson and subpeaks
Not far from White Rock Pinnacle's summit is the unofficially titled Dead Horse Point (see picture above).  To reach it, work west from the canyon exit (the canyon ascended via the principal route for the peak) on Class 3 terrain and then soon work slightly north and then back east to reach the summit block of this other subpeak.  Climbing it looks harder than it actually is; it is Class 3 though exposed in places.

On Peakery, DHP has an elevation of 5600'. Please note that the coordinates given on this page are approximate.
Originally, I did not intend to create a separate page for this peak and had included it with the WRP page instead, but after a recent PM conversation with another SP member and considering that each peak has its own register and local name, I decided a separate page wouldn't hurt.

Take Charleston Boulevard (SR 159) west through Summerlin. After the development abruptly ends and the desert begins, drive a few miles and pass the well-marked entrance to the Scenic Drive.

It seems that most people climb these peaks first by ascending White Rock Gully (Class 4-5.4; see attached route page entitled "Standard Route" but refer to the modified directions in the overview). Climbing both WRP and DHP and using this gully for both the ascent and descent is 4-5 miles RT tops and something like 1500-2000' of elevation gain in all.

There are, however, a couple of other options:
Climbers going up one of the gullies can traverse west from the summits and pick up the Hidden Bowl route to the summit of South Wilson and Mount Wilson. 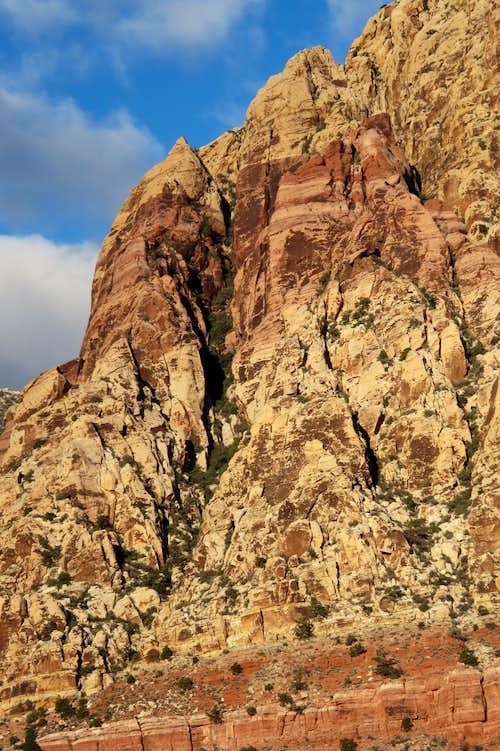 No fees to park or hike here. Because you're right off the highway, exercise caution about parking here when it's dark; break-ins have been a problem at times.

Spring and fall are best. Winter is usually okay, but the canyons and gullies can be icy. Summer is not recommended, but due to the short distance, safe climbs early in the day are feasible for fit parties.