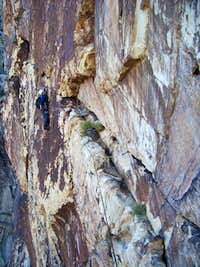 Mount Wilson is the highest peak at Red Rocks and via its outstanding wall features on its northeastern flank, offers up the most significant climbing lines in the park. Aeolian Wall makes up the northeast corner of the mountain and is a 2000’+ steep walled feature bordered on its left by a turreted ridgeline which is in fact Resolution Arête. The routes on Aeolian Wall are the longest technical routes at Red Routes with long approaches and descents in comparison as well. 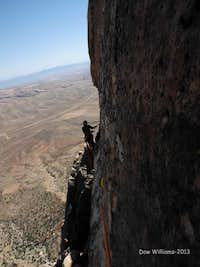 The most infamous of the seven published routes (2009) on Aeolian Wall is Resolution Arête which was put in by Phil Broscovak and Geoff Conley in 1981 and went free by Paul Van Betten and Richard Harrison in 1984. If you are looking for a long alpine style adventure at Red Rocks, this is no doubt one of your, if not your best, choices. Another highly regarded route on Aeolian Wall is Inti Watana which actually tops out into Resolution Arete. The summit of Mount Wilson can be reached by continuing up Resolution Arete or you can rappel Inti Watana via nine double rope rappels. Therefore, Inti Watana also serves as an exit option for Resolution Arete. The most direct line to the summit of Mount Wilson is Woman of Mountain Dreams, a late Urioste addition (1997) that spans 2110’ at fairly sustained 5.9-5.10 climbing.

The approaches for the Aeolian Wall routes will require a certain amount of scrambling before you rope up. Resolution Arete has the lowest start of the seven and thus the most roped pitches. Park at the old Oak Creek camp ground trailhead off of Hwy 159. Follow the Oak Creek road bed all the way to the col between the Wilson Pimple and Mount Wilson. Descend slightly and look for a trail off to your left that runs through the old camp spot. The trail continues through the camp and meanders its way up the hill side towards Mount Wilson. Which route you have planned will determine where you head from there. Approaches take 2-3 hrs. 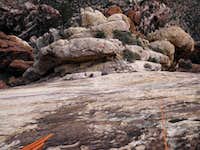 Woman of Mountain Dreams, 5.11a 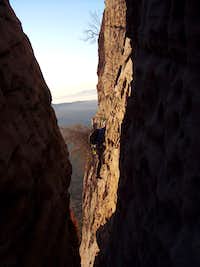 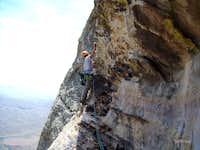 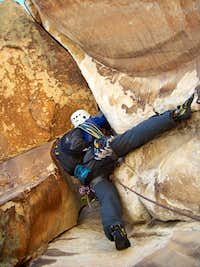 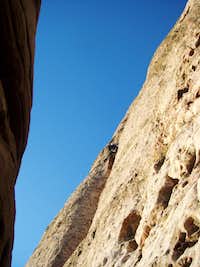 The approach is actually entertaining, particularly in comparison to Lady Wilson’s Cleavage. Some true 4th class scrambling makes it interesting and the actual start of the route offers a spectacular setting up on a high shoulder ledge. The first pitch is full on 5.9 and lets you know immediately how much you will be hating your pack from that point forward. The 5th pitch offers perhaps the most serious route finding of the day on run out terrain but at a reasonable grade, 5.8. The 8th pitch, offers an enjoyable 5.10 roof pull. The 9th pitch is an enjoyable 5.9 pitch that has relatively new (2009) belay gear jammed and left behind for a solid belay below the crux roof. The crux pitch, 10th (5.11d or 5.9+, C1), is nothing in comparison to the 11th pitch , 5.10d, which offers difficult protection for its crux move. The 14th pitch is the most aesthetic of the day, a pumpy and exposed 5.9+ hand traverse. From there, the climbing is rather non-descript with a few more decent pitches left. The route eventually drops you just 50’ below the true summit of Mount Wilson! Dow (Photos)

Inti Watana was put in by Jorge Urioste and Mike Clifford in 1997. Like many of Jorge’s routes, there were more bolts than needed on some of the trad portions of the route. In fact, only one pitch, pitch seven, was pure trad climbing. You can easily, with solid rope management, combine pitches 9-10 and 11-12 to make this a 10 pitch route covering 1300’ versus the published 12 pitches covering 1500’. Many complain of the first pitch, but in reality it is quite clean now and edges fairly solid by Red Rocks standards. I thought the pitch lead smooth and slightly below the grade if anything versus the 5.9+ given in Handren’s guide. The crux pitch is the 2nd pitch and it offers several fantastic 5.10 moves up a thin seam. Pitch seven was nice and long and allowed you to place some of that gear you brought. The most interesting pitch in my opinion, outside of the second pitch, was the combination of pitches 9-10, involving a bold (but big jugs) mantle to start followed by a long 5.9 pitch of steep face climbing. At the very end of the climb, just before topping out on the route (12th pitch), you get another 5.10 move or so. Inti Watana tops out at the top of the 15th pitch of Resolution Arête. You can finish Resolution Arête and walk off of Mount Wilson via First Creek, but most everyone chooses to rap the route and save the summit of Mount Wilson for a more classical experience. Quite a few variations can be done on rappelling the route, depending on your rope length and stretch! We descended via eight double 60m rope raps. Dow (Photos)

Of all of the incredible scenic positioning to be had on the massive Aeolian Wall, this right side is my favorite. Woman of Mountain Dreams is a more pure line than Resolution Arete, in that it runs straight up the face with no large break in the action (i.e. Sherwood Forest on the left side). The route breaks down in several obvious segments. The first three pitches offer uneventful 5.8 climbing up the right side of an attached tower. The 4th pitch is the crux of the climb and the only 5.11 climbing on the route, a bolted face pitch. The 4th through 6th pitches take you to another comfortable ledge. The 7th and 8th pitches are better combined and along with the 9th and 10th pitches reach yet again a comfortable ledge. The 11th pitch lands you at a Pine Tree and is the most run out pitch of the day unless one climbs right and pulls a roof at a harder grade. The 12th pitch moves the line left a little whilst the 13th pitch is perhaps the headiest lead of the day. The 14th and 15th pitches are easy climbing on loose rock. Most who attempt a route of this magnitude would feel comfortable scrambling the final (16th) pitch un-roped. Dow

Gift of the Wind Gods shares its first pitch with Woman of Mountain Dreams, a causal 5.8 romp up a flake behind a large ponderosa tree. The second pitch takes a short traverse right to access a thin seam (5.10a). The third pitch follows a wider crack (5.8) to its terminus. The fourth pitch offers the crux climbing of the day up a thin seam, up and left, which is at times closed for gear therefore a few pieces of fixed pro line the crack. The fifth and sixth pitches can be easily combined for mellow crack climbing (5.9). The seventh pitch is the 5.10 traverse and involves the best rock of the day. The 8th pitch is a pleasant wide crack/off-width pitch (5.9). And the last 200’ (5.7) runs up chossy ground to a flat shoulder on the right side of Mount Wilson’s summit. From there a convoluted scramble takes you to the summit plateau considerably west of the summit. Handren’s guide has this route marked as 1500’, but it is considerably shorter than that. However, you will ascend approximately another 400’ or so via scrambling to reach the summit ridge. Dow