You're not in Kansas Anymore.

A highly striking feature of Death Valley National Park, especially when viewed either from high above or from just inches away, is the long salt pan that covers the floor of Death Valley itself. In the middle of a cloudless day, the glare coming from this white "wasteland" can seem almost blinding, even if one is wearing sunglasses. But with the backdrop of a deep blue sky, in the pink glow of dawn, or in the bluish hues just before dawn or just after sunset, the salt pan here can seem like one of the most beautiful, otherworldly places imaginable.

Otherworldly, indeed. Salt pans here and elsewhere in America have been used for scenes in popular movies such as Star Wars (the original), Independence Day, and Pirates of the Caribbean: At World's End.

The salt pan is certainly no climbing destination, and, as far as physical exertion goes, hiking on it is about as easy as it gets. Nevertheless, it is not a place to take lightly. March through October, daytime highs usually top 90 degrees Fahrenheit. During the summer months, especially July, temperatures above 120 are not uncommon, and there is no shade. Put simply, the salt pan, though easy to hike on, is also easy to die on. Someone wandering out onto the salt pan on a summer day without having adequate water and sun protection could easily perish from dehydration or heat exhaustion.

So take a walk out and explore the fascinating patterns and formations. Break off a piece of crust and taste it-- yes, it's definitely salt. For now, though, please join me for an online tour of the salt pan's history and features...

During the late Pleistocene Epoch, which ended roughly 11,550 years ago, what today is Death Valley was occupied by Lake Manly, a freshwater lake that was about 80 miles long (about the length of today's Death Valley) and up to 800 feet deep. After the last ice age, the climate became warmer and drier, and Lake Manly began to recede through evaporation, leaving behind the bare floor of what would come to be called Death Valley. What had been a relatively cool and moist area became the hottest, driest place in North America. The lake also left behind a massive aquifer that is said to be among the world's largest. The pools at Badwater (more on this spot later) are among the few aboveground signs of this aquifer. 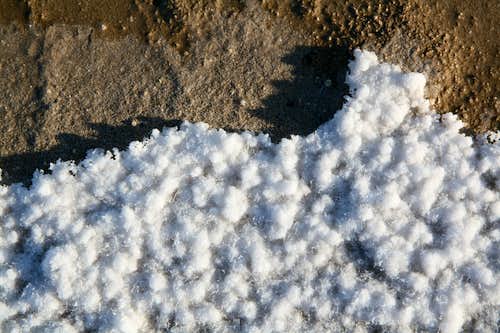 Yet another thing left behind by the evaporating lake was the great salt pan of Death Valley. A salt pan occurs when the water of a vanishing lake evaporates instead of draining into the ground. Dissolved minerals stay (and accumulate as more rain falls and evaporates), and these minerals are usually salts. A salty crust forms, and although the crust is often thick enough and hard enough for walking and even driving, danger can exist; sometimes the salt crust covers a thick layer of mud (during World War 2, such areas in the Sahara served as natural obstacles to travel and played a role in military strategies). Even after a period of rain, a salt pan can become a gooey mess that can suck shoes from feet and trap vehicles (the Death Valley salt pan is closed to vehicular use, although it is not uncommon to find spots where scofflaws have ignored the regulations and put their mechanized fun first). 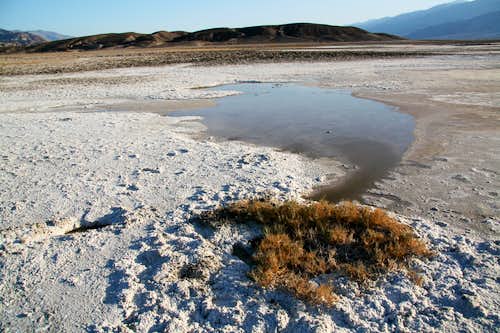 Heavy rains can occasionally bring Lake Manly back to life, though on a smaller scale. The rain falling on the salt pan and the runoff pouring in from nearby canyons pools because it cannot evaporate fast enough. In 2005, such conditions resulted in a temporary lake that covered over 100 square miles and was up to two feet deep. Rangers and some visitors actually were able to canoe across the "lake" while it lasted (see the picture below). 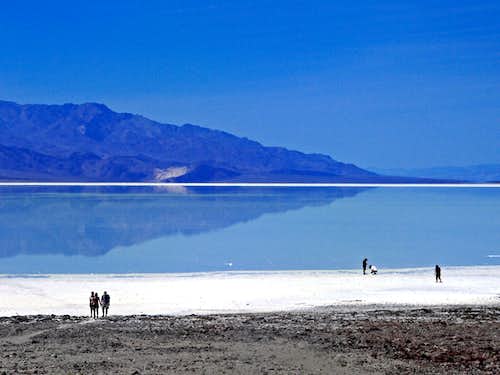 The salt pan is constantly "growing." In addition to the infrequent rains whose evaporation leaves salt behind, more minerals wash down into the valley from the huge alluvial fans connecting the surrounding mountains with the valley. As a result, the salt formations that occur change their size and shape while new ones are created and older ones are eroded away. 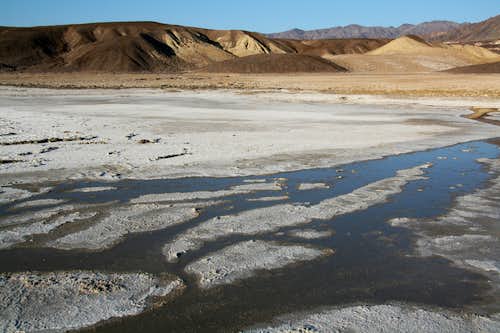 Heat plays a role in the constant reshaping of the salt pan as well. A walk out onto the salt pan in many places will reveal salt ridges, a few inches high at the most, connected in polygon-like patterns, with a flat salt surface in between. The story of these features is one of mud, heat, and salt.

Intense summertime heat causes cracks to form on the surface of the salt pan. Beneath the crust is that mixture of mud and salt described earlier, and moisture evaporates from the newly exposed mud. Salt swells and fills the cracks, building the ridges. There are sections of the salt pan that have these patterns extending seemingly endlessly in all directions.
The ridges and cracks are the features of the salt pan that interest me most, but for many others, the highlight is either Badwater or the Devil's Golf Course. 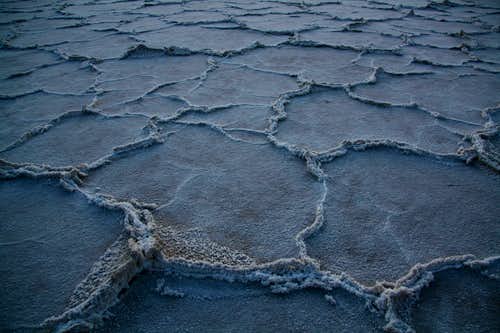 Badwater is the name for a collection of pools at the edge of the salt pan about 18 miles south of furnace creek. The water gets its name from its bitter taste, but it is not poisonous, although it is so salty that drinking it will almost certainly make one sick. The pools are home to some hardy insects and an endemic snail species. Badwater has long been a popular spot with photographers trying to catch the dawn reflection of Telescope Peak, more than 11,300 feet higher than Badwater. Environmental degradation of this sensitive area caused the National Park Service to build railings and a boardwalk restricting access to the pools, and the price of this intervention is that the classic view is now ruined by the presence of man-made objects (some people who consider their photograph to be more important than the ecology here still enter the restricted areas to get their obstruction-free shots). 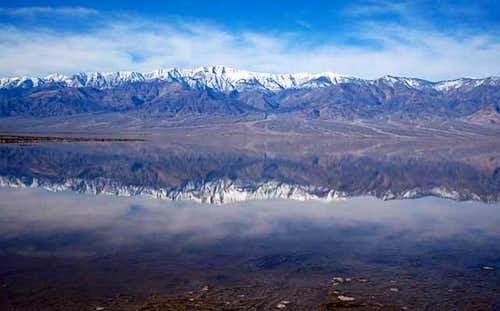 The Devil's Golf Course, a few miles north of Badwater, is an extensive collection of jagged salt-mud pinnacles. It is not the only place on the salt pan where such pinnacles are found, but it seems to be the largest such area and to have the greatest concentration of the pinnacles (unpaved West Side Road also crosses this area, and there are many pinnacles to the north around Mustard Canyon, too). In these spots, much of the valley floor is mud from runoff, but there are enough sodium chloride deposits to create a salty coating as the water evaporates and the mud dries in small pinnacle-like formations.

A visit to one of these clusters of pinnacles leaves no doubt about the name Devil's Golf Course. It would take a special brand of insanity to try walking barefoot or driving among the formations, and even hiking through them in sturdy boots can be tedious and/or dangerous. But the pinnacles are fascinating, more so the closer one gets to them in order to examine the crystals and the different shapes. 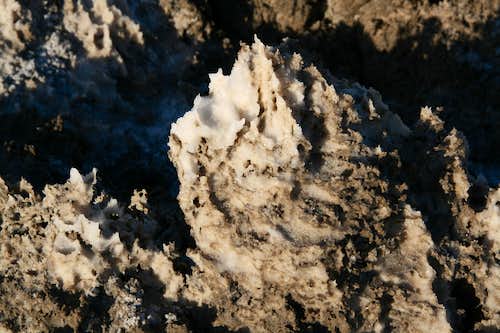 I did refer to some other sources when gathering information for this page, but this is not a cut-and-paste job. Sources I used for help are as follows: 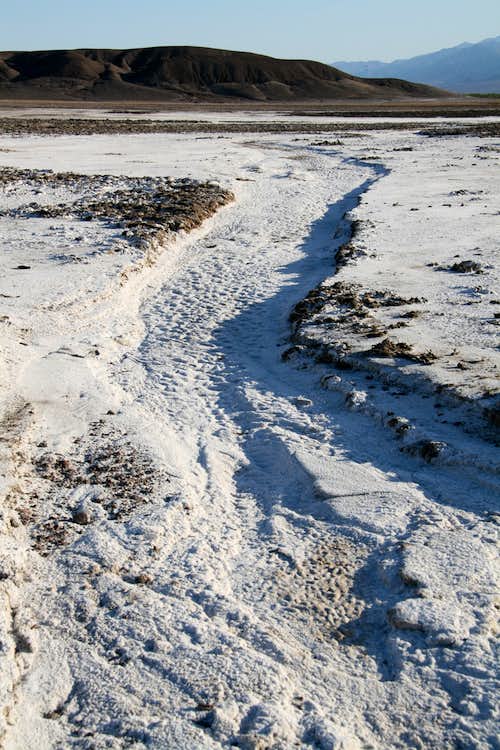 Talk about a place that's hard to miss! The easiest ways to access the salt pan are off the road that runs south from Furnace Creek in Death Valley National Park. Three turnoffs in particular stand out.

The first is for West Side Road, an unpaved but well-maintained road that provides a 40-mile trip through the heart of Death Valley. Along the way are fields of salt pinnacles like those of Devils Golf Course, flat expanses of salt, and salt channels that look like white streams.

The second is at Devils Golf Course, described in more detail in the first section.

The third is at Badwater, 17 miles south of Furnace Creek. In addition to the pools there, there is a wide "salt road" (closed to vehicles) that leads out into the main salt flats after about ten minutes of hiking. Some roadside pullouts just south of Badwater offer even faster access to the salt pan.

A short drive west of Furnace Creek is Mustard Canyon, and there an easily passable dirt road abuts the northern end of the salt pan before winding through a colorful canyon of badlands buttes.

There is an entrance fee of $20 for Death Valley National Park. There is a self-pay kiosk just south of the Dantes View turnoff (off CA 190 east of Zabriskie Point, which is 5 miles east of Furnace Creek). You can also pay at the Furnace Creek Visitor Center. Because there are no entrance stations in Death Valley, it is easy to cheat on paying the fees. Remember, though, that your fees help support your parks. 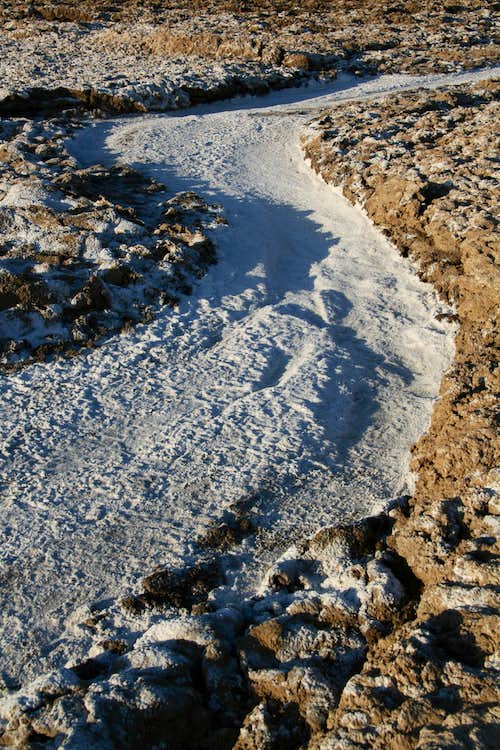 Thanks for putting the Badwater pic on the page.

I also added a shot from spring '05 when the valley was flooded and another from Telescope Peak on a clear day.

Re: Thanks for putting the Badwater pic on the page.

Thanks-- that is an awesome shot. I really wish I could have seen that. Probably, I'll find a place for that on the main page or at least make a link to it where I mention it in the text.