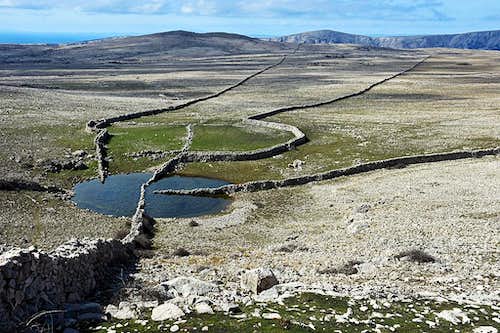 The trip to Diviška summit is something quite special. You will hike through unusual, yet for the Dinaric mountains specific and very beautiful types of landscape: wonderful pine forrests, with their greenery complementing the deep blues of Adriatic sea, a broad, white karstic plateau, criss-crossed with dry stone walls ending only on the horizon and dotted with small green oases of grass, carefully fenced by dry stone walls again. Every one hour of walk, perhaps you will get to a water pond, another precious resource in that karstic desert. The Diviška pond is a wonderful example. It is divided with dry stone walls, coming from all sides, so that sheep herds of different owners don't intermix, when coming to drink. And finally, there are broad views around, over the islands of Kvarner bay and towards the continent, where the Velebit mountain is looming on the horizon.

Diviška is the highest summit in the northeastern streak of mountains, surrounding the valley of Baška, on Krk island. Its summit is only slightly rising above the big plateau, so other summits are as panoramic as Diviška. There's no point of naming all those small elevations. They are easily reachable if someone is hiking along the whole ridge, falling towards the NE to the sea. Perhaps only the summit of Hlam, 461 m, is worth mentioning (there's another Hlam, 482 m, on the other side of the Baška valley). It is closer to Baška, so hikers are ascending it even more often than the more remote Diviška. 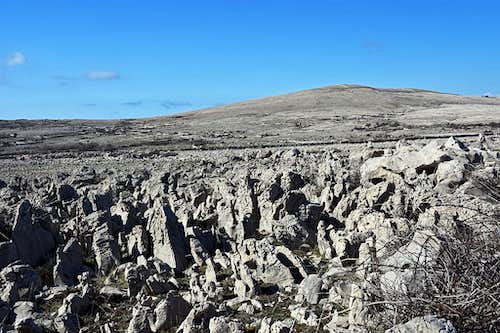 Hlam above the plateau of krk

The plateau is stretching far towards the NW. A rugged broad path is crossing it, offering a very nice option for a shaky mountain bike tour. From the Baška resort, the plateau is gained by two very nice paths, going up comfortably from the Sv. Ivan church. Those slopes are overgrown by beautiful pine woods. Towards the SE, the plateau is lowering towards the coast with a few deeper ravines, one of them, Vrženica, is actually a nice, dry canyon. Its lower part is hosting a beautiful marked route, bringing you down on a wonderful sand beach. Southeast of the very summit of Diviška on the coast there are two nice bays: Vela (Big) luka and Mala (Small) luka. Only a very low isthmus is separating them and both are a wonderful hiking destination. In tourist season, from Baška also boats are driving there, allowing a comfortable return. Both bays are also archeologic sites, above Vela luka in prehistoric times and in antiquity there was the fortified settlement of Corinthia. Finally, the picture of Diviška can not be complete, if we don't mention the Triget canyon (also named: Trget). I haven't visited it, but rare web blogs are describing it as the deepest and narrowest gorge of Croatia. In some places it's width is no more than 2 m and side walls are rising up to the sky, making you feel like being in a cellar. The canyon tour is a rock climb of around UIAA II degree of difficulty. It's mostly done as a descent from Diviška. The reward is a beautiful beach on the coast, but then the majority of visitors return by climbing up again. There are no reports if reaching along the coast the Mala luka bay is possible. Or, you could arrange that someone picks you at the end of the canyon with a boat (or brings you there, and then you start the tour, climbing up).

The most convenient trailhead is the parking place at Sv. Ivan church, just above the Baška, on 134 m. Of course, you can also start the tour down in the centre of Baška. One marked path reaches the plateau also from Jurandvor, the village just NW of Baška.

The steep route on plateau

From the parking place at Sv. Ivan church you continue by a good, broad path, winding gently up through beautiful pine woods. The path is so nicely engineered and ascending so gently, that it is suitable also for mountain bikes. On many places beautiful views are opening down on the bay of Baška.

Getting out of the woods is abrupt. There's a dry stone wall, a gate and on the other side you are - on the Moon. Due to the contrast, the barren, karstic plateau was named by tourists the Moon Plateau. It's almost horizontal, but outside the marked paths still difficult to pass. One major obstacle is the rough karstic terrain, the other one are high dry stone walls, running kilometers and not necessarilly allowing you to climb over them.

The point where the blue path exits the woods, can be reached also by a more direct, steeper green path. It starts below the church of Sv. Ivan, ascends first also through the woods, but then enters a rocky ravine and climbs more steeply up (T2 difficulty).

Now we start crossing the plateau. At first, carefully follow the marks, winding a bit left and right, but then hitting a broad path, almost cart-road and continuing more straightforward. On our left is the broad dome of Hlam, 461 m. Soon we reach the Kalić lokva, a small pond. From there, the marked path ascends on Hlam (15 min), but we continue northwards and in a few minutes reach another crossroads. The biking trail continues straight, while our yellow trail deters right. First it goes northwards, then towards the northeast. The broad path is winding through dry stone walls, in some 15 minutes we reach the place, called Mrgari. The word mrgar denotes a complex of dry stone walls, build in a shape of flower, where sheep were held and separated. They are quite picturesque and can be found on many places.

From Mrgari we continue in the NE direction, then the path crosses a distinct ravine, which is actually the upper part of the Vrženica canyon. On the other side, make sure to keep left, following the yellow marks! The direction changes towards the NW, because the path is going around the broad southern summit ridge of Diviška. It's worth going around, because SW of the summit there's the famous Lokva Diviška - the beautiful pond. The plate on the dry stone wall teaches us about the Kuntrep nature reserve. The whole NE slopes of Diviška are a bird reserve, among others, also big birds of pray are living there and can be often seen. So, from the pond you simply climb up on the panoramic summit.

You best descend by the same route, eventually choosing in the lowest part the alternative route.

There are no restrictions on the ascent route, but the NE slopes of Diviška are a natural reserve, where it's forbidden to enter.

Diviška can be ascended any time of a year, but the best months are usually in spring and autumn. Summer can be very hot there.

All better public maps on the web are sufficient to get oriented (for example the above OpenTopo map), but the most comfortable option is the tourist hiking map, covering the areas of Baška, Punat and Stara Baška. The map is available for free in the Baška tourist center and also on the web. It's advantage are clearly coloured trails, matching the colours of marks on the terrain.