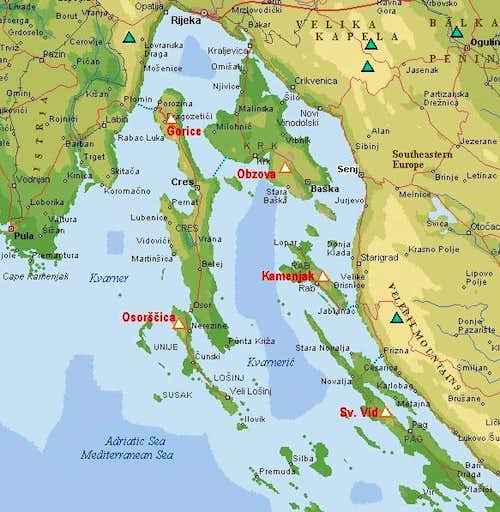 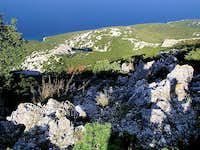 The W slopes of Osoršćica

It is widely known that islands along the Croatian coast in Adriatic see are hilly, actually they are mountains, sunken into the sea. But it would be normal, that the highest mountains would rise closer to the coast, where, for example Velebit rises up to the altitude of 1757 m. Osoršćica is one of exceptions. It rises high, even if it is situated on one of the outer islands of Kvarner. It is really worth undertaking the ascent on Osoršćica, especially if you do the crossing of it. The tour can be done in one day, but if you sleep on the mountain, you can combine the summit ascent with visiting some other interesting places nearby - nice beaches, karst holes or even the climbing area. Sleeping on the summit of such a mountain is an unprecedented experience. The sky playing with all sorts of warm colours, clear, deep blue see all around you with some lonely boats on it and a few lighthouses, guarding difficult passages, karst, rocky terrain, but still covered with colourful pillows of flowers, grass and bushes, respectful high-mountain woods with their serenity, after a pleasant ridge hike a small church of St. Mikul (St. Nikola) just below the summit, what else could you wish!

Like other islands along the Adriatic coast also Osoršćica is built of limestone from cretaceous period. There are no big walls for climbing, but on its western slopes there are some nice crags where the climbing area is arranged. The mountain has its name by the town Osor, which stands - how strange - on the neighbouring Cres island. But between Cres island and Lošinj island, in Osor town, there's only a few meters wide channel (dug already by the Ancient Romans), where the road crosses by a bridge, which, if rotated, allows also ships to pass. And immediately, on the northern side of Lošinj island a 10 km long and 588 m high mountain rises. It's eastern slopes are a bit less steep than the western ones, the summit ridge is quite sharp, but still alowing a comfortable path to cross it. The ridge itself is quite compact, but when crossing it, you can still distinguish a few separate summits. The highest one is Televrina, 588 m, less than 30 minutes south of it there's St. Mikul (St. Nikola), 558 m and there are some others, less important. Besides Osor, the other town where trailheads for Osoršćica start is Nerezine, east of the highest point. Below are just a few masterpieces of Aleksandar Gospić, showing the views on Osoršćica from the distant Velebit mountains: 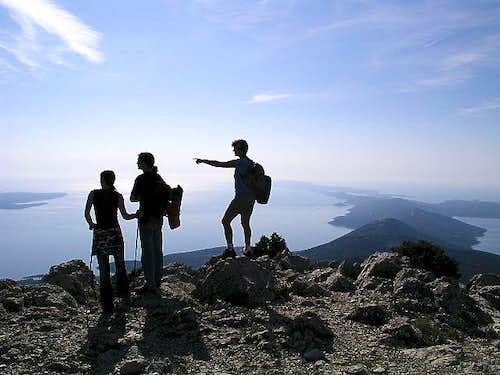 The magnificent view from Sv. Mikula. 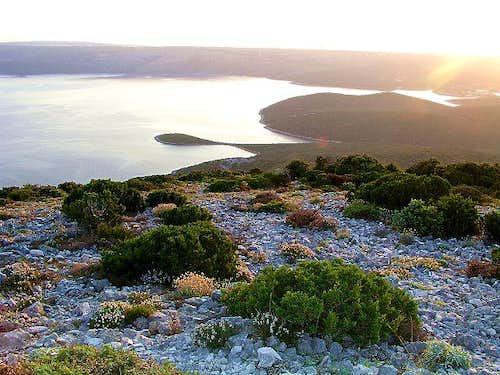 From the N ridge towards the NE

Being situated on Lošinj, one of the outside Kvarner islands, Osoršćica offers a great panorama over the whole area. In a clear day you can see the eastern coast of Istria with Učka, 1394 m, Velebit, 1757 m, islands like Krk, Rab, Pag, down to the outposts of Zadar archipelag, in a very clear day also Triglav, 2864 m in Julian Alps looks close (even if the distance is some 200 km). And vice versa, of course - from all around Kvarner a high cone of Osoršćica is rising out of a blue Adriatic Sea, catching your eye. 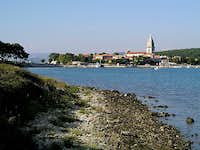 Osor - one of the trailheads 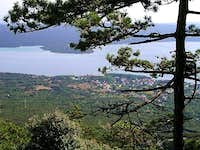 Nerezine - the most popular trailhead

You can reach Cres and Lošinj by car, using one of two regular ferry-boats:

1. Brestova - Porozina (from Istria to Cres) - during summer and early autumn it goes in 1 h intervals, outside this period less frequently,

You can see itineraries of ferryboats here.

There are also long-distance ferry boats, stopping on these islands on their way from Pula (Istria) or Zadar (Dalmacija). The other possibility to travel Kvarner islands is by ship. This way you can reach many towns on Cres or Lošinj islands. The nearest airports are near Rijeka, Pula and Zadar. A small tourist airport is also on Lošinj, SW of Čunski.

The trailheads for Osoršćica ascents along the main road are: Osor, Nerezine and Ćunski. Recently a new road was made from Osor till below the main summit (Televrina). It supports the telecommunication tower, which means two serious destructions of nature on this nice mountain. By this road public traffic is allowed to St. Gaudent hut.

Places To See In the Vicinity

Travelling by Cres and Lošinj islands you can see interesting historic towns, like Cres, Osor, Mali Lošinj, Veli Lošinj, interesting villages, like Lubenice, Beli, Valun, Predošćica, Orlec. On Cres there's a natural phaenomenon - a big fresh water lake Vransko jezero (5.5 km long and 1.5 km wide, its surface is above the sea level, but its bottom is 74 m below the sea level). Both islands are also very developed with tourist facilities of highest quality. Some more information, you can find on: Lošinj island tourist page and elsewhere. On Osoršćica mountain, for hikers and climbers the key places of interest are:

Other nearby places of interest:

It is recorded, that mountaineering tradition started on Lošinj in 1887, when Rudolf Habsburg, the Austro-Hungarian heir to the throne, ascended Osoršćica and boosted tourism on Lošinj island. But we know, of course, that natives were the ones, who explored the mountain far before. Nowadays some 15 km of mountaineering paths are built (and much more for walking and jogging along the coast).

There are no restrictions on the mountain. To reach Krk island (and continue from there with ferry boat), you pay to cross the bridge.

All the year. In any case do choose a clear day, which will offer you good visibility. Nothing can be more valuable! Usually the best visibility is, when bura wind (north wind) blows. Also, you can choose to climb up early in the morning or late in the afternoon, when it's not so hot. By far the best option is to sleep on the summit. Take care not to make fire under any conditions! Woods would be in flames immediately! You can see mountain conditions on: WeatherOnLine.

You can do any tour in a single day. Camping outside touristic destinations is not allowed, but high on the mountain you will have no problems. Again: take care not to make fire under any conditions! Woods would be in flames immediately! On the north ridge of Osoršćica, there's a mountain hut. St. Gaudent hut stands on the altitude of 274 m and can split your ascent in two equal parts. Make sure in Osor if the hut is opened.

If you have information, please add, especially the following: