Pag island and Sveti Vid (349m) from the slopes of Velebit

Towards the summit of Sveti Vid (349m) in late afternoon light

Pag is fifth largest Croatian island. It covers the area of 285km2. Island is very indented so it has longest coastline which measures 270km in length. Pag stretches in NW-SE direction which means it is parallel with Dinaric Alps chain. As a matter of fact Pag is their part but separated from the chain by the sea, in this case by Velebitski Kanal (Velebit Channel). Pag has two main crests which are parallel. Between them is deep Paski Zaljev (Bay of Pag) and valley, south of Pag town. Northern crest in interrupted with the entrance into Pag bay. As the extension of the southern crest on the north is long and quite narrow tip of Pag island. On the south southern crest descends and melts into the wider and lower southern part of the island.

Around 70% of Pag is bare naked rocky land so island has very interesting and attractive look. Most beautiful part of the island is Pag bay which is surrounded by bare naked crests which fall into it steeply, on many places with cliffs and scree. Along the shore of the bay there is 20km of fine rocky or sand beeches. Bay is open with narrow and beautiful passage Paska Vrata (Door of pag) towards Velebit Channel. On the southern end of the bay Pag town is placed.

In the southern part of the island are 3 peninsulas. Over the eastern one Pag is connected to land with Paski Most (Pag bridge). Pag can also be accessed with ferry from Prizna village on the Velebit coast.

Very interesting on Pag are long Suhozid walls (made of pilled rock, meaning Dry Wall). They can stretch for kilometers over the bare rocky land and certainly add to the beauty of the scenery. Most beautiful Suhozid walls are in the area between Kolan and Gajac villages. There are numerous parallel and perpendicular lines. Also interesting is very long suhozid wall which stretches along the southern crest and over the Sveti Vid for kilometers. It prevents the sheep to go to the edge of the NE face of the crest. Lamb is also one of Pag’s specialties. Because of aromatic plants that grow on the island meet has special taste. Same goes for milk of which famous Pag cheese is produced. Pag is also well known because of salt which is produced near Pag town from sea water for over 1000 years. Also famous is handmade Pag lace which is made here for centuries and each one is unique.

People inhabit Pag island for more than 2000 years and probably even more. Especially interesting is Caska, ancient Roman city, which is believed that has sunken into the sea after a powerful earthquake in 4th century and as years passed covered by deep mud. Caska is located in the northern corner of Pag bay. Today there are only few houses in Caska village but it is believed that ancient Caska had 5000 inhabitants while some historians believe there were as many as 30 000. Its secrets haven’t been revealed yet fully. Archaeological explorations from 1964 revealed that Caska had even bigger sewage system than ancient Rome! Also one very important family from Rome and times of Roman Empire had a huge leisure house there. It is not certain if Caska was originally Roman city or it was older. But generally it is believed that Caska is first larger town on Pag island.

New town was built little bit south of where today Pag is. Its name was Pag but today it is called Stari Grad (Old Town). First records of Pag name date from 10th century. Pag was then real town with city walls, shops, churches, squares… Especially interesting is Sveta marija church from 1192. Even today it dominates the old town. In 976 Croatian king Stjepan Drzislav liberated Pag from Byzantium state and gave rule to Croats. One of the most important dates in Pag town history was March 30th 1244 when it got the status of independent royal town from king Bela IV. This allowed Pag to quickly prosper economically. Status was confirmed by Croatian king Ludovik I in 1376. But in 1403 king Ladislav sold Dalmatia to Venice and that didn’t change for few centuries. By mid 15th century danger from Turks was approaching as they reached Zadar town. Because of that citizens of Pag decided to build completely new town on safer location and on May 18th 1443 construction of what today Pag town is began. Urban plans were made in Venice with great participation of famous Croatian sculptor Juraj Dalmatinac. In great procession, in which they carried the cross, citizens of Pag moved to new town on September 18th 1474. For centuries Venice installed the governors of Pag but in late 19th century movement called Croatian Renascence was booming all over of what today Croatia is so in elections of 1882 Croatian parties won and Pag was again governed by a Croat. After the WWI Pag returned to Croatia.

Today Pag is biggest town on the island and its center in every sense. During the summer island is packed with tourists from all over Europe and wider. Here one can find numerous hotels and apartments. It is also worth to mention Novalja, second largest town on the island and strong tourist center and destination. In Novalja, especially on famous nearby Zrce beach in Pag bay, one can find one of best day and night entertainment centers on the Croatian coast.


When to Climb & Hike Advices 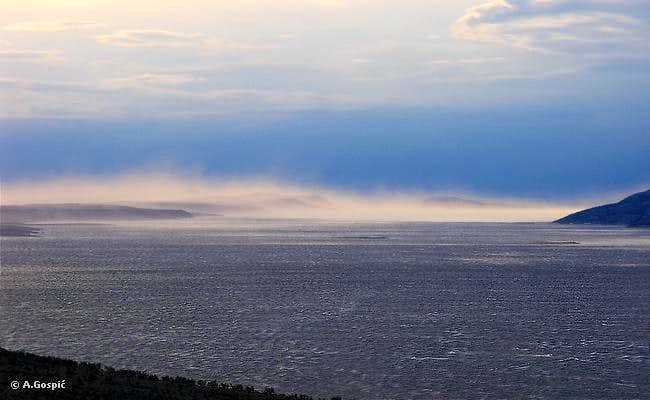 The answer why are the islands below Velebit bare

Sveti Vid is not high and beside that Pag is island on Adriatic Sea which has quite mild climate. Number of sunshine hours per year is huge here so Sveti Vid is pleasant trip in any part of the year but there are always some things one has to have in mind.
~ The only real danger factor is Bura wind which blows down the nearby Velebit massif and reaches hurricane force easily from September till May. Gusts up to and over 200km/h are common thing here. Since there isn’t any kind of shelter on bare rocky slopes, not even a larger boulder, it is dangerous to attempt the climb in such conditions. But to climb when Bura is strong or very strong and reaches lower hurricane force speeds (up to 130km/h) is rewarding and very interesting. During such scenario you get to know closely this amazing wind and observe Bura wind cap on Velebit and clouds of sea spray it lifts from the surface of the sea. In winter temps on Pag also can drop to freezing or bit below, especially when Bura blows. Have in mind that Bura also brings terrible wind chill effect so have a good jacket and glows.
~ It is most beautiful to be on the summit at the time of sunset when Sun colors the bare white slopes of Sveti Vid into orange as it does with Velebit. Don’t forget the lamp then which you’ll need to return.
~ Since Pag is bare rocky it really doesn’t matter during which season you’ll visit. Island is always the same as is the sea which surrounds it. The only real difference is the way Velebit looks. During cold part of the year its lower slopes are grey-brown mix while peaks are under snow and white. From late spring till autumn Velebit is green and in autumn it is red.
~ Sveti Vid is mostly visited during summer season when Pag island is packed with tourists. But that is worst time of the year to visit. Sun is killer on these open rocky slopes then! In summer it is best to climb from Dubrava (Pag bay route) before sunset because steep northern side of Sveti Vid is in the shade then. Start some 1.30h before sunset. That way you’ll have from 20-30mins on the summit before Sun sinks behind horizon on NW.

Trailheads of 3 marked routes are quite apart from one another so can’t be combined if you are with your car. Most attractive is Pag bay route which leads up the steep northern side. If you have to choose among the three this is the one to see. Routes from Kolan and Simuni are not steep and ascent is gradual. Among them I would pick Simuni route because of beautiful western views towards the sea and islands. Also when approaching via any of these two routes view which opens towards Pag bay and Velebit from the summit is complete surprise and thrill.

Center of the island is Pag town. It is located on the southern coat of Pag bay and close to Sveti Vid. As a whole island Pag town can be accessed from two directions: via Pag bridge or by ferry from Prizna village on the coast of Velebit.

By Plane
Zagreb is Croatian air gateway. Find more info about the flights to Zagreb on the official site of Croatia Airlines. From Zagreb you have to take a bus or rent a car.

By Bus
There are few bus lines from Zagreb to Pag daily. Detailed bus timetables from Zagreb you can find on Zagreb bus station site. Pag can also be accessed by bus from Rijeka and Zadar towns. From each town there are several bus lines daily.

Croatian Meteorological and Hydrological Association (DHMZ), alongside already mentioned places on WeatherOnline, also gives current weather data for nearby Rab island. On DHMZ forecast page you can find detailed forecast for current and next day. On DHMZ 7 day forecast page you can see 7 days forecast for various Croatian and world places and cities. Here is also direct link to current weather conditions page for Croatia.

On the pages of Novalja town on Pag island, which is very close to Sveti Vid you can find a page with up to the minute current weather from Novalja automatic weather station page and 5 day forecast. Temp on Sveti Vid is around 2-3°C lower than in Novalja.

On Novalja info pages there is also meteo page with current conditions and forecast.

There are no mountaineering objects on Sveti Vid. Pag is island of tourism so there is plenty of accommodation all over the island. Look for the info on the pages of Pag tourist board, Pag town and Novalja town.

Right on the trailhead of Simuni route is Simuni camp, placed on the coast.

Other Croatian Island Mountains on SP