Ebbetts Peak is a volcanic summit, that can be found just north of Ebbetts Pass next to the Pacific Crest Trail (PCT). Despite being surrounded by higher peaks in the Ebbetts Pass Area, it still offers an outstanding vantage point. While it can be hiked quite easily and quickly from the trailhead, it is best combined with other nearby peaks or as an offshoot from the PCT.

Like most hikes in Ebbetts Pass, the ideal time to hike here is between June and October. 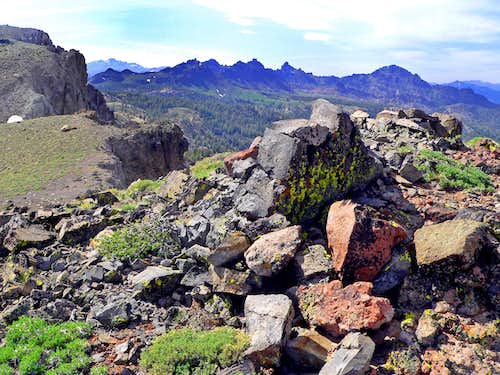 North from "Ebbetts Ridge" south of the pass

From Interstate 99 in Stockton go east on Hwy. 4, 108 miles to Ebbetts Pass, 8,732'. From Hwy. 395 go west on Hwy. 4 over Monitor Pass 25 miles to Ebbetts Pass. To reach the summit, take the trail north by the juniper pine up to the saddle and go east to the obvious peak on the right. A use trail of mildly loose scree goes to the summit.  It is a half mile hike to the summit, gaining 430'.

From the summit, you can drop down to Sherrold Lake and back to the PCT; where you can hike further north up the trail and/or onto other summits like Reynolds Peak 9,679' or Raymond Peak 10,014'. 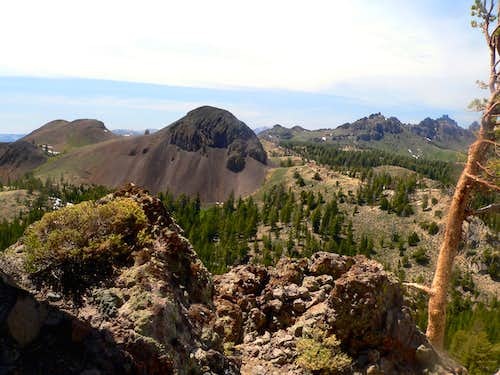 Ebbetts Peak from the south

Ebbetts Pass (8,732-8731'), Peak: Markleeville 15', Ebbetts Pass 7 1/2'
"The Pass was called Ebbetts Pass, in memory of Major Ebbetts, who went over it in the spring of 1851." (Goddard , Report, 90.) It is uncertain whether Ebbetts first saw the pass named after him in 1850 or 1851. The naming took place as a result of the 1853 surveying expedition. Ebbetts was killed in the explosion of the steamer "Secretary" in San Francisco Bay in 1854. (Alta California, April 6, 1854.) The pass was named on Goddard's map of 1857, but the Whitney Survey omitted it from there maps because it was not in use locally. The name was restored by the USGS with the publication of the Markleeville 30' map, 1893. (StNSF) Place Names of the Sierra Nevada, Peter Browning