The Silver Peak-Highland Peak massif. With the two Silver Peak summits on the left and Highland and Peak 10824 on the right.

The twin-summits of Silver Peak are part of a large massif south of Ebbetts Pass in Alpine County, California.  The North summit of Silver Peak is the second highest mountain in the Ebbetts Pass area. Often combined with nearby Highland Peak, all routes to Silver Peak involve steep hiking. Volcanic terrain make this mountain range very steep, with lots of scree, and lots of large rock formations. Fascinating geology can be daunting when climbing up several thousand feet of it!

The shortest route to the twin summits of Silver Peak is from the trailhead for Noble Canyon (depending on the route chosen 6 to 7 miles round trip) while a longer combination route with Highland Peak is possible to complete round trip in 14-17 miles or so, depending on how you go. Another option is to hike from further below up the northeast side, which may be the safest way to go, although it involves at least 4,600’ of elevation gain in 4 ½ miles to the true north summit, and another tough ¼ mile to the south named summit.

Silver Peak is often ignored due to the difficulty in accessing the peak. The steep slopes make any approach long and treacherous. If climbing up Silver Peak’s summits, either in combination with Highland Peak or from another route, be prepared for a long day.

The named south summit of Silver Peak is 10,772’. According to Lists of John the north summit is 10,820’. This is about the same elevation indicated on Google Earth™. I have seen a few peaks like this in the Sierra, and even the Rocky Mountains, where the named summit isn’t the actual high point. In this case, the difference is significant. The two summits are actually about a quarter mile apart. The lower summit has a prominence of approximately 130’ over the higher summit. The higher summit has a prominence of about 800’ above the saddle with Highland Peak and is 48' higher than the lower named summit.

Like Highland Peak, Silver Peak is desert-like in nature; typical of the eastern Sierra Nevada Range. But the dramatic volcanic nature makes it different than other spots that are more gentle in nature, such as Carson Pass or Sonora Pass. There are few lakes in the immediate area, and the ones nearby aren’t very big. Given its location in the northern Sierra, this is one of the higher peaks in the general area, until you go further south towards Sonora Pass.

The mountain has steep slopes on all sides, making it challenging to do in a day. Lots of scrambling is required to reach the summit, but nothing more than easy Class 3.

Views from the summit are pretty stunning with mountains visible on all sides, including the remote sections of the Carson Iceberg Wilderness to the southwest and Sonora Pass to the south.  The Sweetwater Range is seen to the east.  The Nevada Desert is also in view.  Interestingly enough, the Silver Peak-Highland Massif is quite visible from Carson City, and is often viewed by Reno residents when heading over the Mount Rose Highway towards Lake Tahoe just before you reach the forested area.  It is often confused as a mountain nearby.

In a typical year, both Highland and Silver Peak can typically be accessed without too much snow starting in July and going through October.

Silver Peak is accessed from three primary starting points, all along Highway 4. If just doing Silver Peak, there is a straightforward way from a meadow well below it. There is turn off past a building at coordinates 38.612500, -119.7587. This is over 9 miles before you get to Ebbetts Pass if approaching from the east. Then there is the Noble Canyon Trailhead and then Ebbetts Pass. The Noble Canyon Trailhead is located off the fourth horseshoe turn on Highway 4 approaching Ebbetts Pass from the east, and a little under 1 ½ miles past the entrance to the Silver Creek Campground if coming from the east. There isn’t much parking. It is 5 miles from Ebbetts Pass. If coming from Stockton it is approximately 115 miles straight east on Highway 4 to Ebbetts Pass, and 120 miles to Noble Canyon, then another 4+ miles to the easternmost approach. From the Reno-Sparks area, you’ll need to head to Minden and take Highway 88 south until you reach the junction with Highway 89 South and then until you reach the Highway 4 junction heading west towards Ebbetts Pass.

The northeast ridge route starts at about 6,350’. A small road quickly leads up to a gully. Head up the gully and continue up the ridge on the left. Stay on this until you reach a protruding bump at about 7,420’. Descend slightly into the woods, continuing south, and you reach an open plateau that continues to the east and ascends the north ridge of Silver Peak, reaching the north summit first.

The Noble Canyon Trailhead starts at about 7,270’. After a little more than a quarter mile on the trail, head left towards Silver Peak. There is a slight drop in elevation, but head towards the east rib heading directly towards the south summit. This is very steep, and likely too much so for any real comfort, so if you want to be safer may want to drop into the gully adjacent, and find your way to the ridge just to the right. Head steeply up to the ridge below the south summit at about 10,280’, and climb almost another 500’ to the south summit. You can then hit the higher north summit and return the way you came. All told it is 6-7 miles round trip depending on your route. The elevation gain to reach both summits is about 3,700’. But be warned, this is excessively steep, with lots of loose scree. 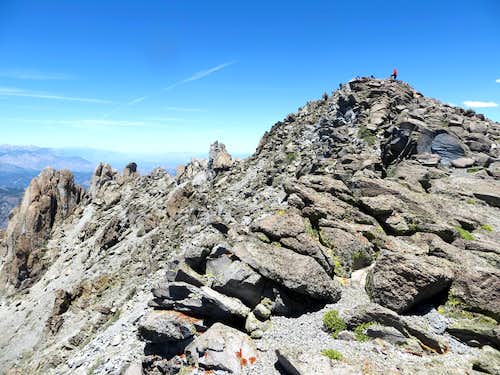 Almost at the North summit

If climbing Silver Peak from Ebbetts Pass, the standard route would be to combine with Highland Peak via the PCT to Noble Lake, and then up to Highland Peak. There are scree slopes from this route up to Silver Peak that could allow you to cut distance; but all of them are treacherous and require you bushwhack through the forest below to reach them.  Therefore, if you want to combine Highland and Silver Peak, the longer route is the best way, and is very scenic as well. Take the PCT to Noble Lake. You don’t have to go all the way to the lake. You can cut up towards the ridge below Highland's south peak at 10,824' before you reach Noble Lake. Continue up to the ridge, basically hugging the rocky slope on the right side of the saddle. Heading straight up in the middle is steeper and often has snow. Once at the saddle, head steeply up towards the south peak, being careful to stay right of the rocky cliffs. A use trail shows the way, although it is hard to follow sometimes. Once nearly at the summit of the south peak a difficult descent heads down to the base of Highland Peak. Now nearly 6 ½ miles in at the summit of Highland Peak, a treacherous descent heads to the saddle between it and Silver Peak’s twin summits. This ridge between them is no easy walk. A lot of ups and downs are required if there is snow. The less snow, the less hazardous, because you can stay to the right off the top of the ridge. The south summit of Silver Peak is a steep, but fun, Class 2 scramble, with some Class 3 moves that are hard to avoid. The south summit is a number of bumps. There is then a very steep, but short descent to the saddle to the north summit – the true summit. Hug the right side to avoid heading straight down to the saddle. Then it is a relatively simple walk to the north summit. 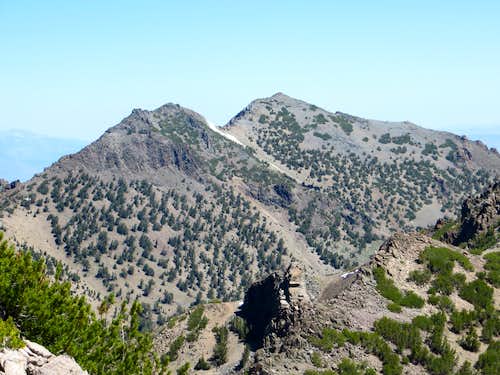 Silver Peak summits from the descent from Highland Peak

On the way back, probably just head the steep way up to the south summit. Then head straight back down to the saddle.  If you don't want to climb back over Highland Peak, you can descend down to Noble Canyon to the saddle via a rib and skate down the scree, but be warned there is thick brush awaiting you. There are a couple ribs to take down to avoid climbing back over Highland (a nearly 17 mile round trip day). Bring a GPS as getting back up to the PCT is very tough, adding up to 1,000’ of additional gain. It is feasible to do the entire loop in 13 miles if perfectly mapped out but this is not always so easy.  The route is tricky and needs to be carefully assessed.  If you want to be safe, head down the rib on the left closer to Highland that descends from the ridge between Highland and Silver, and then head left towards the upper Noble Canyon. This is still at least 5,000’ of total gain for the day.

During the summer season there is no red tape.  Highway 4 is closed at 7,000' during winter and spring months when there is lots of snow.  There are no fees for the three day hiking routes described above. Camping is allowed in the Carson - Iceberg Wilderness with the proper permits. A good camping spot is the Silver Creek Campground. It needs to be reserved in advance. It is reached just east of the Noble Canyon Trailhead. Be careful driving to Ebbetts Pass from the east due to the tight turns and the narrow road. Ebbetts Pass is closed to vehicle traffic usually the second weekend (Saturday) in July for 4-5 hours (morning/early afternoon) for the Markleeville Death Ride. The next one is July 11, 2015.  Climbers looking at that time frame should double check the Death Ride website: http://www.deathride.com/