International winter expedition to Mount Elbrus started in early March of this year. 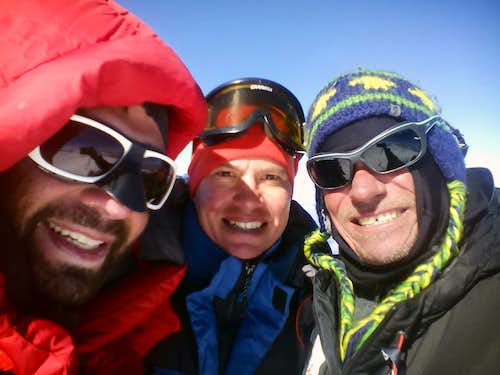 All are alive and well, no frostbite, though we met wind 70 km/h and frost below 40Cº. Ivan Braun became the first Dane, Nadav Ben Yehuda became the first Israeli
to climb the Elbrus in winter (winter ascent considered committed from December 21 to March 21).

But this article is not about mountaineering, although it is present in it.

It follows the adventures in the mountains three guys from different parts of the world, which in the course of the expedition not only met, but were able to find a common language, to make a joint ascent, and to become a good team and good friends. We has not deterred nor political differences between their countries, nor language barriers, nor the difference in mentality. 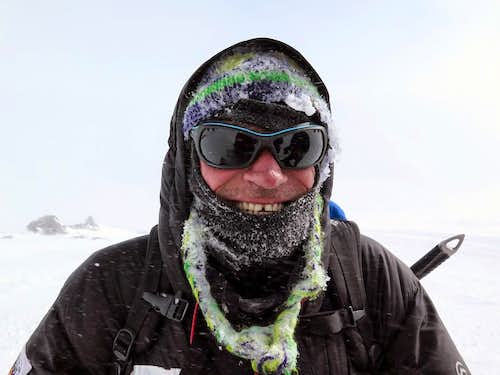 For a Danish citizen mountaineering unnatural. Denmark - an island nation, plains, not hills, not rocks or mountains. Only sea, a lot of fishermen, ships and boats. More surprising finding Dane in the mountains. In addition, on Elbrus - the highest point of Europe, besides winter. But the descendants of the Vikings - northern people, accustomed to winter and can endure a lot, including the cold, wind and toilets Asian type with a hole in the floor. 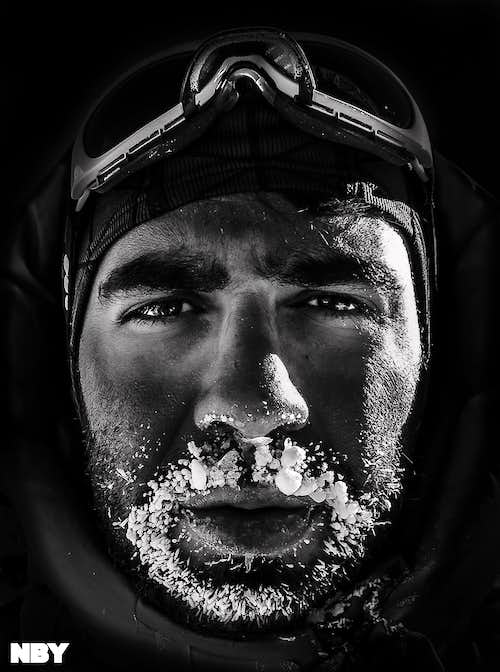 Jews - the people traveling, apparently historically since the time of Moses. Like to walk in the desert, travel, live in different countries. They like mountaneering - may be go to summit for talk with the God, but never like cold, especially in winter ascent. 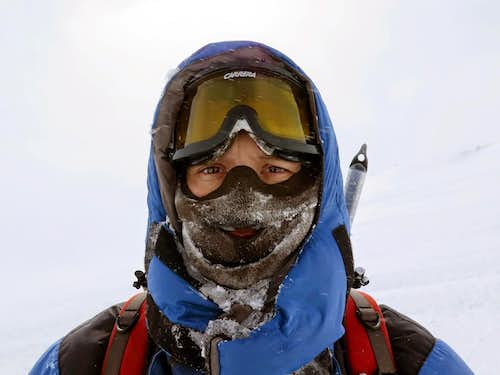 For ordinary Russians in the world there are only three mountains - Mount Elbrus, Everest and the top with which all history is rolling down our economics. I think I had the easiest in this journey. I understand the language, tradition and others. Including: expletives, drunken joy and garbage around.

I did not surprise around me, all my surprise was concentrated within our motley group.

The difference cuisines, languages and mentalities are constantly forced to wonder. Differences between us was so much that it is easier to say what they were not. As it turned out, there is one point of contact between so many different people - this climb. Opinion at what they should be. What is acceptable in the mountains, and that in any way and should never be tolerated. Nadav - this is the Israeli climber who 2 years ago turned down three hundred meters from the summit of Everest for help climber from Turkey. Many remember climbers at that season on Everest? I do not know. But this Israeli guy and his act remembered.

Ivan freeze your fingers, helping to descend from the summit of Cho Oyu another climber.

They did not thinking, it is possible to do otherwise.

I've also participate in the rescue operations and I feel respect for my partners and I understand that, despite our differences, there is much in common between us.

The most amazing moments of this little expedition - flash in my memory:

Midnight, the airport Mineral Waters. The first meeting. Familiarity. Smiled - the difference in growth. Ivan - the short and stocky. I am in next with its 187 cm, but even I have respect unto Nadav upwards. Ladder, "three bears" - flashed through my mind. Three hours later, after I saw our room in the hotel  in city Terskol, this little thought strengthened. 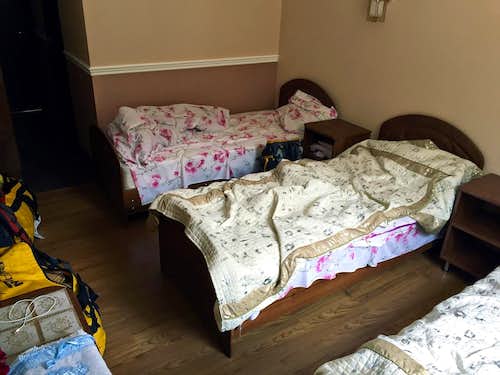 I just dived headlong into a russian fairy tale "Three bears". Standing in the middle of the room, I start to laugh and in response to the puzzled looks teammates i try to explain in English are the Russian fairy tale. Manages to convey meaning with great difficulty, because for all of us Anglo-Saxons language is non-native. From the beginning, all almost turned to booze because of the similarity of words beer (beer) and bear (bear) ...

The Evening. Mountain hut at 3800 m. At my teammates - first date with Asian-type toilet.

Everything is surprisingly went well, the guys were accustomed to this. They had been  in Asia and Africa and I sighed quietly - all ok! Once I relaxed, my friends immediately remembered the extreme rating of toilets in the world, compiled by National Geographic. It turns out, the first place in this ranking is a toilet in
Mountain Hut "Priut-11"! It is not far. In this toilet  a piece of paper that was thrown down, take a reverse thrust and fly back and glued to the ceiling. I was bombarded with questions. With a sigh, I admit that the object of cultural heritage is familiar to me and I promise to show it. 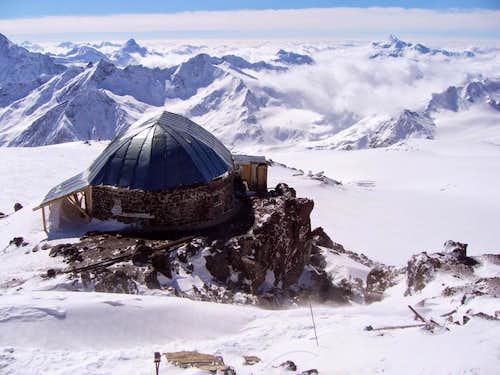 It turns out that we have for four photocameras and three  videocameras! As a result, the process of acclimatization occurs very slowly and even as something fun. We posing for photos and videos. Many jokes, discussing views on climbing, we have the first professional opinion about each other. Surprised that guys are climbing quite differently than I and my compatriots. For many russian climber, the expedition - it is a war, summit ascent is a battle. For my partners it is recreation, entertainment. It's FUN. 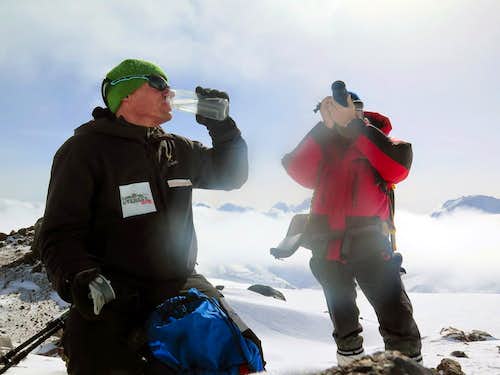 Mountain Hut at 3800 m. This day i remembered watching the meet of my comrades with rusian sublimate food. They had eat traditional food in Terskol. They had quite the taste, especially the barbecue. But now, in the mountain hut they test instant noodles and porridge. They very reacted warily, but ate.

Powdered mashed potatoes caused a sharp rejection of imported stomachs, and the usual condensed milk inspired unfeigned horror. They even try it flatly refused. The reason was the memories of tasting Kumys (traditional asian drink) while climbing in Kyrgyzstan. Apparently, something terrible happened then, even if now my companions refused to eat any Russian dairy products. I have explained, and argued that Russia - not Kyrgyzstan, and that the condensed
milk - no Kumys, nothing helped. As a result, guys never tasted Russian strategic product! Russian condensed milk is very tasty, it is dessert.

Bad weather, mountain hut at 3800 m. From idleness begins active communication on abstract themes, is the interpenetration of cultures. First in the queue becomes language. I actively give lessons of Russian expletives. We compare the number of familiar expletives. I can proudly say, the Russian language - the most
powerful language in the world!

Despite the very bad weather, we attempt to go to the top. We think: may be Internet forecast is not right, lying? The forecast was right, and we come back from 5300 m. 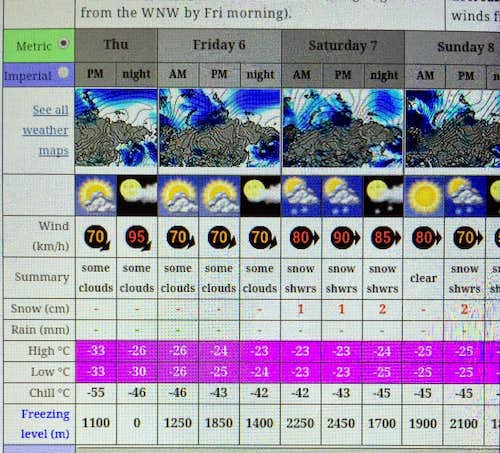 At this day i surprised viability my teammates. Despite a relaxed attitude to the expedition, when we getting into the very bad situation (-40-50 C and blizzard) on the saddle (5300) and know about disgusting forecast for the next few days, no one wants to stop this entertainment ... Nobody thinks retreat.

Bad weather. Blizzard. Interpenetration of cultures is still active. Since the food are coming to an end, there is an active discussion of the traditional cuisine
of our countries. We tell who likes what to eat and in what quantities.

I am waiting when we start  discussion of the opposite sex, ... Political issues we bypass per kilometer. By the end of expectations Nadav offers to sing "The Internationale".

We have climbed to the western summit. Best weather, only - 20 Cº and not wind. We have a lot of pictures and positive emotions. Everyone is happy. Ivan almost jumping for joy, Nadav tired and he want to go down, but all together want eat barbecue and drink beer. Still, out of food left only mashed potatoes (they do not eat) and sugar. Even tea and oatmeal is end. Of course, at a general party meeting decided to throw down today. I was surprised because my friends so well
patience up to the top and became so impatient after. 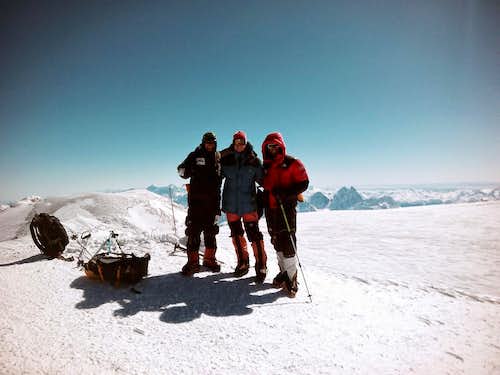 On this day, we first time touched the policy. Constrained by the whole expedition, and when it came to an end, suddenly burst. I will not discuss it now. Not the
place. I can only say that I am surprise my friends. I say that nobody not on knees. All results of sanctions it is all just Western propaganda.

We parted in the late evening, guys night drive to the airport Mineralnye Vody. They got into a taxi and drive in the long distance, and I sighed quietly. But after 30
minutes, i got SMS: Help! We are in the taxi, driver is falling a sleep. And so on, but that's another story. (The Adventures of my friends in Russia continued for another next day).

As a result, I can say that we are all, of course, different. We have a lot of differences, but it does not make us enemies. We can very well go together in the mountains. We understand and respect each other. We can be a friends. I am and my companions became good friends! We became a team! 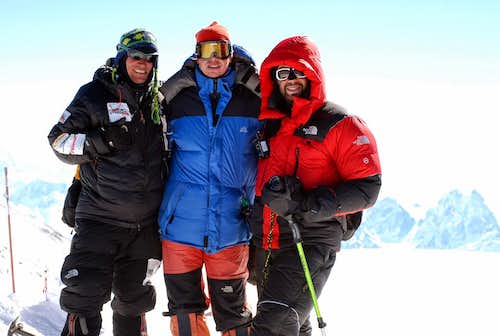 If you need information about Elbrus (route, hotels, transfers, traditional caucasus foods and over) write me. I can help you...

If you you need help in Kyrgyzstan expedition on mount Khan-Tengri, Lenin peak or others, write me...