From Seattle and Portland: Get onto State Route 410. Stay on Route 410 to the park boundary and arch, 31 miles east of Enumclaw. Continue 5 miles to the White River-Sunrise turnoff, where you'll go right. The White River Ranger Station and and entrance booth is 1 mile down the road. 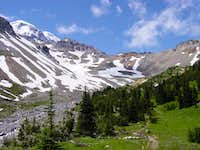 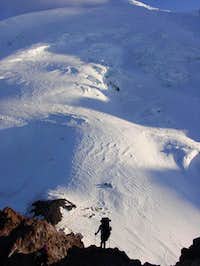 After checking in at the Ranger Station, park your vehicle and start from White River Campground (4,400 feet). Follow the well-marked trail for 3.3 miles through the subalpine forest towards Glacier Basin Campground (6,000 feet).

From Glacier Basin Campground follow the social climber's trail and head up the moraine towards the snout of the InterGlacier (6,800 feet). St. Elmo's Pass (with access to the Lower Curtis Ridge routes) is to the climber's right. The "IG" is a small glacier with a few crevasses. Rope up as conditions require. The InterGlacier is known for rockfall when summer heat or rains loosen the rocks from the "Wedge". Keep an eye out if you're ascending/descending late in the day or in rainy conditions. Head to the top of this glacier, then skirt left around it's flank towards a rocky area where the formerly popular Camp Curtis (9,000 feet) is located. A few small campsites are present. From here descend onto the massive Emmons Glacier. This view is incredible. Head up across the glacier, avoiding large crevasses towards Camp Schurman.

Late season climbers (August - September) may find difficulty accessing the lower Emmons from Camp Curtis. If this is the case ascend from Camp Curtis to the top of Steamboat Prow. Downclimb the most feasible gully available. These very loose rock chutes bottom out a short distance north of Camp Schurman. Exercise caution on this downclimb.

There are many spots at Camp Schurman (9,460 feet). To get above the fray or stage higher up, you may also camp at Emmons Flats (9,800 feet). If staying at Schurman, try to determine the leeward side of the camp. More than likely, it is the side closest to Little Tahoma. Otherwise, prepare to get battered by high winds during the night. A windstorm may be occuring on the NW side of the camp while the other side (only a few yards away) is quiet and calm. Next to the Ranger Hut is an over-used solar toilet. Sanitation is a problem - especially in the late season. At Schurman, climbers have access to black collection barrels for depositing human waste in "blue bags". At the time of this writing there are no collection barrels at Emmons Flats. You'll have to deposit waste on the return trip.

For the uninitiated mountaineer, staying at Camp Schurman can be somewhat humbling. Little Tahoma's daunting North Face (Class 5, Grade V) randomly discharges rocks down the lower Emmons. From Schurman you may see large truck-sized blocks of ice tumble off the Russell Cliffs or hear the rumbling of the Winthrop Glacier Icefalls. If this is your first time camping on a glacier, chances are you will get a quite a show. 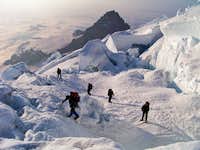 Standard Route
Immediately upon embarking from high camp, longitudinal crevasses formed by the Prow's splitting of the Emmons and the Winthrop Glaciers are the most prevalent hazard. Traverse up and left to approximately 10,000 feet and gain access to "The Corridor". This is a smooth, wide tract (approximately 30 degrees) that ascends towards the summit. This aspect of the climb ends at approximately 11,200 feet. Upon exiting the corridor, traverse to the right on 35-40 degree slopes and skirt the summit cap. A jumble of crevasses may slow progress. The bergschrund may cause problems above 13,000 feet - especially in the late season where it may force a long traverse across the upper Winthrop Glacier to the Liberty Saddle. Once the bergschrund is negotiated, the slope angle decreases and the summit plateau is visible. Ascend to Columbia Crest. Descend the route.

Winthrop Glacier Variation
A more adventurous and less-often traveled variation starts out by traversing to the climber's right (west-northwest) from high camp, then angling toward the Russell Cliffs to descend below the Winthrop Icefalls. Move quickly under this intimidating objective hazard and regain elevation on the far side to access the "Shoulder". Sometimes this may involve a short ~60 degree ice pitch (bring ice screws and/or pickets). The "Shoulder" is another smooth elevated tract (30-35 degrees) that tapers off as the route draws even with the cirque above Russell Cliffs. Keeping this cirque to the climbing right, test your routefinding skills as you ascend through crevasses and negotiate the bergschrund to gain the summit plateau. Ascend to the crater rim and on to Columbia Crest. Descend the route or consider descending the standard route to avoid re-crossing the icefalls that are prone to release late in the day. An early start is prudent for this effort. 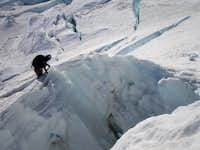 Recommended additions include:
- Wands (If used, please remove these upon descent. Make sure they are marked for easy identification)
- Second ice tool (this should be a hammer for pickets, stakes, and to use as "deadman")
- Ice screws

Most mountaineering texts have comprehensive packing lists. Consult the MRNP Recommended Climbing Equipment List and Freedom of the Hills for more information. 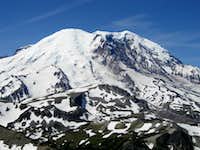 The Emmons-Winthrop is a viable route most of the year. The recommended climbing timeframe is Mid-May to September. Early in the season the approach is covered with melting winter snowpack. This makes for fairly extensive slogging and occasional routefinding challenges. Skis or snowshoes may help in this regard. Check with the rangers on trail conditions and marking to avoid unneccessary bushwhacking. Seasonal storms and conditions may create treefall and other obstacles along the trail. Account for this possibility when timing your approach. The two glaciers predictably evolve with the seasons. The crevasses are bridged and relatively straightforward early in the season, but avalanche conditions may prevail. Glacial acceleration and melting snowpack create initial routefinding challenges by the mid-summer. The bergschrund above 13,000 feet starts becoming more of a factor at that critcal elevation. Late summer intensifies the challenges by adding icy pitches high on the slope. By early fall, the icy glacier skeleton and its crevasses are evident, making a long climb even longer. Fall snows make the glacier extremely dangerous by covering the bare crevasses with weak and unconsolidated snowbridges. It is best to avoid climbing the mountain during this time.

Because of the route's location on the east side of Rainier, the weather seems to change suddenly and without warning. This is primarily due to the fact that weather systems close-in quickly from the other side of the mountain. A system that can be seen for miles from the southern or western side of Rainier will give east side climbers no warning at all. Study weather forecasts carefully before going to the entering MRNP. As you climb, keep an eye out on clouds and the speed they pass over the summit. Rapid barometric pressure drops not associated with altitude gain may indicate an approaching storm. Be prepared to retreat when the weather starts turning for the worse.

If the planned descent backtracks the ascent route, climbing parties should mark their route with personalized wands. Relying on other climbing party wands is a risky endeavor; considering they may be outdated, irrelevant, or gone by the time you start your descent. Emplacing your own wands on the ascent makes a return trip in foul weather less problematic. Remember to collect your wands (and only yours) on the way back. 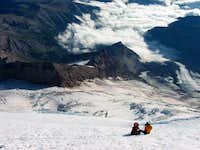 This is the least technical route on the mountain. Despite this, the combination of length, altitude gain, crevasse hazard, and icy slope conditions make the Emmons-Winthrop route challenging - even under the best circumstances. Because of its popularity, climbing team traffic jams regularly occur upon embarking from the high camp area (especially on the weekends). These jams thin out as parties gain the higher reaches of the glacier.

As indicated above, sanitation is a compelling problem on the Emmons-Winthrop Glacier. It is not uncommon to encounter human feces on the route. Climbing parties should exercise "Leave No Trace" measures in this regard. Blue bags are readily available for climbing parties to utilize. Climbers need to be familiar with proper waste disposal procedures before they get to the mountain.

Many (if not most) climbing efforts on the Emmons-Winthrop are unguided and inexperienced. As a result the E-W has its share of MRNP Search and Rescue incidents - most of which involve injuries or fatalities on crevasse falls. The factors center around tired climbers descending on icy slopes without utilizing proper belaying techniques. While not a committing route, it is long and physically demanding - more so than the DC in many climbers' opinions. Physical fitness is extremely important ANYWHERE on Mount Rainier. The Emmons-Winthrop Glacier is no exception. 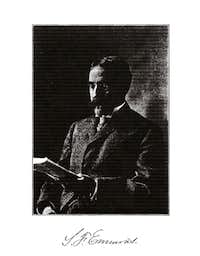 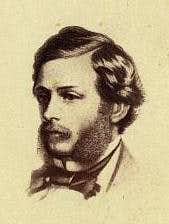 The Emmons-Winthrop is believed to have been ascended as early as 1855 by a two railroad surveyors. Little is known of this event. Accurate descriptions of the summit features from this effort suggest the two surveyors were successful. If this was the case, it could be arguably one of the earliest alpine epic feats in North American mountaineering history. In any event, this ascent is not recognized as the first official successful summit of Mt. Rainier.

The first official ascent of the route was by a party from Snohomish on August 20, 1884. Reverend J. Warner Fobes, George James, and Richard O. Wells hiked from the town of Wilkeson and ascended the Winthrop Glacier from the Lower Curtis Ridge. Source: Cascade Alpine Guide - Climbing and High Routes: Stevens Pass to Rainy Pass, by Fred W. Beckey

Twenty-two year old Delmar Fadden can be described as an earlier version of Chris McCandless (Into the Wild). He was a restless soul known for solo treks through the rugged wilderness of Washington's Olympic Range and the Cascades. In January of 1936 - without notifying park rangers - Delmar set off for Steamboat Prow. He told his family he would be hiking and skiing in Glacier Basin. His twin brother, Donald, alerted the park authorities when Delmar was four days overdue on his return home. After an extended winter trek from White River Camp to Steamboat Prow, Delmar Fadden set off up the Emmons in harsh conditions. He was successful in reaching Columbia Crest. During the descent one of his crampons broke; resulting in a serious fall rendering him unconscious as he slid down the glacier. He was reported to have died of exposure while unconscious and face down in the snow at 13,000 feet. Fadden's solidly frozen body was spotted five days later by a search plane. A rescue party led by Park Ranger Bill Butler and Liberty Ridge pioneer Ome Daiber recovered Fadden's remains. All the members of the heroic recovery effort suffered from exposure and varying degrees of frostbite. This tragedy is considered the first winter ascent of the Emmons - Winthrop route. Source: The Challenge of Rainier, by Dee Molenaar

The Emmons Glacier was named after Samuel Franklin Emmons (1841-1911) - a notable geologist - after he conducted a major survey of Rainier in 1870. On October 17, 1870 Emmons made the second successful ascent of the mountain via the Gibraltar Route; two months after the Stevens and Van Trump first ascent. The Winthrop Glacier was named in honor of Theodore Winthrop (1828-1861), an ardent abolitionist and perhaps the first Union soldier killed in action during the American Civil War at the Battle of Big Bethel, June 10th, 1861. Big Bethel - while small in comparison to the major battles of the Civil War - is considered the first "pitched combat" of the war.