Even though a huge majority of people climbing Rainier do not know or care about the existence of Liberty Ridge, it is considered to be the best climb on the mountain by many. Splitting the North Face in half, this striking line begs to be climbed. First climbed by Ome Daiber, Arnie Campbell and Jim Burrow in 1935, this route features an approach over several glaciers including the intimidating Carbon Glacier. The view of Willis Wall on the left and Liberty Wall on the right releasing avalanches (daily occurrence on warm summer days), unpredictable Pacific North West weather, and exposed climbing on steep slopes provides a variety of challenges for those who decide to give this route a shot. The above mentioned qualities led Steve Roper and Allen Steck to include this climb into their book- "Fifty Classic Climbs of North America."

The difficulty of the climb will depend on your chosen variation of the approach, climbing route, season when you climb, luck with the weather/temperatures and thus the route is suitable to experienced climbers. Technical difficulty of this climb is not very hard by today's standards, yet it is one of the more sustained and steep popular climbs on the mountain and shouldn't be underestimated. Rescues and deaths on this route happen yearly.

Disclaimer: This page is not written to provide a description of a route one MUST follow. The route finding on the approach and ridge is up to the climbing individuals. This page is here to provide one with information required to be prepared for the challenges of the route, and know major features.

The approach starts from White River campground (4,400 ft). Stop by the Ranger station to pick up your permit, wag bags, and find out if there are any updates about condition of the route. Rangers usually have the current weather forecast available as well.
Start hiking up the trail, which may have frequent patches of snow in the early season. The approach through the meadows is enjoyable and you end up hiking by several streams, and small waterfalls. For approximately first 3.6 miles this is the same approach used to approach Emmons Glacier. After about 3 miles you will cross the river, and in another 0.6 or so you will have to hike over St. Elmo's pass (7,500 ft). 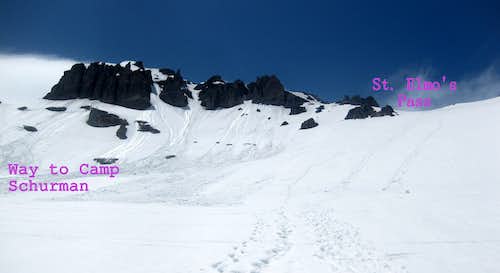 Rope up here and traverse the Winthrop glacier towards Curtis Ridge. Make sure not to gain too much elevation, because you will end up too high on Curtis Ridge.
On their first day, most of the parties camp near or on Curtis Ridge. Flat spots for camping are available here. 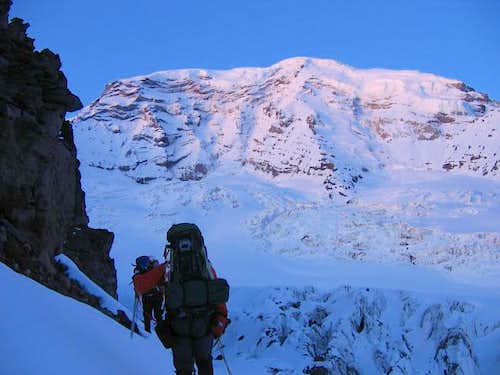 From Curtis ridge find a descent ramp down to impressive Carbon Glacier. Navigate between the crevasses and aim for the nose of Liberty Ridge. For those without prior experience on a major glaciers this hike might be intimidating. Once at the base of the ridge find your way to gain the crest. Slopes on the right side are less difficult and contain less rotten rock. However, it is possible to join the ridge from the left side.

After cresting the ridge, climb mainly on it's west (right) side to avoid rotten rock. 30-40 degree snow slopes and occasional scramble over loose rock may be encountered on the way to Thumb Rock (10,800 ft). Even though some people climb the route in a day car to car, majority spent their second night camping here. It is a logical location to camp because it has flat spots and is relatively safe from rock fall. If you expect company, it is wise to leave early from your camp on Curtis Ridge- camping spots at Thumb Rock are limited. Another good reason to leave your camp early, is to avoid being on Carbon glacier during the warmest time of day. Check out the avalanches running down from Willis and Liberty Walls while you are out there, videos can impress some of your facebook friends! 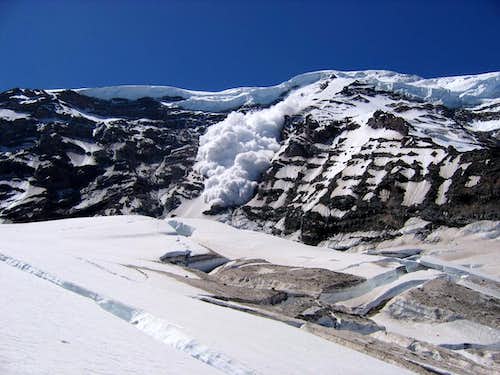 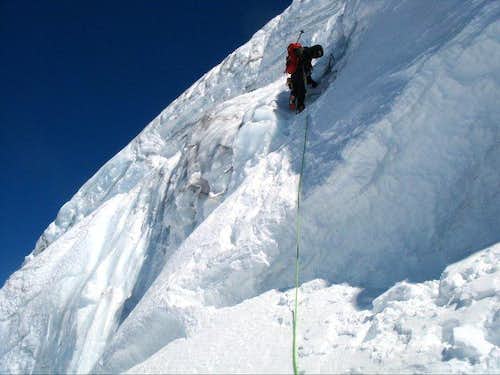 Climbing over the shrund is usually the crux. Photo by phillipwortman

From camp by Thumb Rock start your summit day climbing on the east side of the ridge for the easy variation. At times an ice flow (wi3) forms up the main gully, which can make a nice alternative variation. Climbing towards Black Pyramid is straight forward on 40 degree snow/ice slopes. At times a rock band (3-4th class) must be scrambled over (usually in late season) to gain access to the slopes bellow Black Pyramid. You pass the Black Pyramid on the east side on the slopes to 50 degrees, after which the angle drops down to 30-40 degrees. Steeper variation to the route could be found to the west.
Climb up towards the bergshrund where the angle steepens. This usually is the crux of the route and can range with difficulty from a steep ramp to WI3. Another two 60M pitches of 40-50 degree alpine ice will take you to mild snow slopes. Proceed to the top of Liberty Cap! Don't forget, you are still on a glacier and proper glacier travel precautions are still in effect. There were multiple crevasse falls reported in the area between Liberty Cap and true summit. Descent is down the Emmons Glacier. 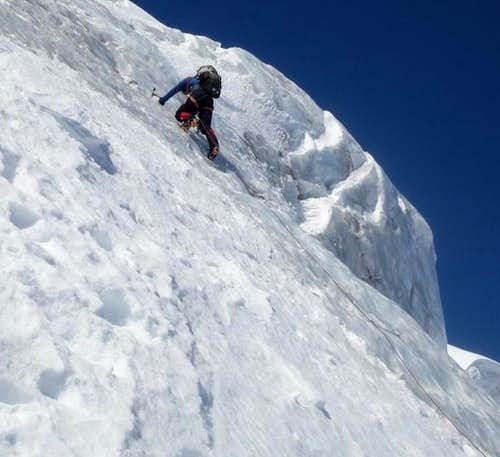 Roads: Check on roads conditions before committing to the trip http://www.nps.gov/mora/planyourvisit/road-status.htm

Permits: Required for all who plan to climb above 10,000 feet or onto any glaciers. All climbers must present or purchase their Mount Rainier Climbing Pass and a valid photo I.D. at the time they register for their climb. To obtain a climbing permit each climbing party must complete and submit (in person) a climbing registration card. Solo travel above high camps or anywhere on glaciers is not permitted except with prior written permission from the Superintendent. More informations on permits is found here: http://www.nps.gov/mora/planyourvisit/climbing-reservation-policies.htm 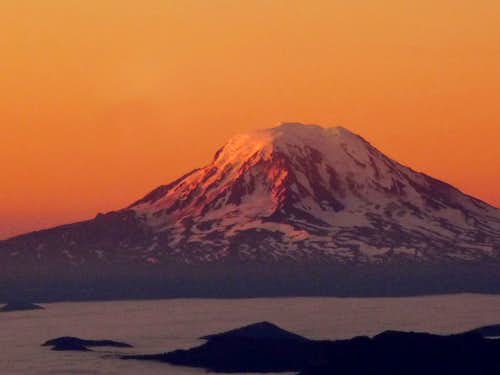 Alpine-glow on Rainier. Who said volcanoes are not beautiful? Photo by Josh Lewis 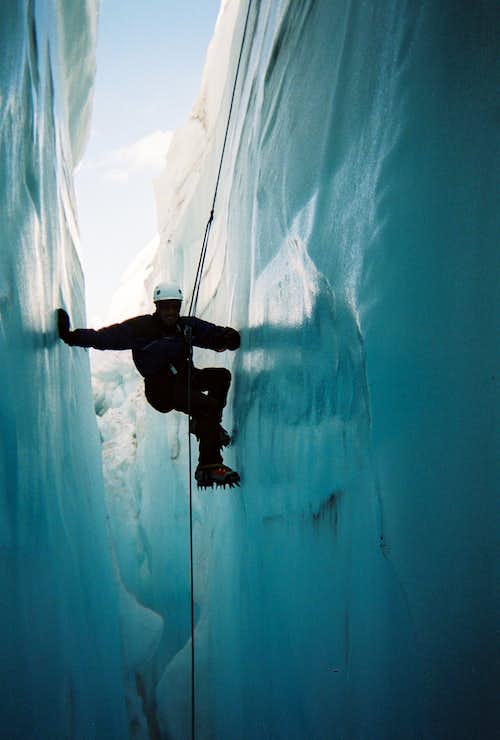 Crevasses on Rainier are HUGE, be alert. Picture from renogurt