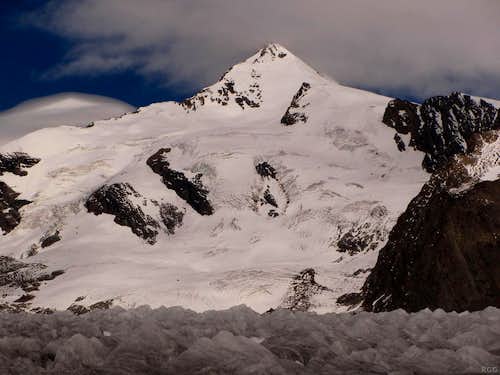 Zooming in on the Trugberg (3933m) from the Aletsch Glacier. Below the lenticular cloud on the far left, further back and therefore seemingly just an insignificant shoulder, is Mönch (4107m)
We met up in the south of Switzerland by the end of August, 2014. The two previous years Mark and I had been climbing in the Alps together, having a great time and fulfilling some long standing dreams. This time Mark had brought along Keith, his son, who had almost no experience in the mountains but was eager to learn. 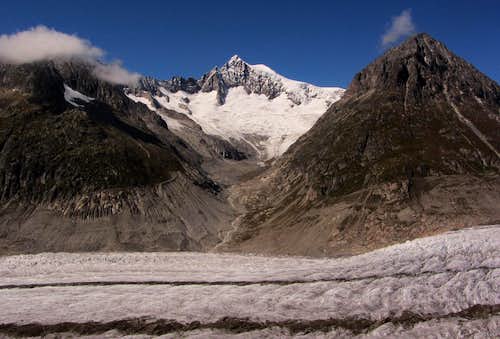 Looking up the Mittelaletschgletscher to Aletschhorn (4193m)
While I was already travelling in the Alps for a long time, Mark and Keith came straight from the English lowlands, so before we could seriously think of climbing some of the many big and beautiful peaks, they would have to get used to the thin air. And with that in mind, Mark proposed we take a couple of days working our way up the Grand Aletsch Glacier, culminating in climbing the Mönch (4107m) and Aletschhorn (4193m).

As happens so often in the mountains, things didn't quite go according to plan. To make a long story short, we hiked up part of the Grand Aletsch Glacier alright, and then we turned around and hiked back down. Why, you might ask? Well, for that you'll have to read the trip report that Mark is planning to post real soon.

For now, this album shows a selection of my pictures. 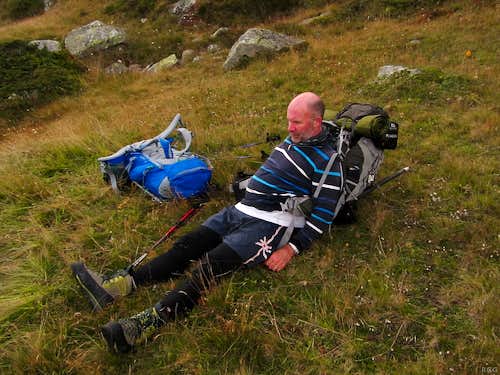 I love a good glacier story

Re: I love a good glacier story

Thanks Mike. I'm looking forward to that TR myself too.