Failure on a High Peak

EDITOR'S NOTE: Every month, you will be taken to the highest point of a U.S. state with columnist Adam Fox as he continues his quest for all 50 (34 completed so far).

The route was nothing I hadn’t completed before — and that was the problem — it was the same mountain. Where was my escape?

Longs Peak in Rocky Mountain National Park (RMNP) in Colorado was the first high summit I didn’t bag — my first turn back, my first walk of shame past all the other climbers as they asked, “How was it up there?”

“Didn’t make it, turned around a half-mile from the summit.”

Logistically, there were no problems. I acclimated for two days at 8,000 feet, pounding water to increase white blood cell traffic. Memorized the topo map, the route, read trip reports, studied Google earth to locate water sources so I could only carry one Nalgene, did cardio training for two months before, the top of my touring bag was turned into a day pack and stuffed with caffeine-laced power gels and Cliff Bars — I was ready to be fast and light.

Got up at 2 a.m. in Estes Park, drove 15 minutes to the trailhead and began my solo ascent. The first two miles were in the pine forests and I kept waiting for a mountain lion to jump out through the darkness. I’d turn around with my headlamp, expecting to see glowing eyes crouching in the bush.

Fortunately, the first six miles of the Longs Peak trail was well traveled and established, so cougar and bear stayed away.

After a half-dozen miles, the trail faded into a boulderfield, and it was all route finding from there. Jumping across boulders that were the size of cars, to a keyhole rock formation that would slip you onto the backside of Longs.

From there, you followed along what was known as “The Ledges,” and there were many areas that if you slipped, you would fall far and fast.

From the cliff face of The Ledges, the next step is up The Trough that connected to The Homestretch and the summit.

Halfway up the Trough, I just didn’t want to be there anymore. At 6-foot-1, weighing 185 pounds isn’t that bad, but every ounce counts, and my normal climbing weight for an expedition is a lean 163. I felt slow. And dizzy. Compression breathing wasn’t helping.

For the first time I asked myself, “What if you just turned around? Didn’t complete the climb?”

The highest point of Colorado, Mt. Elbert, was bagged years ago, and Longs was just supposed to be a fun hike in the middle of doing Kansas and Nebraska highpoints. But I wasn’t haven’t any fun. So I took a step down and began the descent.

Four days earlier, I was standing on the top of Kansas. Everyone laughed about the summit of “flat” Kansas, but the highpoint elevation isn’t at 945’ like Topeka, or 869’ like Kansas City, but right on the Colorado state line, where the foothills of the Rockies began.

At 4,039 feet, Mount Sunflower is a true climbing expedition, where most people die trying to reach — OK, I’m lying, it’s not really a mountain and you can drive your car to the top.

My family and I flew to Denver for a week long vacation in RMNP, but since the Kansas highpoint was only 3.5 hours away, I just had to grab that real quick. Let’s just say my family was less than thrilled, after flying across the country, to see the glorious Rocky Mountains fading away in the rear view mirror as we headed towards the golden wheat glory of Kansas.

Interstate-70 in eastern Colorado was beyond boring, and only when we got off the interstate, just before the state line, and the sign said “pavement ends,” did the real visual stimulation begin.

It was an endless Sahara of dust and fields and a vantage point so vast the horizon could be mistaken for the ocean. Semis hauling crops were the only vehicles we passed, and we had to come to a complete stop when they went by, as the rust clouds whited-out the road like the Mint 400 motorcycle race in “Fear and Loathing.”

My cellmate, our two boys and I were alone when we parked on the prairie grass next to the highpoint marker. 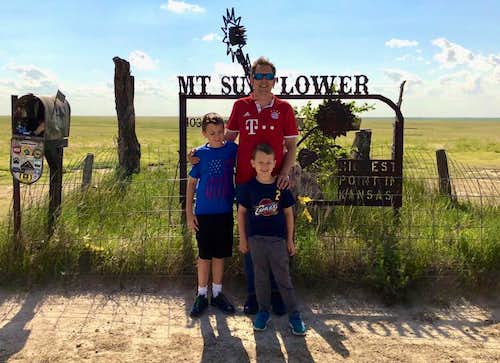 The Kia Sportage rental was so coated in brown you could drag your hand across the back window and make snowballs. From there it was off to Estes Park, Colorado, to hike and climb in RMNP.

After the mountain gods rejected me on Longs, I was devastated. Was it karma for the rope incident on Gannett Peak in Wyoming last year? Could the mountain feel my lack of desire and motivation? The Nebraska highpoint trip was called off. The climbing season had mentally closed.

On the last day of vacation, I was outside my cabin leaning on the car as the light misty mountain afternoon rain began to roll in. The peaks were shrouded in clouds, but the road, the road was open and free. The blacktop winked at me.

“Honey,” I yelled, “I gotta run to Nebraska real quick, OK? Be back in seven hours, we won’t miss our flight I promise..."