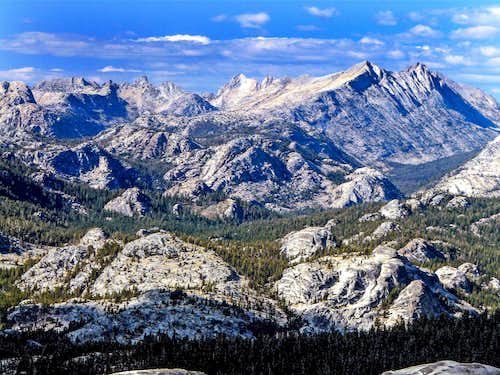 Sierra Crest from Fairview Dome
"One of the best general views...is from the top of Fairview Dome...the summit is burnished and scored like the sides and base, the scratches and striae indicating that the mighty Tuolumne Glacier swept over it as if it were a mere boulder in the bottom of a channel...A few erratic boulders, nicely poised on it's crown, tell an interesting story. They came from the summit of peaks 12 miles away, drifting like chips on a frozen sea, and were stranded here when the top of the monument emerged from the ice."


These are the words of John Muir who made the first ascent of Fairview Dome by this route. This is the scrambler's route for those looking to bag the dome and enjoy the fine views without the sporting challenge of a vertical route which Fairview is well known for.


This is a straight forward climb up the south slope from off the John Muir Trail out of Tuolumne Meadows that can be easily be done in half a day.
The route which is up shear slabs with nothing to hold onto can be a little intimidating but not too dangerous. There are a few places where caution is advised. You don't want to go skipping up this sucker in penny loafers! 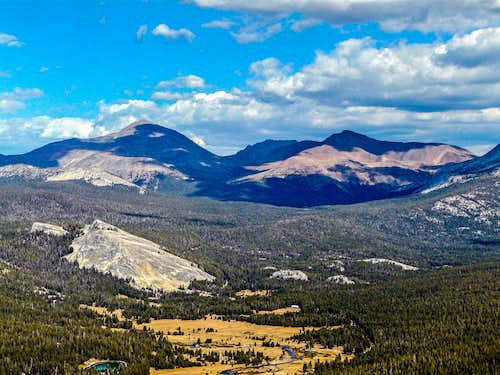 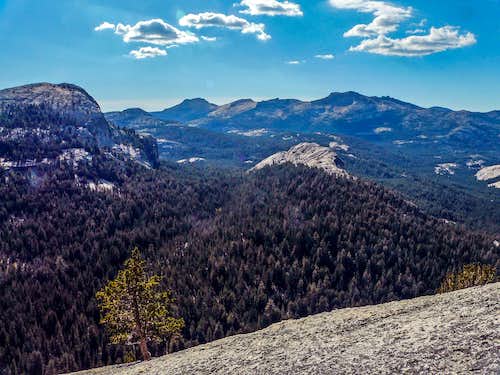 Hoffman Range from Fairview Dome
Take the John Muir Trail south about 1 mile. Break off trail west through forest to the foot of the south slope. Scramble up the 30+ degree slope which levels off before the high point about .3 miles from the base.
The route is about 3.5 miles round trip with 1,200' el. gain.

Shoes with good traction soles for granite.
Basic clothing for Sierra weather which can change rapidly. Maybe a snack for the summit.

Be sure of starting at the very nose.

When attempting this route from the bottom, be sure of starting this from the very nose (a good marker right now is a pine tree that looks like a snag but isn't). If you do not do so, the shape of the rock will force you onto steeper and steeper slabs on the southeast face. This route would eventually be 5.0-5.1, not what you want when expecting class 3 and didn't even bring a rope. I suppose I could describe the southeast face as a route, but most people wouldn't be interested in a 5.1RX route.