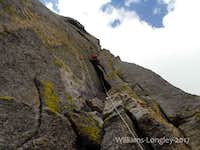 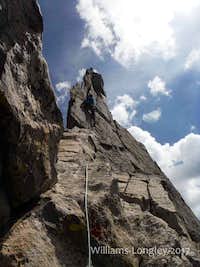 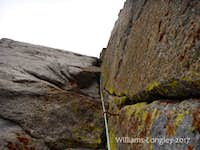 Crux Pitch, 5.10+
Charlie Fowler and Jeff Lowe scored two first ascents in 1979 in the Wind River Range on the same trip, Black Elk (5.11-) and Feather Buttress (5.10+R), both located on Warbonnet Peak. To this day (2017), these two routes are still considered at the top of the food chain in established trad lines for this area. Black Elk is located on the (south) east face of Warbonnet. I climbed Black Elk on my first visit to the Winds in 2014 and returned with the primary purpose of climbing Feather Buttress in 2017. I have climbed Charlie Fowler’s contribution to “Fifty Favorite Climbs: The Ultimate North American Tick List”, Sunlight Buttress, IV, 5.11 in Zion, and consider Black Elk and Feather Buttress better routes in my opinion. Despite the slightly lower technical grade via the crux pitch, Feather Buttress is a more sustained objective than Black Elk. Add to that the fact that Feather Buttress never sees the sun of day, makes for a more challenging climb to be sure. The sustained wide climbing, finger crack/corner of the crux pitch and arête finish make Feather a true classic that should not be missed if capable at climbing this grade. That being said, it sees few ascents. The fact that we picked up four relatively new cams on a bail rap at the top of the first pitch with signs of rust (under snow all winter) indicate that we were the first party of 2017 even though we were climbing past mid-August.

The 2nd pitch starts the business of this route. It enters a squeeze chimney and pulls out at a steep crack (photo) on the right wall, eventually jamming through a chock stone roof. The 3rd pitch involves a run out flared chimney that does the same thing eventually, pulling out onto 5.10 cracks. The 4th pitch is a traversing pitch that lands you at the base of the crux pitch, a sustained finger crack/corner that goes for a full rope length. The 6th pitch is another traversing/route finding pitch in the opposite direction as the previous traverse pitch. The route is topped off with the infamous arête pitch which is not as bad as has been made out. It actually protects fairly well to the top of the summit ridge. From there, un rope and scramble to the summit. It is not easy to retreat from this route and the western sky is blocked by the western walls of the Cirque.

Just head straight for the northwest face of Warbonnet from the traditional campsites for the Cirque. You typically will have to cross a snow field, normally frozen in the early am. Then follow scree laden ledges trending up and right until below an obvious left to right ramp system that will land you under the wide left facing chimney system above (only signicant crack system of its kind on this wall) in one pitch. You need to climb straight up a chossy crack for about 80’ (photo) before gaining the ramp (photo) that leads right to the base of the main corner system.

1st Pitch- 200’- 5.7/ Two hundred feet of rope +/- gets you to the base of the obvious left facing squeeze chimney. On our ascent, we passed a bail nest comprised of four fairly new cams, fancy carabiners and slings (obviously someone inexperienced bailed 100’ up the route). There were no other bail raps en-route. These cams had rust on their pivots indicating they had been under snow for the past season. That would equate to us more than likely being the first ascent of Feather in 2017, mid-August. Conditions were quite cold, but completely dry. On this first pitch, just angle up and right. Mountain Project (MP) posters act like this is horrible rock (“one of the worst pitches we have ever climbed”), but I have seen much worse. They also indicated protection was “sparse”. Again, looked like plenty of pro to us.

2nd Pitch- 100’- 5.10/ The rest of the climbing on Feather Buttress is sustained at the grade. Enter the squeeze chimney (there is pro where you need it) and chimney up. Pay attention to start climbing to the outside of the chimney as soon as a hand crack appears on the outside wall (photo) to avoid difficult chimney and off width moves further up and into the chimney. Near the top top, pull (stem) out over a chock stone to the base of a massive flared chimney. MP references to pitons but we did not see any; easy gear belay to be had.

3rd Pitch- 190’- 5.10/ Again, MP posters seem to exaggerate by claiming this is some sort of run out death trap. Reality is that if you can chimney climb competently, i.e. a causal chimney route like Epinephrine in Red Rock, this pitch will not be any more difficult whilst inside the chimney. The 5.10 climbing appears when you exit and start stemming (a bit of off width) and climbing the right facing corner. The last 50’ is casual 5th class to a shoulder ledge with blocks. Start out from the belay (comfortable ledges at the base) and chimney your way up. If you stay to the outside, you can chimney more than squeeze and the rock quality is more sound. If you stay in, where you can place C4 #5’s and 6’s, the rock will be gritty and chossy. If you just brought one #4 as we did, you will have a 50’ run out between some smaller gear early on and when the #4 will finally fit. If I climbed the route again, I would stay entirely to the outside until I could get a piece in where in clamps down and you have to exit to the 5.10 corner.

4th Pitch- 130’- 5.10-/ Although rated on MP as 5.10-, it is difficult to find a 5.10a move on this pitch as most of it is 5.9 or less. Step across to the left and climb the wide ramp via cracks up to where it pinches down and traverses exposed ground to the right (rail of sorts). MP referenced “poor pro” on this exposed rail, but I thought it protected adequately. Make a dramatic move or two up the corner you come to and belay in a pod (stance) below the massive corner above.

5th Pitch- 160’- 5.10+/ This is definitely the most sustained (crux) pitch of the route. Head up the massive corner with a crack in the right wall as well. As it steepens, you pull a bulge on fingers (crux). After that the corner opens up to chimney allowing for easier stemming. Continue up and pull an easier roof (hands) over chock stones. Continue on easier ground to a comfortable belay.

6th Pitch- 200’- 5.10-/ This is the most traversing pitch of the climb setting you up for the infamous summit arête pitch. This was the first real route finding needed on this fairly straight forward route (you have been following two major crack systems to this point). Head straight out left. I tried several different things, but the one that makes sense is to step down onto obvious flat steps and keep traversing left, climbing up a meter or two (extend your pro) and then continue left to the base of a right facing finger corner. Climb the corner to its top (5.10-; 30’)) and step around left to an easy arête that leads up to the ridge. I set up the belay close to the very base of the steep arête finish at a full rope length with plenty of rope drag.

7th Pitch- 200’- 5.9/ Much is made to do about this pitch on MP and even the guide book exclaims: “the wildest 5.9 pitch in America”. In reality it is much tamer than it sounds. Most of this arête pitch is actually well protected via various cracks on the right side. Towards the top, when you cross over from the right to the left and have several meters to gain to reach the arête again, is the crux which takes rps, etc. In fact there was a fixed nut there as of 2017. Most competent teams would un-rope from here.

Scramble the slab down into a summit notch along the ridge and scramble back up the other side following easy terrain to the true summit. From there descend down to an obvious gully. If you have climbed Black Elk, you will recognize this gully. Follow a faint climbers trail that traverses the gully right and look for an exit out right onto a much broader plateau that descends all the way down to the col between Sundance Pinnacle and Warbonnet.  The further you descend to the right, the less steep the cliffs will be below.   Descend the col via a well-traveled, but chossy, climbers trail back to the hiking trail that heads back to Big Sandy Lake or up to the pass. Stay right on descent to avoid the least amount of boulder hopping which is more severe the closer you descend near Warbonnet.

Single 60m rope works just fine but keep in mind that there were no fixed or slung raps for a potential retreat in 2017. Slower parties or parties at the edge of their grade might consider double ropes. We took a standard single to C4#4 and doubles to #3 with at least ten shoulder length slings. If you wanted to stay light, I could see one justifying a single #5 instead of a #4 as it would actually come in more useful. If you wanted more pro (less run out) , you could also justify a single to #6, double to #2. Wires and/or a few off sets are useful. Haul approach shoes for the long walk off.

Do not underestimate how cold this climb can be. On my first visit, I climbed Black Elk and had plans to climb Feather but determined it was too cold whilst climbing a route on Warrior 1 to the right. Warrior does receive sun and we were cold in the sun on that route. We stared into Feather the whole day and could tell it was going to be brutally cold. On this trip, it was hell or high water for me and despite the temps being on the cold side, we climbed it anyway. We were damn cold at the belays. The route never sees sun. Black Elk in contrast receives good morning sun. Another issue is moisture. We found it dry during mid-August. I imagine it could be a wet route earlier than that depending on the snow pack.