Dow leading the crux pitch (2nd)
Mount Allgood is one of the more obscure objectives in Zion National Park. Even though it graces Springdale’s eastern skyline with its presence, Mount Allgood's profile gets lost between Johnson Mountain and the Watchman. There are only two published routes to the summit as of 2017 on Mount Allgood: Final Seconds and the Greer. Final Seconds was established in 2007 by Zach Lee and Bryan Bird. It is, as to be expected, a chossy affair. There is no fixed gear on the route and Mount Allgood offers a decent scramble/hike off via its col with Johnson Mountain. Mount Allgood faces west to northwest offering ample shade for the approach. 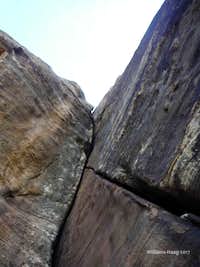 Closer look at the crux of the route
It took me five, mostly long, pitches to reach the summit. Bird mentions in his guide that the first two pitches and last offer decent climbing. The 2nd pitch is by far the premium of those pitches and fairly sustained and stout for the grade. The 1st pitch has the best rock. The 3rd and 4th pitches offer the worse rock. The last pitch is run-out and offers several variations of difficulty in which to finish the route. 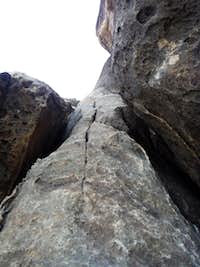 1st Pitch
There are three possible approaches. Watchman’s west face, Johnsons West face or straight up from a subdivision located on the east side of the Virgin River. I prefer the Johnson Mountain approach and then at the end of the day a descent straight down to the river which requires delicate route finding through the lower cliff band.  The ground is too soft to make this direct descent appealing for the approach.  For the Johnson Mountain approach, park at the city River Park in Springdale. Walk north from the park and cross the car bridge over the river. On the other side, follow a trail that trends right to a faint road. Follow this road left through a red gate and up to a utility station. The road obviously ends here. The trail from here is rather faint but you should meander in and out of a few cairns along the way. Circumvent the hill to your right on its left flank and head east until you can descend the drainage on your left and head up the next hill to your left without much elevation loss and gain. From there kind of stay to the top of the hills/ridges as they merge into a final ridge that aims northeast for the camouflaged repeater station. At times you are on the ridge proper and get a great view of the privately owned fertile valley and reservoir to the south. From the station, traverse north ascending when necessary to avoid the worse of the deepest sections of the troughs you must cross. You find faint sheep trails here and there that stay high in the drainage's coming down the west face of Johnson, but you also stay well below the base of the wall. In other words doing your best to avoid unnecessary elevation loss and regain. Head all the way to the very north end of Johnson Mountain. Your descent will come down from the col between Johnson Mountain and Mount Allgood. Somewhere below this col, leave your larger packs and/or poles. Continue aiming for a ledge that runs just above the bright red sandstone band covering the bottom of the west face of Mount Allgood. Gain this ledge and hike to its north end. You pass below a large cleavage on the face. The base of the route is the next crack system:  a wide start with twin cracks and trees at the base, bushes to climb through as well as a treed ledge at the top of the first pitch. From there the crack system goes straight up, never deviating right or left much. Hiking poles are a help on this sandy approach. Expect approximately 2 hours to reach the base of the route and get suited up.

1st Pitch- 150’- 5.8/ Start up through bushes and ants in the wide section and start working the twin cracks (photo included). Bird references that you need a #6 on your rack, I can only assume this first pitch is one of the instances he was thinking of. However, it protects well with C4 #4’s and you can find a place for a #5 if you bring it which I found more critically needed for other pitches above. Nothing overly memorable about the first pitch other than the rock will be the best you encounter on the entire route. You eventually hit a sandy and treed ledge.  If you walk out right you see an anchor (not accessible) for a single pitch route across on another wall. Final Seconds continue straight up the improbable looking overhanging crack/roof above. The best gear belay, angle wise, is to start climbing the 2nd pitch to reach a decent crack and/or small living tree with enough room for one person. I left my second on the ledge after I brought him up and he could hand me the gear and re-stack the rope and belay me from there, sans ants (which were quite active at the base of the route in March).

2nd Pitch- 180’- 5.9+/ By far the premier pitch of the route. Continue up a left facing corner towards the roof. A “relatively” clean C4#.75 crack shows up in the right wall which helps you protect until you are into the roof itself. Steep climbing in a chossy wide hand crack can probably be quite pumpy for the average 5.9/10 trad leader, but the 5.9+ would be in line compared to many routes in Zion. The crack gets wider and a pair of C4 #4’s becomes quite pertinent. Even possessing two, I walked my 2nd placement up quite a bit until I could place the C4# 5. At that point the climbing eases up. The gear belay is obvious as you land on a false bottom above the roof with a right facing dihedral above.

3rd Pitch- 200’- 5.7/ Climb up the decent right facing dihedral until you are in open space. Then zig-zag through precarious blocks placing gear in a few thoughtful spots until you spot a short narrow chimney up and right. Traverse over to inside the chimney and belay in a decent small-medium crack in the back of it.

4th Pitch- 100’- 5.9+/ Chimney up the chimney reaching the top in short order. Continue into another up and left with large boulders serving as a roof. Chimney up this short chimney and hand rail it out to the lip and pull out of it. The C4 #5 comes in handy again here. The rock is poor and I consider this the most dangerous pitch, both for the leader and the belayer. Delicately climb over many loose blocks covered in sand. If you protect this pitch at all, no matter how much you extend your placements, rope drag will stop you at 100’ (pinched between boulders). Belay is not ideal among the boulders, but you can make due. You are now directly below an orange steep arete.

5th Pitch- 220’- 5.9R/ This is the summit pitch and could have a variety of variation finishes.  If the summit is your goal, continue up and through the squeeze on the left on decent rock.  Chimney up and left to gain a finger crack ramp. Climb it to its top and then climb run out moss cover face holds to the summit ridge (trending left, then right on the ridge).  Belay off of a small tree near the end of your 70m rope. You can un-rope and change shoes.  From here. tag the summit and continue heading south and in short order find a scramble down left off the ridge. 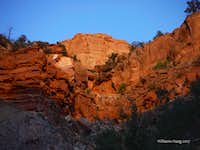 The best option to break through the lower cliff band to reach town directly vs return the approach
From the summit, continue south along the ridge until it becomes obvious and relatively easy to descend the east side. From there, continue south heading for an obvious notch (door width) between Allgood and Johnson. Keep scrambling south along fins of rock until you hit a sandy bottom, then turn right and through the door sized notch to the west. Zig zag down loose ground trending south. The quickest descent back to your vehicle no matter where it is parked is to break through the lower cliff band.  To do that you must find the sweet spot.  Of course you will not have any visual from above.  From the bottom of the notch, trend left and descend the sandy cactus filled slopes. You will eventually hit the top of the cliff band. More than likely you are still too far right. Head south if you are in question. You are looking for a finger of slope that extends below the first cliff band but will be cliffed out again at its terminus. Then descend south into a drainage looking for a short down climb, maybe two moves, that gets you down to firm ground that can eventually be descended all the way into a wash. This wash leads to a nice sub division on this side of the river. If you parked at the city park as I advised for the ascent, take the 2nd left on the subdivision roads and continue straight. One home's gravel drive bleeds into a public trail along the east side of the river.  Follow this trail all the way back until you can return back right to the bridge you crossed at the beginning of the day. Using this obvious sub division on the east side of the river as a target might help you find the tricky cliff break.   The break lines up pretty close with the black paved road that extends east from this subdivision. This is a much faster descent on mostly soft ground then retracing your steps of the ascent, but would make for a poor ascent because it is so soft not to mention you cannot park in that sub division. That bridge will be gated.

70m rope.  Hiking poles help with both ascent and descent as it is so sandy. Bird’s guide calls for a single C4#6 but I did not take it nor did I see the need for it. However, double C4#.75 through #4’s was used. I also took a #5 and was glad to have it, but could see making do without it. A single to C4#.5. Nothing micro, cams or nuts, as the rock is so soft anyway. I took no wires. 8-10 shoulder length slings. Helmets would be advised, so would decent approach shoes which you should hump up the route for the descent.