Located on the Continental Divide in the most glaciated area in the Rocky Mountain states, Gannett is the highest point not in only in Wyoming but in the entire Central Rockies including all surrounding states except Colorado. It is the highest point of land for 300 miles in any direction making it a popular mountaineering objective. It is one of the most remote and challenging points of land to reach in the contig. The current datasheet lists the elevation at 13,809' (4209m).

Gannett Peak presents a different character from each side. There are over a dozen routes but only four (and their variations) are repeated with any frequency. Note: This is not a detailed description of each route but rather a photographic and introductory comparison.

All routes on Gannett are normally accessed via a two-day approach and require crampons, ice axe, rope and a small rack.

The SE/Gooseneck Glacier side contains the Gooseneck Route (named for a pinnacle on the SE ridge). This route offers the highest chance of success and safety and is the route of choice for at least 90% of parties. The two most popular and straightforward approaches lead to this side. There is only one technical climbing pitch and the chief difficulties are over after about 40 feet (except for the exposed summit ridge and the objective dangers inherent in live glacier crossings). The route is very dependant on seasonal fluctuations and the shape of the bergschrund. When the 'schrund is sealed, and there is a lot of snow, the couloir above might go as easy as Class 4. If the bridge has collapsed, rock to climber's left can be climbed at Class 5.1 . The Gooseneck crux can not be seen from Bonney Pass. The couloir visible from there is a variation (sometimes in good shape but more sustained). Probably the second most popular side. The standard route on this face offers the simplest approach. The standard North Face route goes straight up Gannett Glacier through the rock band to either the summit snow dome or the top of the north ridge. In good conditions it is a straightforward climb all the way. It is slightly steeper overall and more sustained than the Gooseneck Route but holds snow conditions longer. Gannett Glacier and the North Face from Dinwoody Valley.

The West Face of Gannett from the foot of Minor Glacier.
The diagonal couloir heading up and left leads to Class 4 terrain on the north ridge. A few parties a year use this route which has the most difficult (to Class 5) of the approaches. Minor Glacier is at the head of a hanging valley (Wells Creek) which ends in a series of waterfalls and cliffs rising thousands of feet above Three Forks Park. West Face from below.

The SW aspect contains the two couloirs seen in the middle. They can be approached from Peak Lake and climbers based there sometimes use these routes. They go at easy Class 5 but have some loose rock. SE aspect as viewed from Bonney Pass. The standard Gooseneck route is not visible but two variations are. The couloir left of center also leads to the Gooseneck Ridge which, in turn, leads to the summit ridge. On the right, the wide tongue of Gooseneck Glacier is an alternate approach to the North Face. 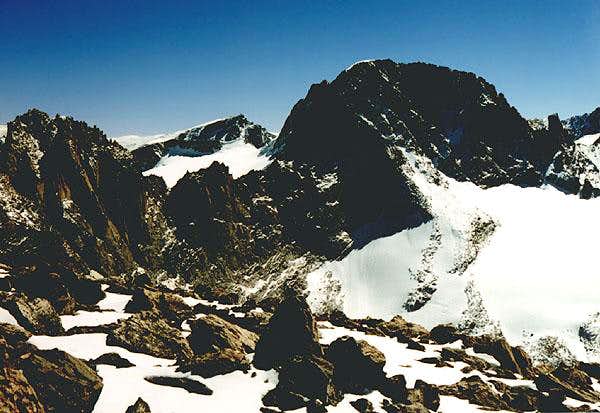 Mount Koven, Sunbeam Peak and Gannett from the NW.

A very different and informative layout! Inspiring and practical use of the album format. Well done!

This is a good album