Mojanda is an inactive large stratovolcano of the Western Cordillera of the Andes in northern Ecuador. Located 85 Km north of Quito and 17 Km south of the indigenous town of Otavalo, it became one of the most popular Ecuadorian tourist destinations in 2008, after receiving protected status by the government. 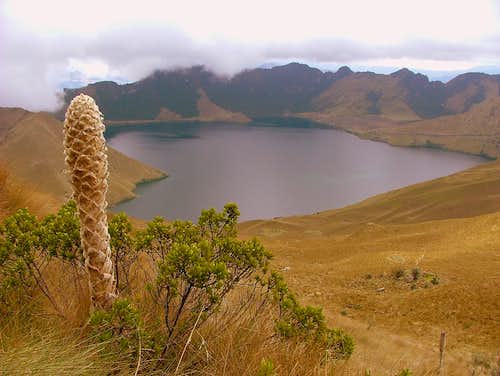 Mojanda Volcanic Complex
Three beautiful turquoise crater lakes occupy its summit caldera, which was produced by an explosive Plinian Eruption that marked the end of Mojanda volcanic activity 200,000 years ago. Those three lakes are:

Mojanda is actually a complex of two volcanoes which were active simultaneously. The volcanic vents are only 3 km apart. The other volcano, which produced at least two Plinian Eruptions of its own is known as Fuya Fuya.

Fuya Fuya partially collapsed around 165,00 years ago, creating a large caldera to the west. A new volcanic cone and other lava domes subsequently extruded inside the caldera, probably during the Late Pleistocene.

The high altitude grasslands and shrublands of Mojanda, which lie above the cloudforest, are collectively known as paramo. They are frequently grazed by cattle.

A single dated eruption of Mojanda occurred 1,450,000 years ago. Part of its crater rim reaches altitudes above 4,000 meters like the southeastern crater rim known as Cerro Negro or Yanaurcu. Mojanda has not erupted in historical time.

Take the Pan-American Highway north toward the town of Tabacundo. Two blocks before getting to the town's main road (the street that takes you up to the church) there's a football field at the left side of the highway. Just beyond the football field, you should see a sign for Mojanda where you turn left and follow the cobblestone road which becomes muddy, full of potholes and in bad conditions later on. Continue on the road for about 40 minutes until reaching a high pass which is part of Mojanda's crater rim and the trailhead to Cerro Negro.
As soon as the road reaches the pass, the three crater lakes of Mojanda will come into view, as well as Cerro Fuya Fuya to the northwest. A 20 – minute - downhill ride inside the crater will take you to Fuya Fuya's trailhead.

There are signs for the Lagunas de Mojanda turnoff on the Panamericana Highway, basically on the southwest side of Otavalo where Sucre street intersects the Panamericana Highway, 1 Km north after the traffic circle.
The westbound road reaches a Y junction a few blocks after leaving the highway. Take the road on the left side, pass by Rincon del Viajero campground (on your right) and continue on for about 20 minutes until you reach Lagunas de Mojanda (3,700 m / 12,139 ft). The jagged peak of Fuya Fuya is easily visible at the right side of the road.

Climbs can be done all year round in Ecuador. June, July and August are considered summer months in Ecuador featuring extremely strong winds on high elevations. Even though November, December and January are considered winter months, they are also the best for mountaineering in Ecuador.

(4,263 m / 13,986 ft)
Start the climb up Fuya Fuya from the trailhead at Laguna Grande. The entire trail is 1.92 km and runs through knee-high grass vegetation and achupallas (andean tall pineapples). There are well-positioned signs along the route that show the direction to follow and the distance already hiked. The climb gradually becomes steeper as you gain altitude. The trail ends up at the saddle between Fuya Fuya's two summits. 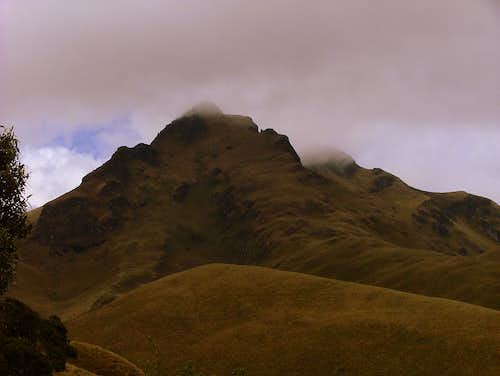 Once at the saddle, the main summit is at your left side (west) but it is not visited often because of its 4th Class pass located just below the summit (easy to negotiate in dry conditions). The second summit and the most frequented is the eastern summit, at the right side of the saddle. There is an easy 3rd Class scramble a few meters below the summit. Consider dropping straight down the steep east side of the summit to the lake on the way back, to avoid passing by the saddle again. Each summit can be reached after 15 minutes from the saddle and after one and a half hours or two from the trailhead.

There is a couple of trails clearly visible from the road and the base of Cerro Negro. I recommend the eastern trail. It is the most straightforward route but is worth it as the crater views are much more stunning. 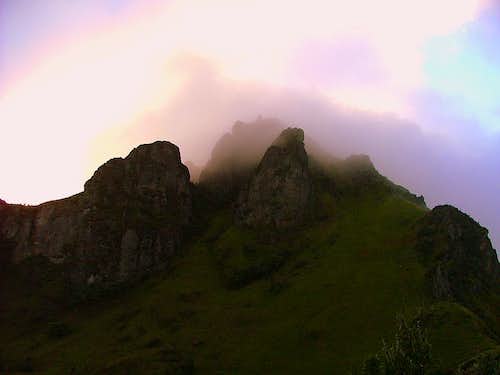 The trailhead starts at Mojanda's crater rim pass, where the road reaches its highest altitude. You can follow any of the various parallel footpaths completely straight up to the summit. There's no way to miss it. The climb takes one to one and a half hours to summit from the trailhead.

About 1.6 Km from the Panamericana Norte turnoff and 15 minutes from Lagunas de Mojanda there is Rincon del Viajero campground. Camping spots are available for USD. 3.00 per person per night.

Camping is allowed in Mojanda and a tent can be set anywhere on the mountains. 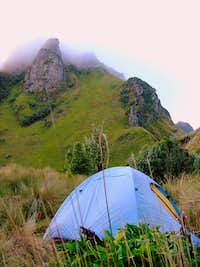 There's also a mud-brick hut located at the northwestern shores of Laguna Grande that can be used as a shelter in case of bad weather or even to spend the night at.

No permits are required to climb or hike in Mojanda.
Theft had been reported in Mojanda in the last years. It's recommendable to be extra cautious with your belongings. Just don't leave them unattended.

Buses can be taken from Quito to Tabacundo or Otavalo at Terminal Terrestre de Carcelen, north of Quito (about USD. 2.50 - two hours). Pick up trucks and taxis can be hired from Otavalo to Lagunas de Mojanda for about USD. 12.00 each way plus USD. 8.00 per hour wait.